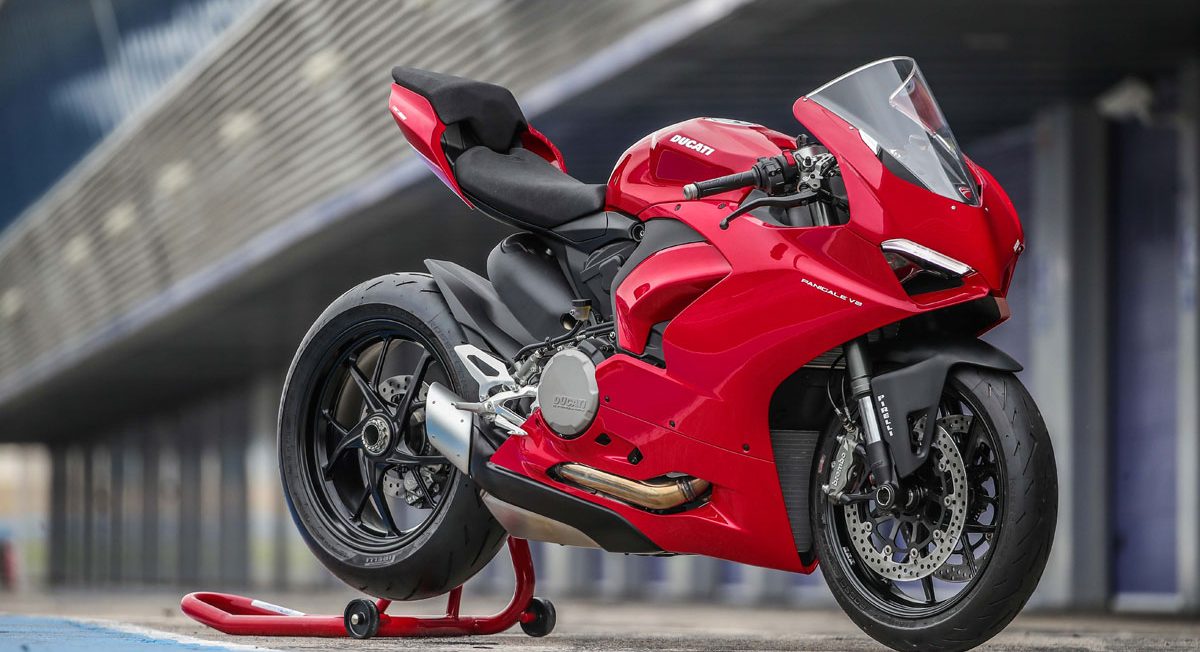 It would be easy to get the wrong idea about the Panigale V2, purely from its name and close resemblance to the Panigale V4 that is among the world’s most powerful and uncompromising superbikes. With its sleek scarlet bodywork, single-sided swing-arm and stubby silencer tucked in on its right side, the V2 looks almost identical apart from lacking the aerodynamic winglets that the 1103cc V4 gains this year.

With the open-class Panigale now packing four cylinders, the V2’s name reflects its status as the flagship of Ducati’s V-twin family. It’s essentially a restyled and subtly tweaked successor to the Panigale 959. And while its name and look have changed, its character and its 955cc, eight-valve desmo V-twin powerplant have not.

As soon as you fire up the Panigale V2 and pull away, it’s clear that this is a much less feisty and demanding machine than the V4. It would be exaggerating to call this singleminded, 160mph super-sports bike a sheep in wolf’s clothing but Ducati are happy to admit that the mid-sized Panigale has been designed for rider-friendliness as much as for pure speed.

Engine-related changes are limited to parts surrounding the 90-degree V-twin unit. The new, twin-layered fairing ducts air more efficiently from slots in its aggressively flared ‘snout’. Along with reworked fuel injectors and the cleverly redesigned exhaust – which replaces the 959’s unloved twin-pipe system – this lifts maximum power output by 5bhp, to 153bhp.

The revamped electronic system uses the latest Bosch IMU to give a full range of Panigale V4-level features. The quick-shifter now works in both directions. Wheelie control, engine brake control and cornering ABS are more sophisticated and faster-acting. So is the traction control, which adds a predictive element – in other words, it not only knows how much the rear tyre is sliding but how much it’s about to slide. Which might sound like science fiction, were it not based on the system from Ducati’s Desmosedici MotoGP missile.

The Panigale V2 doesn’t provide remotely MotoGP-like acceleration, but it’s still a hugely entertaining and rewarding bike to ride. In Sport, the middle of the three riding modes, throttle response is flawless and the bike charges forward urgently, hoovering up straight sections like a bright red Ducati superbike should, but without the ceaseless aggression that makes the V4 both thrilling and slightly intimidating.

With your head tucked behind the low screen the V2 takes very little time to put 150mph on its colourful TFT instrument panel’s speedometer, with a gear still to go. Serious torque is delivered above 8000rpm, and on track you don’t spend much time below that figure, thanks to frequent use of the slick gearbox and reliable two-way shifter. But low-rev running is clean and there’s plenty of midrange grunt, with more than 60 per cent of the maximum torque figure available from 5500rpm.

Chassis performance is similarly obliging, combining sweet steering with stability and excellent suspension control. On standard settings the V2 is slightly more responsive and easy to turn than the 959, though the difference is essentially down to set-up. There’s no change to stopping power, thanks to an identical dry weight of 200kg and retained Brembo M4.32 Monobloc front calipers, which give plenty of bite without the ferocity of the V4’s Stylema units. When braking hard it’s useful to be able to keep body weight over the rear wheel by moving back in the seat, which is 20mm longer than the 959’s.

Rain on the track launch at Jerez gave a useful indication of the Panigale’s roadgoing performance, highlighting its precision of throttle response and steering input. In slippery conditions I was also grateful for the V2’s ultra-capable electronics. Some bikes would doubtless have lapped quicker, even in the wet. But not by much, and possibly without such a wide safety margin.

Even this rider-friendly Panigale is a singleminded sporting weapon, with low bars, firm suspension and little aptitude for motorways or commuting. (If you’re looking for all-round ability, Ducati’s deceptively named SuperSport has much more of that.) But the V2 is distinctly more manageable than its V4 namesake, and with a price roughly 30 per cent lower than the base-model V4’s (at £14,995 in the UK) it’s much easier on the wallet too.

How much it appeals is likely to depend on riding ability and what exactly you want from a sleek red Ducati Panigale. Hardcore track jockeys who relish the fearsome V4’s challenge might find the V-twin slightly tame. But for typical road and occasional track-day riders who prefer a Panigale that is as rideable as it’s quick, the V2 is a sophisticated, thoughtfully improved machine that offers a tempting combination of performance and control.