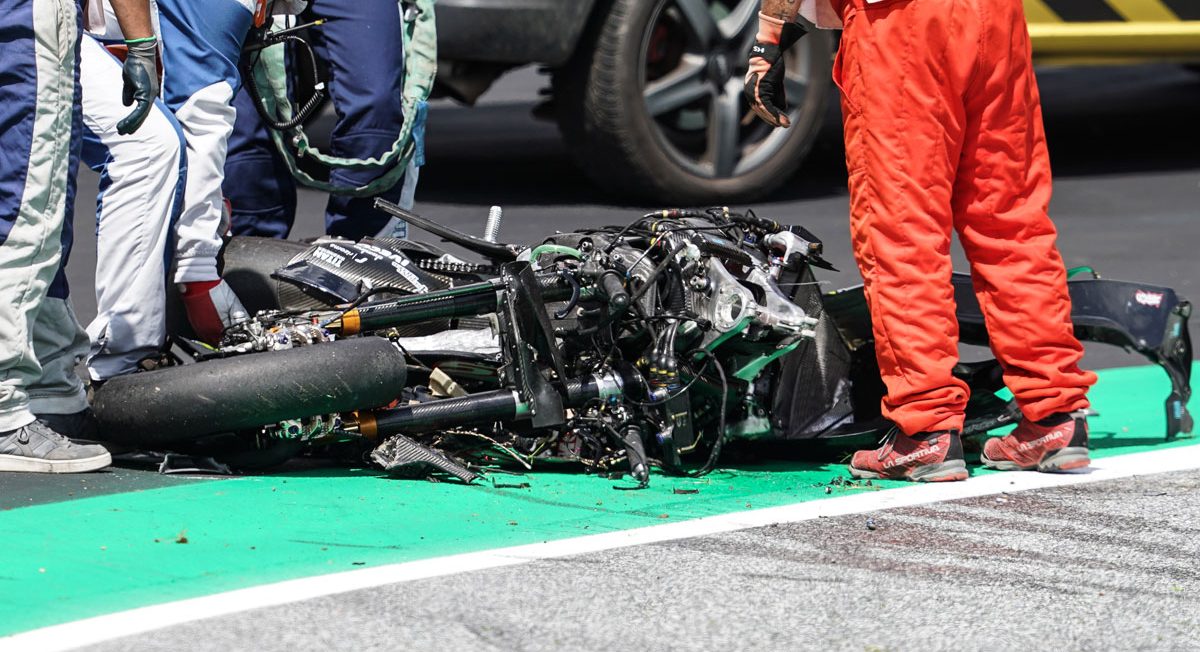 In the lap of the gods

You’ll have seen the videos or photos by now. There was so much to take from Sunday’s Austrian Grand Prix. Andrea Dovizioso’s win and imminent Ducati departure, KTM’s arrival as a genuine force, Joan Mir’s first podium and more…

But the day’s two gasp-inducing crashes put that all in perspective. In particular the sequence of Franco Morbidelli’s Yamaha barrelling through a gap between Maverick Viñales and Valentino Rossi barely two metres wide will be one of the defining images of the season. The Catalan raising his arms in defence as Johann Zarco’s disintegrating Ducati flew inches over his head will be another.

From my experience, the paddock isn’t a particularly religious place. Yet the consequences of this incident – a ‘mere’ cut on Morbidelli’s chin and a fractured scaphoid in Zarco’s right wrist – could only be explained by some form of divine intervention. But for a few inches and a touch of the Racing Gods we would have been reflecting on one of the sport’s darkest ever days.

This was not something that can be shrugged off. On Sunday evening A visibly-shaken Rossi gave the impression this would be an incident he would replay in his mind over and again. “It was terrifying,” he said. “Everybody has to pray to who he decides. I am (still) very scared.”

The sense of relief was heightened by earlier events when Hafizh Syahrin had smashed into Enea Bastianini’s stricken machine on the exit of turn one in the earlier Moto2 encounter. As Miguel Oliveira (Tech 3 KTM) commented on Sunday evening, “They’re the guys that should light a candle for the angels.”

Aside from contemplating the fortune of it all, the MotoGP incident raised some important matters: namely Zarco’s temperament in the heat of battle and the suitability of sections of the potentially lethal Red Bull Ring for machines racing at speeds verging on 200mph.

First of all, it’s worth pointing out this can’t have been an easy week for the Frenchman. Aside from coming to terms with his own lucky escape and throbbing right wrist that will be operated on Wednesday, Zarco faced incendiary accusations on Sunday afternoon. Rossi accused him of “frenare in facia” – an Italian expression for brake checking, or braking when a fellow rider is directly behind. In the heat of the moment Morbidelli went further, telling Sky Sports Italia, “He’s was nearly a killer. Braking like this at 300kph means you have little love for yourself or for those you’re racing with.”

First of all, we can put the idea of Zarco intentionally causing this smash to bed. His move across Morbidelli’s front on that pupil-dilating ascent up toward turn three was misjudged. But saying he had brake checked his pursuer at one of the most lethal stretches of track on the calendar is to accuse him of possessing psychopathic tendencies. For all the eccentricities and his occasionally questionable attitude (think KTM last year), I can’t imagine Zarco being capable of such a mean-spirited act. He’s always good natured and polite, even in difficult moments. He could have been bitter on KTM’s recent rise. But he was magnanimous at Brno. “Brad (Binder) has done the job I wasn’t able to do,” he said just over a week ago.

In Zarco’s defence, the left kink before turn three is one of the calendar’s most challenging points. Danilo Petrucci described the challenges of that pupil-dilating approach, lines of metal barrier just metres to your left. “We arrive at more than 195mph on the left side, we brake and the next corner is on the right. We arrive at maybe 45 or 50 degrees of lean angle, in sixth gear, and then take the front brake there. And there are many lines there, every bike stops in a different way.” Check footage of the approach. Jack Miller’s Ducati drifts out wide from the kink before arching back toward the outside of turn three.

With the speeds involved, the strength and effort to manoeuvre the bike is greater. “The bikes are so fast at 185mph, heavy and then at this speed you cannot change your line in the last moment,” Zarco reasoned. “I tried to keep my line. But in the way I was moving I could not go more on the left and that’s maybe what surprised Franco.”

Yet that’s not to absolve him of all blame. Onboard footage from Alex Rins, just behind at the start of the eighth lap, shows the Frenchman moving across to the right of the track less than three seconds after inching ahead of Morbidelli. Even if altering his line wasn’t physically possible, Zarco should have had more spatial awareness. It seems obvious he should have eased off to hold a tighter line with the burr of Morbidelli’s M1 still present. As Jack Miller explained, “You’ve got to weigh up the risks versus reward through there, especially because the bike is moving so much already.”

It was careless. Done at most points in a calendar and the payoff is a crash at low speed. But this is the circuit’s most dangerous stretch, one whose safety has been debated since we returned here in 2016. It was one of the main concerns voiced in Friday’s Safety Commission meeting, too. There was some sense in Aleix Espargaro’s words, when he pointed to Zarco’s speed advantage. “In the very dangerous places you have to think 80% about you and 20% of the other rider. If it’s a super dangerous point and you’re not sure, wait for the next lap. You have 25 more laps! Why go with 99% risk? It’s not the last lap, he’s not fighting for the victory. Why?”

And the problem for the Frenchman is this wasn’t his first rodeo. I’ll be the first to admit I loved watching Zarco in his Tech 3 Yamaha days. His disregard for reputation and willingness to stick it on the line is exactly what made him regular box office viewing throughout 2017 and ’18. But there were times he rode along that dangerous line of what is acceptable, and very occasionally veered over it. Phillip Island in 2018 is the most memorable example.

In the wake of that race, that day’s podium finishers were highly critical of Zarco’s riding off-camera. You have to believe the double Moto2 champ will have lost the trust of many of his peers in the aftermath of Sunday. And that’s problematic in the extreme in an age when grand prix racing’s margins have never been tighter, and differences in lap time are measured in hundredths of a second, not tenths. It’ll take time to win back that trust.

It is clear changes are needed at this point on the track. Straightening the approach would be an option. Or opening turn three up to a curve that doesn’t leave the riders so exposed when braking is another. Investment will be needed. But as anyone that’s had the pleasure of visiting would attest, Red Bull, the track’s owner, isn’t known for its parsimony. Problem is, there’s no quick solution. And with heavy rain forecast for the coming weekend, we haven’t heard the last of these concerns.

MotoGP got lucky on Sunday. Now join me in taking Oliveira’s instruction by taking a deep breath, lighting a candle and whispering thanks that this resulted in the biggest near miss in memory rather than something much, much worse.