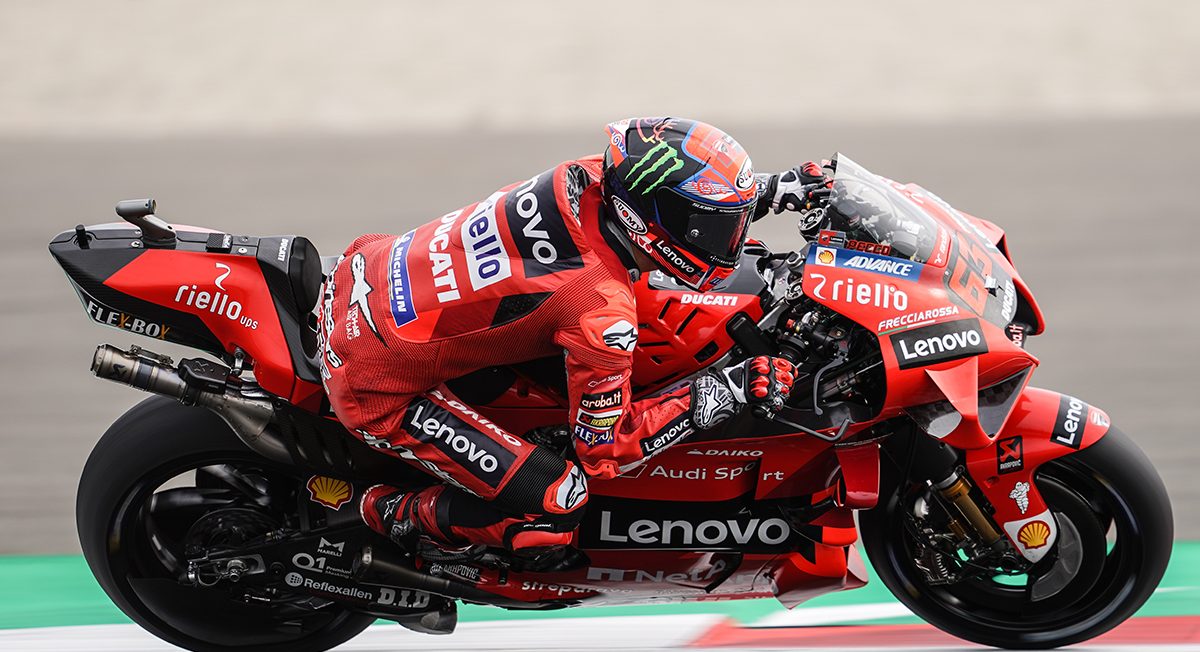 Of all the ways to claim a maiden MotoGP triumph, this will take some beating. Pecco Bagnaia was victorious in an epic late scrap with Marc Marquez at Motorland Aragon, one of the eight-time champion’s favourite tracks, and one where he has won on five of his past seven visits. But, it wasn’t just the result that will have given Bagnaia – and Ducati management – so much heart. His resistance of race-long pressure from Marquez was immense, maintaining unerring consistency despite the serial champ’s closest attentions. From the first of 23 laps to Marquez’s last overtake, the pair were never more than 0.3s apart.

And there were battling instincts in abundance in a breathless finale, as Marquez attacked again and again – seven times in all – over three laps in which the lead went back-and-forth 14 times. In all seven attempts, Bagnaia never once came unstuck. Seven times Marquez darted around him. Seven times the Italian simply waited for his rival to run wide before accelerating under. “He didn’t lose his head, and was so cold,” said Ducati Team Manager Davide Tardozzi. “He was perfect.”

Having either lost his cool (Mugello), qualified poorly (Portimao) or endured some technical gremlins or tyre defect (Styria and Silverstone) when winning potential was there, the 24-year old had to carry greater expectation into this race. There was the small matter of achieving Ducati’s 50th premier class pole on Saturday. Also, mentor Valentino Rossi had talked up his chances after an promising weekend to that point. “The moment has arrived for him to win, to break his taboo,” said the 42-year old.

Bagnaia later confided “I was a bit nervous,” in light of Rossi’s comments. “He never said that to me.” But there was not a sign of that in this performance. Andrea Dovizioso aside, not many have fronted up to a rider of Marquez’s stature and not even flinched. And according to the Catalan, “Pecco was same as Dovizioso but with more corner speed. I didn’t find the place to overtake because he was braking later than me and stopping better the bike and accelerating better.” High praise indeed.

This was more like the rider we saw during his stunning championship year in Moto2 in 2018, when he showed all the characteristics needed to make it to the very top by beating an incredible roster of names including Oliveira, Binder, Mir, Alex Marquez, Marini and Quartararo, to name but a few.

The question is, why has it taken Bagnaia this long to become a race winner? I rather giddily predicted he would be fighting for podium finishes in the first half of his rookie season in 2019. At that time, Ducati was a fine machine, winning seven of the previous year’s 18 races. One of Bagnaia’s great strengths in Moto2 was a commanding presence in braking zones, in line with that of the Desmosedici. And he was paired with Christian Gabbarini, formerly crew chief to Casey Stoner and Jorge Lorenzo, among several other top-class names. His second fastest time at a preseason test at Sepang – only his third outing on a MotoGP machine – suggested he was well on his way.

I was wrong. It took Bagnaia a full season to get to grips with Michelin’s front tyre. A rider that once scored 30 consecutive point-scoring finishes in Moto2 started crashing. And a lot. 14 falls pocked that campaign, battering his confidence. “It’s not easy,” he said that year at Brno. “(In 2018) I was pushing more and crashing less. It’s very difficult to understand that.”

We started to see signs of improvement when last season eventually got underway. He was cruelly denied a second place in the Andalusian Grand Prix by a blown engine, one of Ducati’s bogey tracks. But a crash in free practice at Brno fractured the top of his right tibia. His rapid comeback, which peaked at Misano, had repercussions, however. “I was very tired in my head,” he said of the stresses involved in getting back. The year ended dismally. He collected just eight points from the final six races, a run so miserable it included two early crashes out of 16th and 18th at Aragon.

But what was impressive was how he analysed this run. “Concentration and pushing when we have lower temperatures. I had luck to have Jack as team-mate. He’s very good in this temperature. I have to push without feeling to warm up the tyre.” Intelligence and an ability to work on weaknesses has always been a hallmark through his early career.

And bolstered by a strong off-season, he really hit the ground running in early 2021. Bagnaia’s pedigree really became clear when the series visited two of Ducati’s worst tracks – the Sachsenring and Assen. The Italian’s tyre management was seriously impressive in Germany, while his defensive feats at the front of the Dutch TT were nothing short of sensational.

In him, Ducati management recognise there is a riding style that can minimise the turning defects for which its bike is well known. “For me, one of Pecco’s best characteristics is that he knows how to push the front tyre to the limit like very few other riders are able to do,” said Gigi Dall’Igna at the start of this year. Tardozzi agrees. “Pecco has a different riding style. That was the limit of Dovi, to not carry the corner speed. Now we have Pecco. We enjoyed Dovi’s time but now it’s better to look to the future.”

He continued, “I think he found a good base this year. The bike grew up in the direction he loves. There are several things to give him the confidence to be always fast. He didn’t always have the good results but he’s always been fast, at every circuit, even if he didn’t make them. And Pecco knows one thing: being a top rider means managing the pressure. This is part of the job. I don’t think he will have any problem managing it. He is so intelligent and we absolutely trust that he will have no problem in the future.

“We think this is the first of a series of wins because Pecco will again.” With two races in Misano, where he excelled a year ago, coming up, would you really bet against Bagnaia putting a run together?

By Neil Morrison, Photos by CormacGP