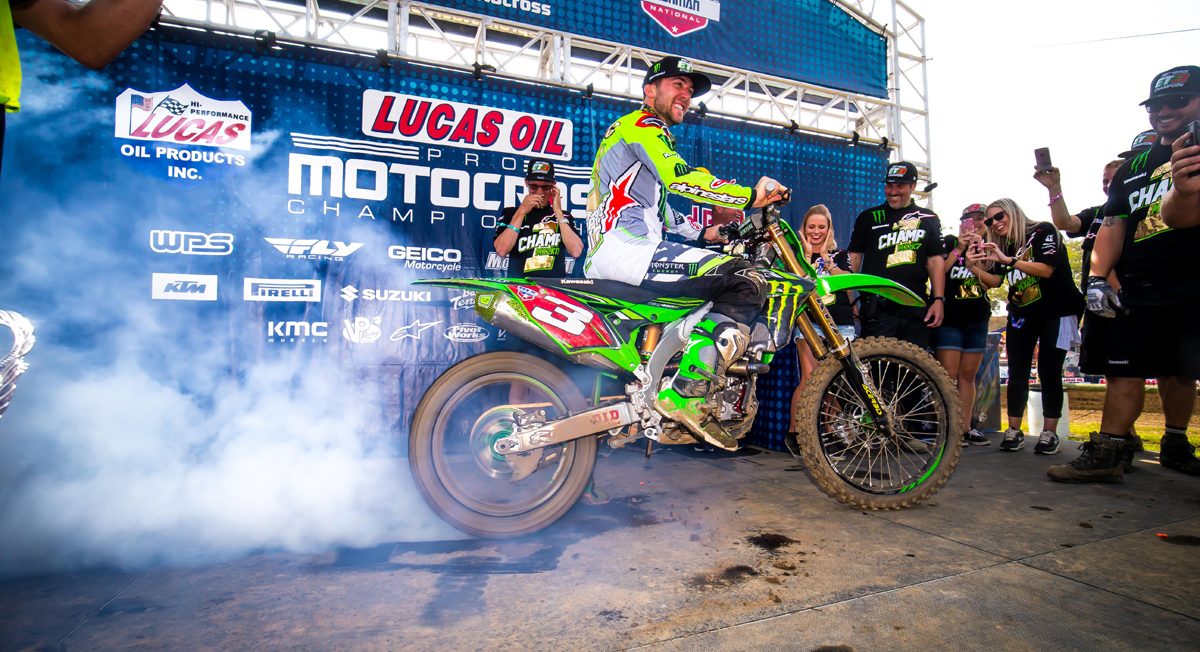 Eli Tomac finished the motocross season in a way he couldn’t in supercross. What a topsy-turvy campaign the Monster Energy Kawasaki rider has waded through. Beginning in 450SX where he fought hard to make up a huge points deficit then promptly gave it all back and lost the title to Ryan Dungey, this 450MX season started with a couple of dominating rides that made all of us feel like he was going to ride away with this title rather easily with Dungey pulling a surprise retirement.

But, yeah, funny things happened on the way to that ‘easy’ title…a mechanical, some bad starts, crashes and before you knew it, his lead was down to less than a moto with three to go. Tomac prevented more questions from mounting with a great second moto ride at Budds Creek two weeks ago but this past weekend in Indiana he crashed pretty hard going after Euro ‘invader’ Jeffrey Herlings and one had to wonder how difficult he was going to make this on himself.

“Yeah, the ego got in the way there,” Tomac told me about going after Herlings in the first moto. “The thing was I could see him making some mistakes and I wasn’t riding out of my comfort zone at all so I figured why not?”

Well, ‘why not’ is risky and Tomac hit some loose dirt and bent his clutch perch down far enough so that it wouldn’t come back up. Clutchless, Tomac proved clutch (see what I did there?) in working up from that crash to fifth place. With Herlings’ win, it meant that all Tomac had to do was score one point in moto two IF Marvin Musquin, of the Red Bull KTM team, won to secure his first 450 title.

Away from the start Tomac and Herlings (who started beside each other in both motos) locked elbows and neither one got off the launch they wanted but at least Tomac was just outside the top ten, Herlings, was way-back before crashing. Tomac played it safe the entire second moto with his ego “in his back pocket” as he said and rode safe and steady to work his way up. Not even a mid-moto pass by Herlings, complete with a look over and tear off pull by the Dutchman, could goad him into leaving his safe zone. 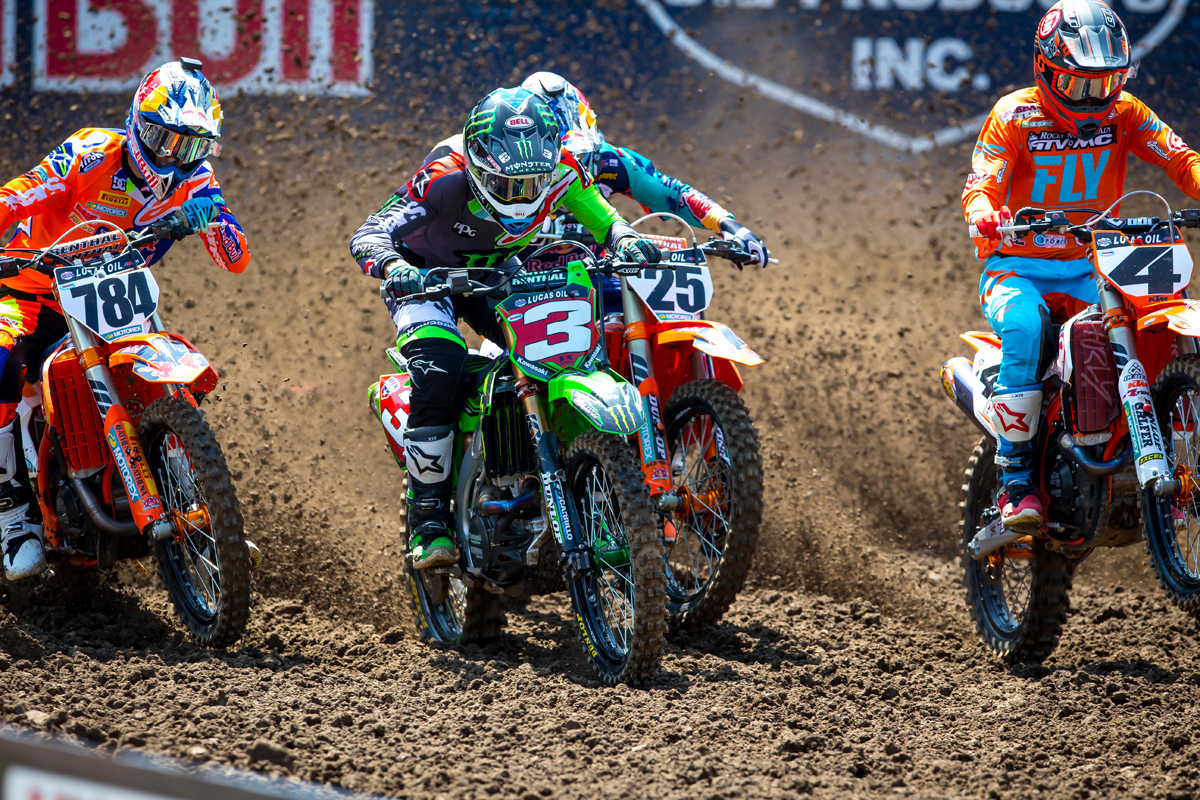 Preferring to leave the battle for this weekend’s USGP in Florida, Tomac did enough in Indiana to bring a title to the green team, it’s first since Ryan Villopoto retired. An indication of just what a crazy up-and-down outdoor term it was provided by the fact that Tomac’s 470 point win total was the lowest in the modern era of just 250’s/450’s. Chad Reed’s 2009 450MX title of 483 is next highest. Pretty remarkable and shows you the inconsistencies not only from Tomac but from Musquin who was injured for a race or two and RM ATV/MC KTM’s Blake Baggett who hurt his thumb at the halfway point and was never the same rider.

With his near miss in 450SX and now this 450MX title in hand, and with Honda’s Ken Roczen a total question mark in terms of whether he can get back to his old level, it’s Tomac that sits atop American SX/MX as the best rider. But unlike the times that names like Dungey, Villopoto, Stewart and Carmichael could claim the same status, Tomac’s hold on the mountaintop seems tenuous. He’s got everything you would want in a ‘king’ but whether it’s the crashes, the bad starts or whatever, he just can’t seem to stamp it right when he’s on the verge of going that way. Whether or not finally closing the deal this motocross season gives him the confidence needed to really assert himself remains to be seen. One theory that I have is that maybe after year-after-year of a dominant rider, we’re entering into an era like the early 90’s where parity ruled before some guy named Jeremy McGrath came along. But then again, you watch him in some indoor and outdoor races and you’re like: “Ah yeah, this dude is SO good.”

I do feel bad for the Eli Tomac fan this season as he or she was probably driven into psychiatric therapy or at least some heart medicine as they tracked Tomac’s various highs and lows. Why can’t he get a start? Why does he take so long to get onto his bike after a crash? How does he dominate one week and then look so mortal the next? And why does he have these weird issues with brakes on his Kawasaki KX450F? Every single time you thought that it was time to print the title t-shirts, something weird happened.

Although it’s taken a little while longer due to injuries and crashes, he’s got the one that some champs say is the hardest to bag. We’ve seen time and time again how important confidence is in this sport and perhaps this will mark the start of the Eli Tomac era where he starts racking up wins and titles. As opposed to those other names listed above where it was pretty much a ‘sure thing’, I’ll have to reserve judgment on the #3 but in one year’s time I also retain the right to say ‘told you so’.