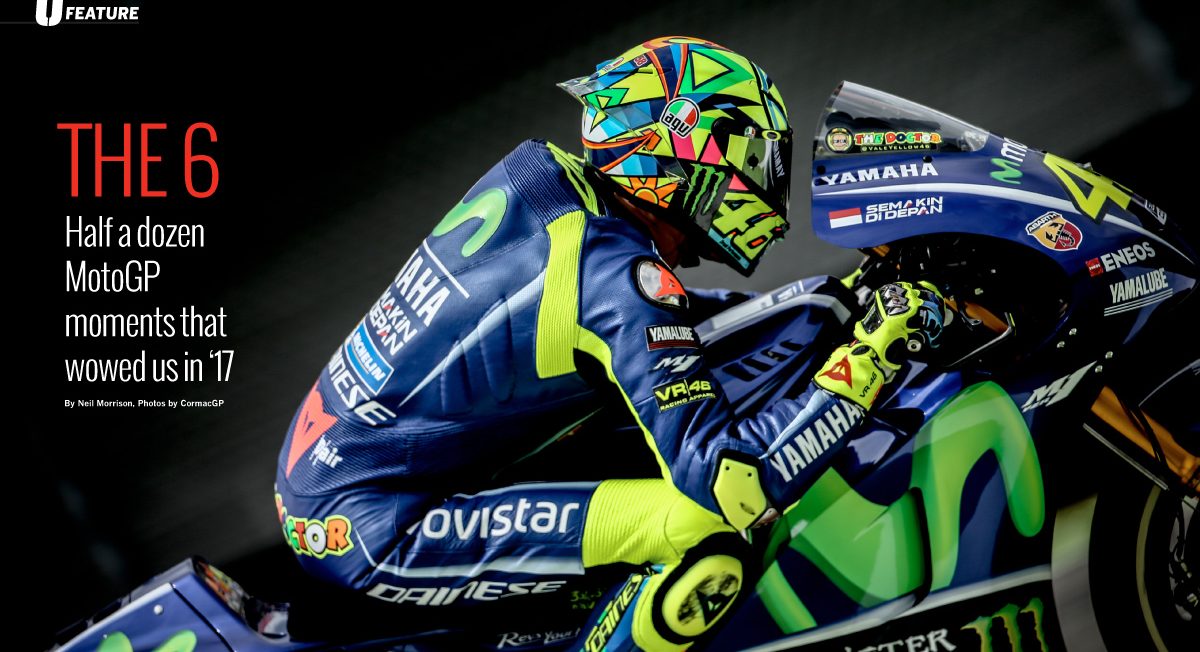 The moves that made a season
20th December 2017

How does a series go about following up a year that saw unprecedented variety, surprise and intrigue? Well, stick to the same formula and order more of the same. If the spectacle served up in 2016 was good, MotoGP ’17 was even better; five winners, racing of the highest calibre, depth right the way through the field, and, of course, a vintage title chase that went right to the wire in Valencia.

There was drama close to every step of the way. And it all started on the very first lap of the season opener. While the year will come to be remembered for the electrifying feats of Marc Marquez and the late career renaissance of Andrea Dovizioso, there was an array of subplots, stories and moments that stand out when recalling the events of the past nine months. Here, On Track Off Road selects six of the most memorable moments of an incident-packed 2017 season. 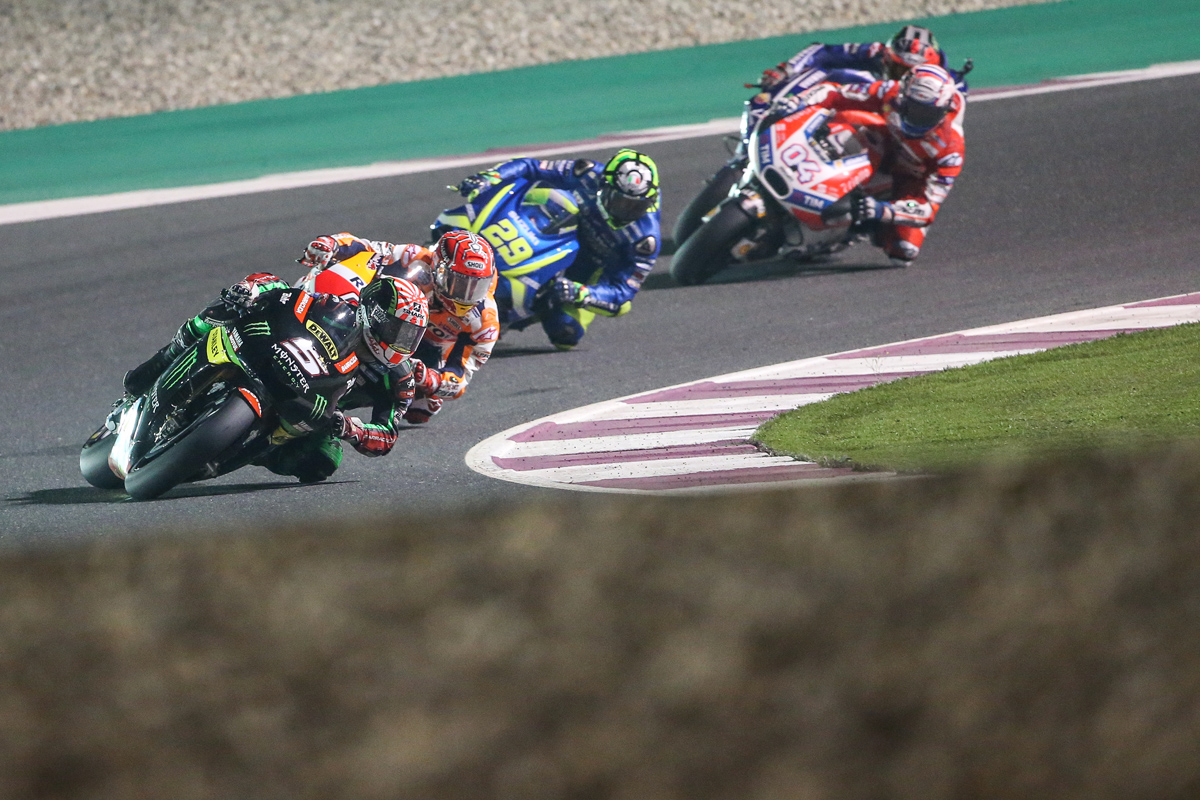 As far as curtain raisers go, this will take some beating. Of all those expected to challenge at the front of Qatar after a trying rain-affected weekend, class rookie Johann Zarco did not feature highly. True, a four-lap stint on Michelin’s soft rear tyre on Friday evening pointed to the potential within. But the Frenchman had spent his first pre-season aboard MotoGP machinery chasing the times of faster teammate (and fellow rookie) Jonas Folger. If history were to be used as a solid barometer, it would surely take him some time to get up to speed on a bike boasting more than 140bhp than the Moto2 machine that carried him to back-to-back championships in the intermediate class.

Not so, and this would certainly be the last time Zarco was underestimated in ‘17. That twelve minute spell at the front under the floodlights may have been just that – twelve minutes – but there was so much to appreciate: cutting across Scott Redding on the run to turn one; squirting under Marc Marquez and Maverick Viñales on the short run to two; darting under early leader Andrea Iannone with consummate ease into turn six; and then having the temerity to begin gapping the field behind. Zarco was not alone when feeling, as he later said, “a pain in the heart” as his M1 went skidding through the gravel two corners into lap six.

A rookie hadn’t hit the heights of leading their first MotoGP outing since that historic day at Suzuka in 1998 when Max Biaggi and Noriyuki Haga exchanged the lead before the former disappeared off and into the distance. As it transpired, Zarco would impress with a relentless consistency in the 17 races that followed, placing him firmly at the top of several factory’s shopping lists for 2019. It was his temperament here – remaining calm in the face of a 45-minute delay – that really stood out.

These twelve minutes set the tone for the events that followed. 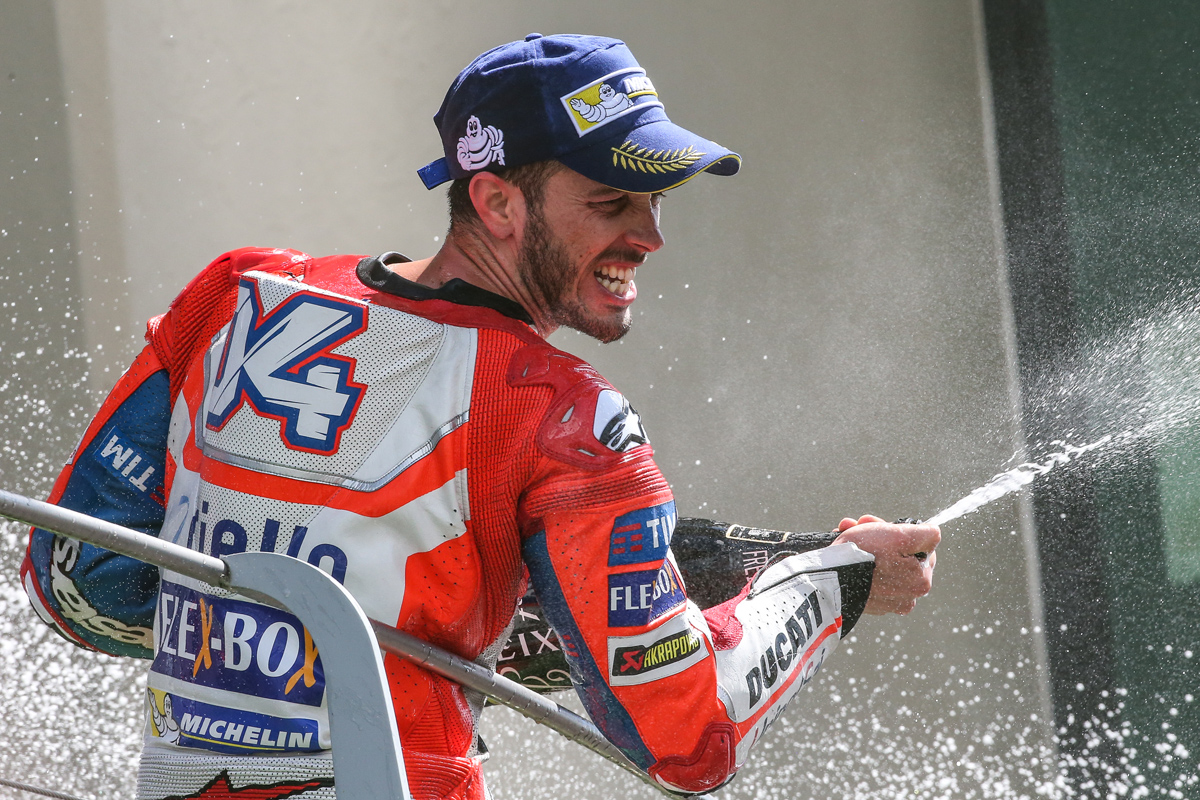 Anyone fortunate enough to spend a weekend at Mugello when the grand prix circus rolls into town will readily acknowledge sleep doesn’t come easy. The din that reverberates around those sweeping hills that shadow the circuit is as relentless on Thursday evening as it is on Sunday afternoon, a loud, boozy affair saturated with fuel-loving euphoria.

Thus seeing Andrea Dovizioso sporting a pair of darkened smudges under his eyes on the morning of a crucial home grand prix came as no big surprise. But his exhaustion on this occasion had a different source; a bout of food poisoning had kept the Italian awake throughout the Saturday night, necessitating several trips to the bathroom and forcing him to sit out morning warm-up in order to conserve energy.

Who could then have foreseen this first example of the Italian’s fully calculating and ruthless advance through a crammed leading pack to fend off pre-race favourite Viñales, surprise package Danilo Petrucci and Valentino Rossi? As Viñales became briefly muddled by Petrucci’s advances, Dovizioso stole critical ground and there was a real assurance as the Ducati man calmly resisted the Catalan’s late-race assault. Only his terrifying 210mph wobble over the crest that precedes turn one would have tested the resolve of those volatile bowels.

This place buzzes with energy and emotion on the dullest of afternoons. But Dovizioso and third-placed Petrucci’s tears on the podium only added to the occasion. The significance of Ducati’s first triumph here in eight years wasn’t lost on Ducati team boss Davide Tardozzi either. “We understood very well that Mugello and Barcelona changed our season. We found something after the Barcelona test. We understood that we have something in the end that can be good. It was confirmed in Mugello,” he said. “In Barcelona it was reconfirmed. From there we have always been competitive. In those two weeks we understood that we could be there. From there, Dovi found his balance.”

One of the premier class’ most unlikely title pushes in recent memory had begun. 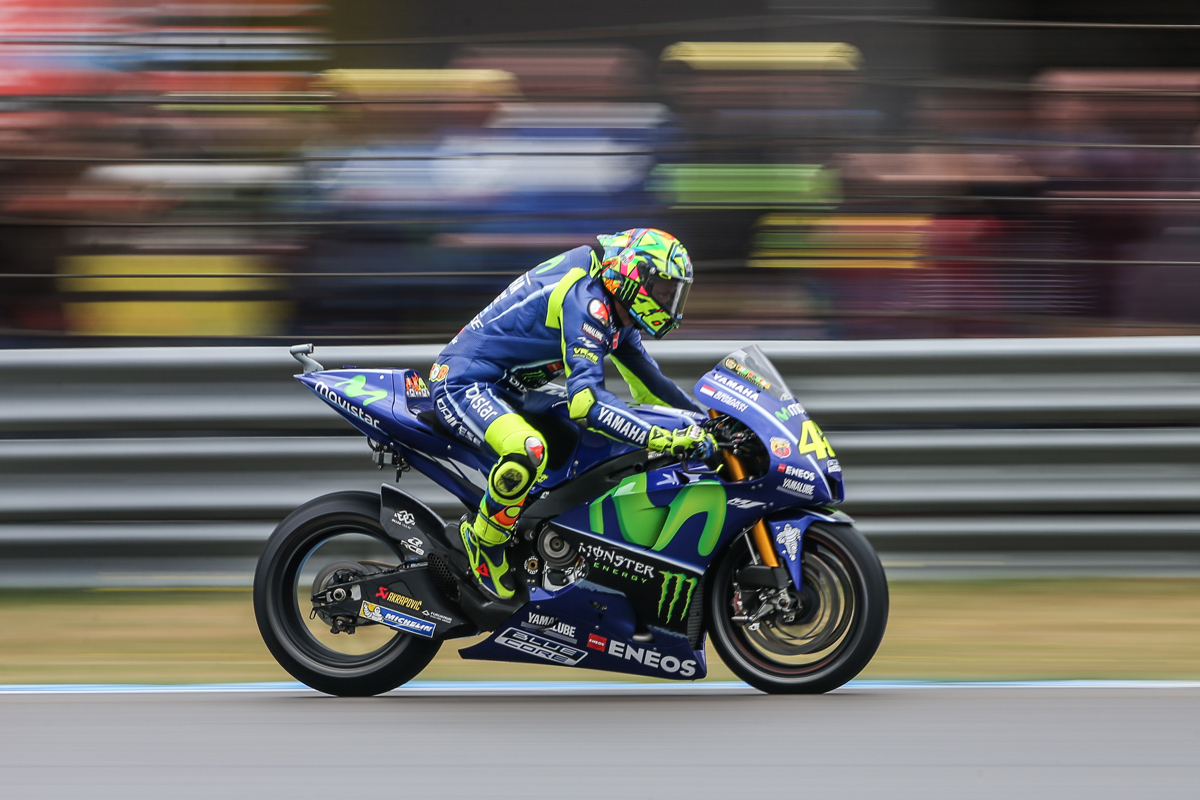 Any seasoned racer will stress the long-standing maxim ‘A win is a win’. But even Valentino Rossi, serial champion and arguably the greatest of all time, would place his latest success among his very best. His post-race reaction certainly suggested as much. “The reason I race is for that feeling that comes for six or seven hours after winning,” he said from a smile that stretched from ear-to-ear.

For this breathless encounter at an ever-darkening Assen didn’t just break a winning duck that stretched 13 months. It didn’t just take his GP wins tally to 115 – just seven shy of Giacomo Agostini. It laid bare the 38-year old’s hunger and desire which is as strong 22 years into his grand prix career as any other point. As rain peppered the track in those tension-filled closing laps, and two of the four-rider lead group backed off, Rossi sensed a chance.

It had been a four-way thriller before the rain arrived. Rossi, enjoying the turning advantages of an updated Yamaha chassis, battled pole sitter Zarco, Marc Marquez and Petrucci while Viñales, recovering from a lousy qualifying, succumbed to a hot headed approach through the chicane. Ultimately it came down to Rossi and Petrucci. Had it not been for a touring Alex Rins on the final lap, the Pramac Ducati man may not have been as far back as they approached the chicane. But it was difficult to imagine Rossi ever relenting with the prize within reach.

Also, hidden away in the aftermath: Third placed Marquez had witnessed the improvements of Yamaha’s new chassis firsthand. There was an air of resignation in his dealings with the Spanish media thereafter. “I don’t expect big changes before next year,” he said. “I hope to manage this situation in the best way possible and let’s see if next year can be a good season for us.” HRC sprung into action, announcing a two-day test at Brno over the summer break. Just observe how Marquez’s form went from there.

To see the rest of the article then click HERE