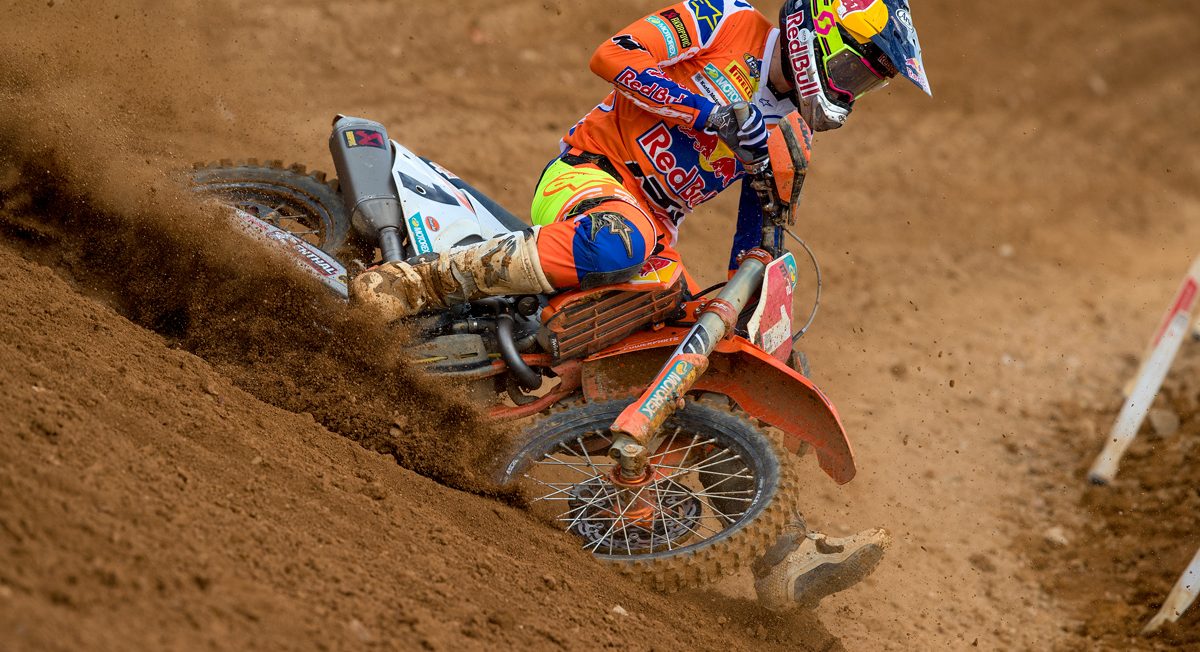 Jonass: “MXGP is not on my mind”

MX2 World Champion Pauls Jonass missed the podium for the third time in the last four rounds of the 2018 season at Lommel for the Grand Prix of Belgium and watched the gap to teammate and red plate holder Jorge Prado grow to 28 points.

Rumours have surrounded the 21 year old’s drop in form, especially after he dominated the first three fixtures of the series so comprehensively in Argentina, Holland and Spain. Some claim #1 is already thinking about a switch to the MXGP class in 2019, others believe he is undecided about which category to attempt as he is still eligible for two more terms on the KTM 250 SX-F while paddock gossip revolves around the absence of Marc de Reuver as a steadying influence as the Dutchman was part of Jonass’ crew when he won the MX2 title last year. 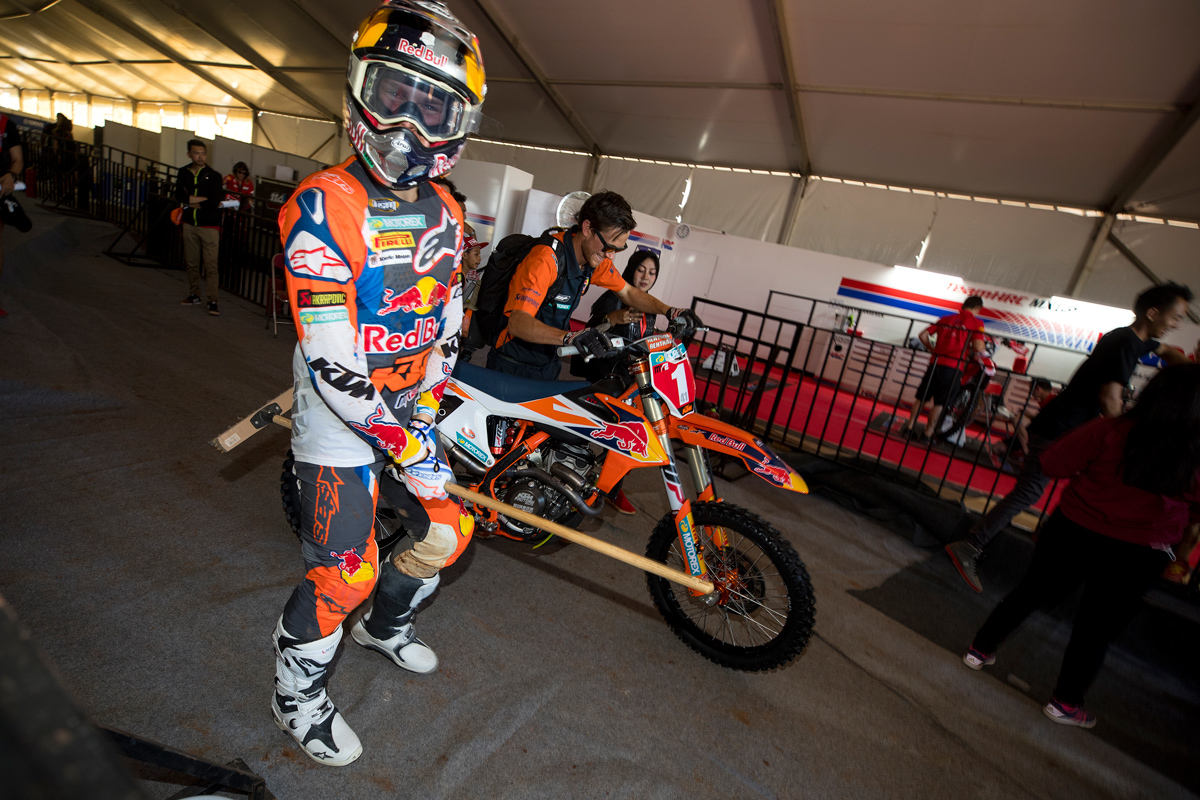 Jonass finished 5th at Lommel but was unfortunate to tangle with a backmarker while hunting eventual winner Prado in the first moto and was situated next to Brent Van Doninck when the Belgian wildly leapt over the stationary gate in the second race and his start subsequently suffered. Red Bull KTM Team Manager Dirk Gruebel believes his recovery and overall result showed signs that the champion is still firmly set on his title defence.

“He looked much better than [he did in] the last three races; we saw some fight when things were not going that well,” the German opined. “At points he was three-four seconds faster than Jorge at the front and that looks promising, even for his mindset and confidence. You cannot count him out. He lost points at Lommel but took some confidence as well.”

Jonass has paid heavily for some races errors and misjudgement this season. Prado has less moto wins and only holds three more overall GP victories but has totalled four more podium appearances. The rider himself says that motivation to get back-to-back crowns is not an issue. 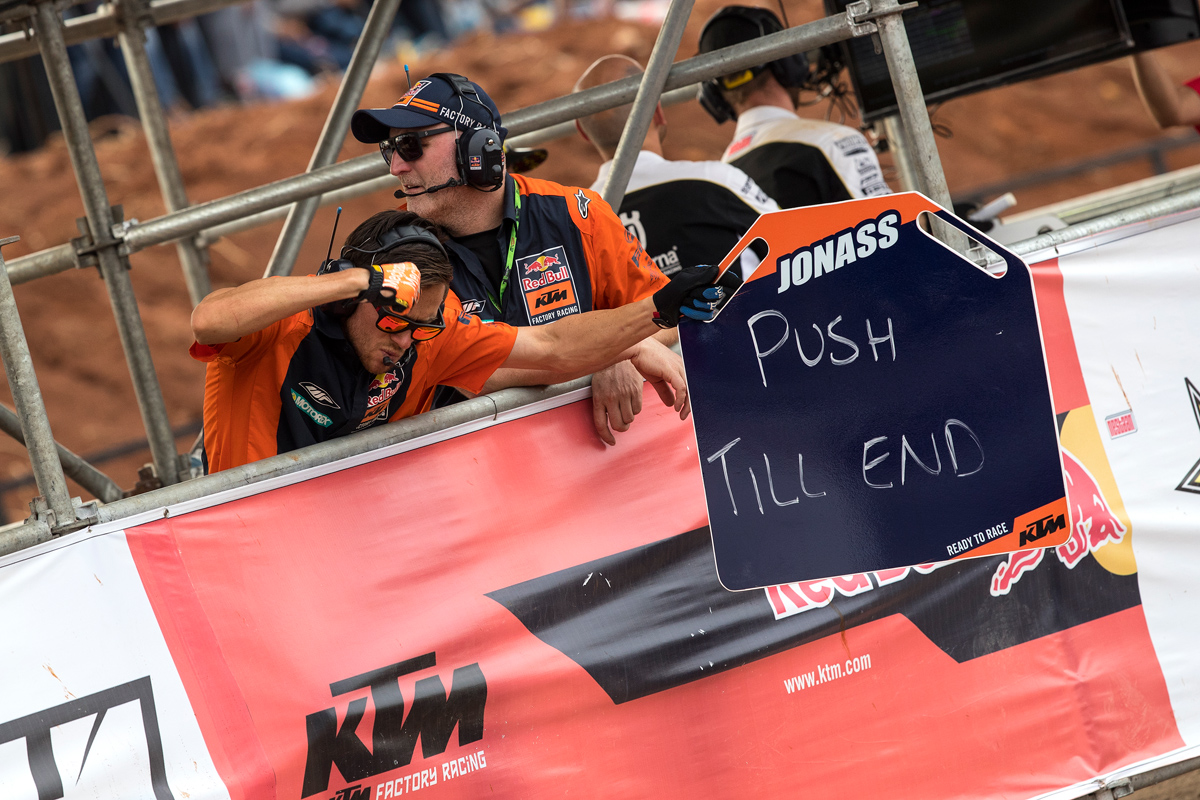 “I don’t think it is motivation; I am training hard but it’s just been some bad luck,” he said exclusively on Sunday night in Lommel. “Maybe I need to go to Church or do something! Things like the lapper, Van Doninck in the gate, the first turn crash in Indonesia…I think someone is really testing me but I will not give up there are still five races to go.”

Jonass also dismisses the looming prospect of MXGP. With Glenn Coldenhoff’s departure to Standing Construct KTM it is believed that the world champions will field three riders on the 450 SX-F (Cairoli, Herlings & Jonass) and just Prado in MX2. “That’s not on my mind, that’s b******t,” he asserted. “I’m focussed on this championship and then we will think of the 450. I have a great team behind me and also for next year so I don’t need to be worrying about that kind of stuff. I have one 450 already waiting in the workshop so when this is done then we’ll think about it.”