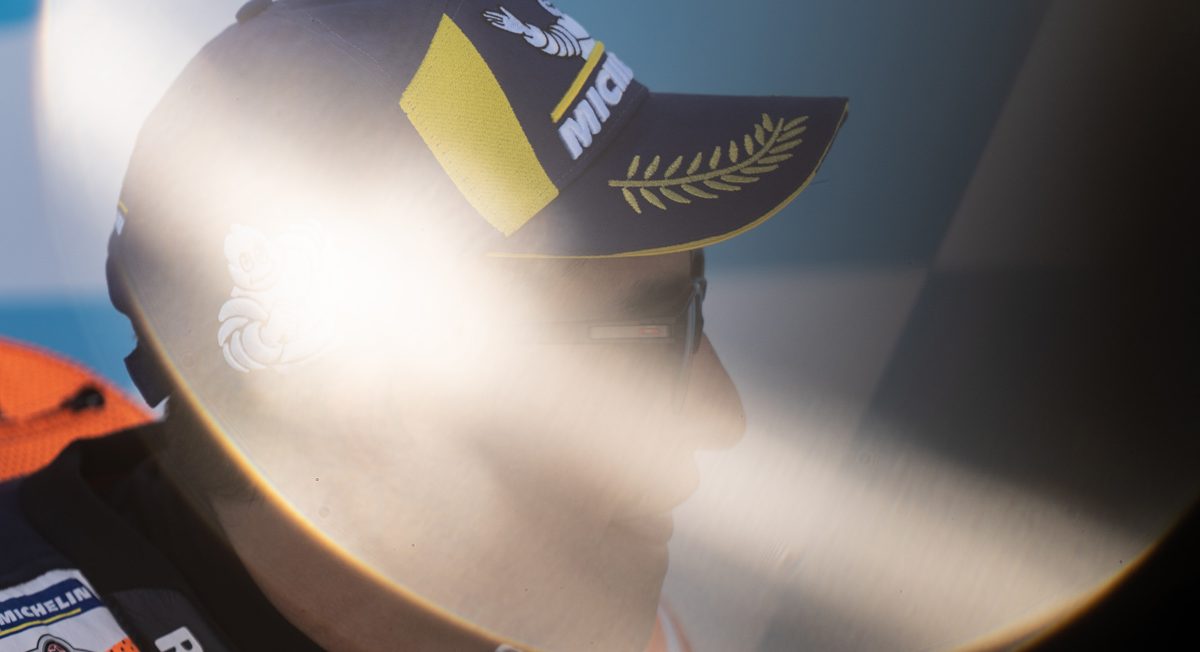 As Marc Marquez, still soaked in champagne and beaming from ear to ear in the wake of confirming his fifth premier class title, sat down to greet the media on Sunday, it was difficult to avoid comparisons with the World Champion’s press conference eleven months before.

At Valencia last November the 25-year old had spoken of the personal ordeal he underwent in the spring and early summer of that year. 2017 did not start well. Honda were still ironing out their new ‘Big Bang’ engine concept and Marquez had surpassed the limit Michelin’s original front tyre construction much too often. All this served as a backdrop to Maverick Viñales strolling to three of the first five races. And Honda’s main man wasn’t taking the possibility of surrendering his crown to a sworn childhood rival lightly.

A subsequent rushed hospital visit made him aware that too much stress was the cause. Should he wish to maintain those boyish good looks and full crop, a change was needed. He later reflected: “[It was] Then I realised I’m always smiling, always happy … but inside, we are humans and tension is there. We are nervous.” 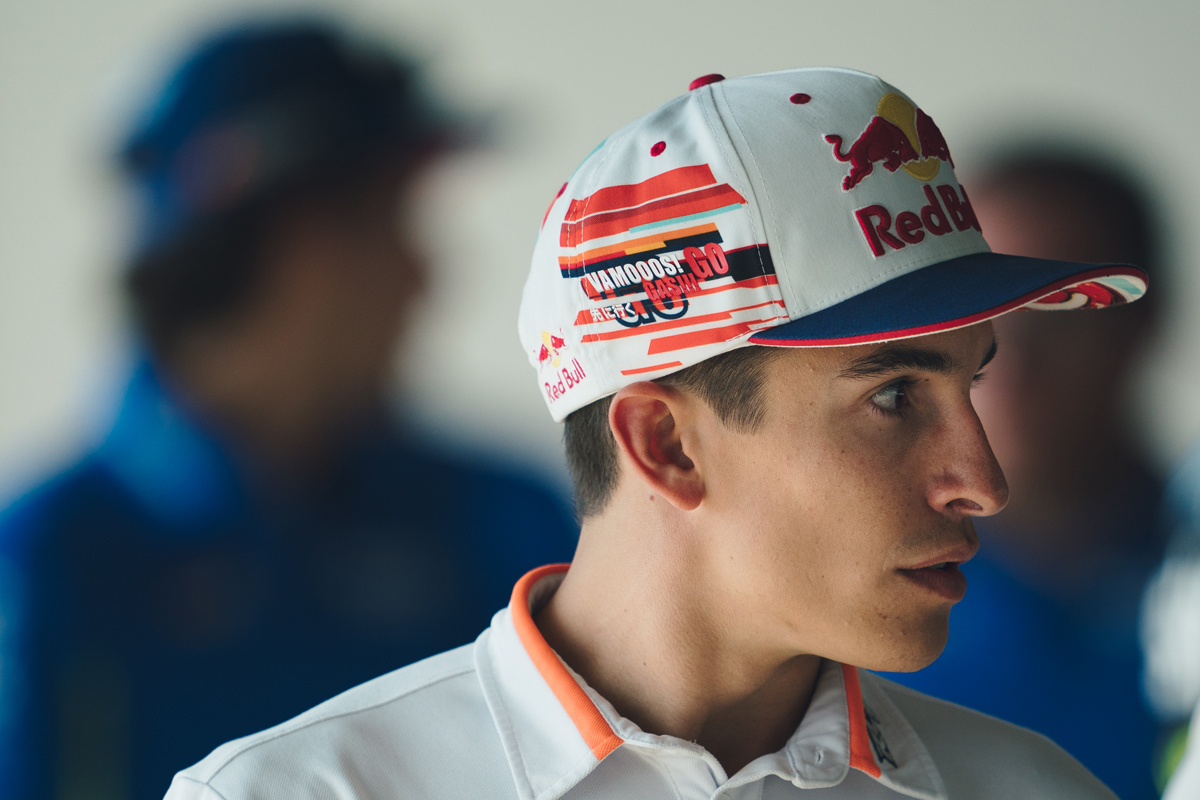 There have been few such causes for concern this year. “2017 was much more stressful,” he smiled Sunday past. And he was right. Along with the usual daring feats (think his recovery from a qualifying spill at Misano, one of the 18 he’s had this year), the outright speed (eight wins, five more podiums), and the continued competitive courage that saw his refusal to wilt in the shadow cast by the superior Ducatis from the summer of this year, 2018 will come to be remembered for the ease with which Marquez conquered all before him.

2014 aside, this has been his most controlled title win to date. From the very first round, a seventh world title has never looked in doubt. In truth, the writing was on the wall as early as last November when Repsol Honda’s fleet neglected to test at Jerez, so obvious was the potential of HRC’s refined 2018 engine when unveiled a week before at Valencia.

At his best this year, Marquez has been irresistible, simply riding away from them all when the fight was at its most intense. At Assen, for instance, he happily traded – and took – blows in a race for the ages. But there was always the suspicion he was holding back. Further triumphs in Austin, Jerez, France and Germany saw him barely break sweat. Staying with Dovizioso at Motegi before forcing a mistake from the Ducati rider was “something special,” to use the Italian’s words. Yes, he lost his cool in Argentina and earned a black flag three times over. But his feats during the race showed him to be operating on a level so high above the rest, it was close to embarrassing. 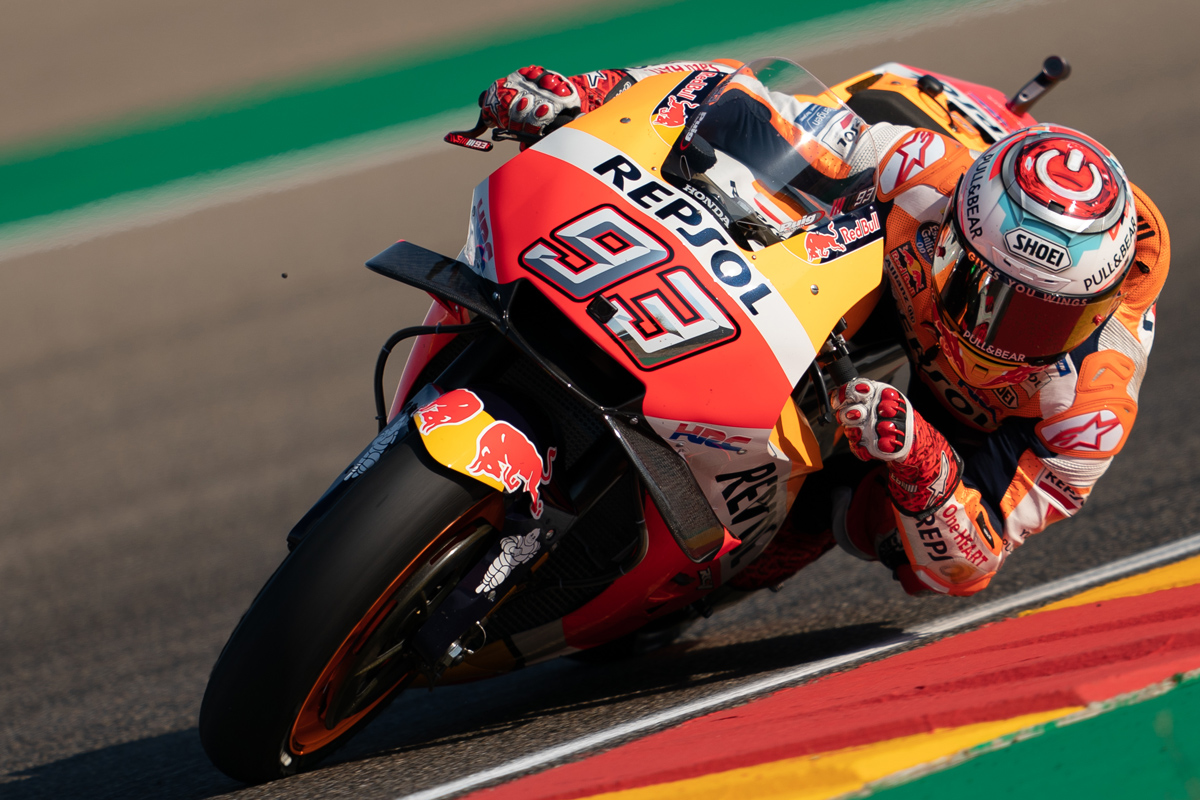 By his own admission, he’s more measured and mature than the past. His working pattern over a race weekend was established in Qatar: forget about fast times on Friday, and focus instead on race set-up. The outright speed could wait for Saturday. Yes, qualifying has not been as sharp as previous years (his ’18 pole rate stands at 26%, 12 percent lower than his previous worst in the top class), but he has never been as consistent, from lap-to-lap analysis and in results.

For a talent that shines so bright, it’s so often easy to overlook Marquez’s other traits. Intelligence is something he possesses in abundance and a willingness to study idols and rivals alike shows he feels there is more to come. Observing Rossi as a teenager taught Marquez the value of having stability around him, and a familiar team that would, to quote ex-squad member, “die for him.” And watching a rejuvenated Andrea Dovizioso form one of the most unexpected title charges in recent times showed the value of bringing it home, no matter the trouble. “It’s what I learned [from] Dovi last year. He was really good to manage [all] the situations,” he said. Ultimately that prevented the ever-looming Ducati threat ever getting within reach.

“When I check the [championship table] and I see 20, 25, 25, 20, 25, 20, 25… this was something that we worked really hard on [during] pre-season, to achieve this consistency,” he said on Sunday. “This was the key.” Mugello and Silverstone were the only two tracks of 2019 where Marquez hasn’t, at the very least, been in podium contention. Contrast that with Dovizioso’s inconsistency, Lorenzo’s career highs and lows, Pedrosa’s sorry deterioration and Yamaha’s frustrating fluctuations. Through one of MotoGP’s most varied and unpredictable periods, Marquez has remained the only constant.

How telling it was to watch his smiley, jovial nature disperse in the press conference that followed the Czech Grand Prix. There was little of his usual engagement when taking questions. Instead his answers were clipped and curt. To see him then was to watch a reigning champion grappling with defeat. In racing terms, that was as bad as it got all year – and he had still finished third.

Two key moments from the year stand out: the first, at Montmeló, effectively put an end to Dovizioso’s ’18 challenge for good. Knowing Lorenzo could not be stopped that weekend Marquez made it his mission to stymie the Majorcan’s team-mate, and drew out a mistake. Another came at Misano. On this occasion the Ducati riders switched. The Repsol Honda would not settle for second and Marquez’s harrying of Lorenzo in second place forced another fall, and conclusively ended his challenge. Taking on both Ducatis at once, he reasoned, was impossible. Working on – and beating – one, while the other, less dangerous title challenger was ahead came up trumps. Tactics executed with the precision of a surgeon. 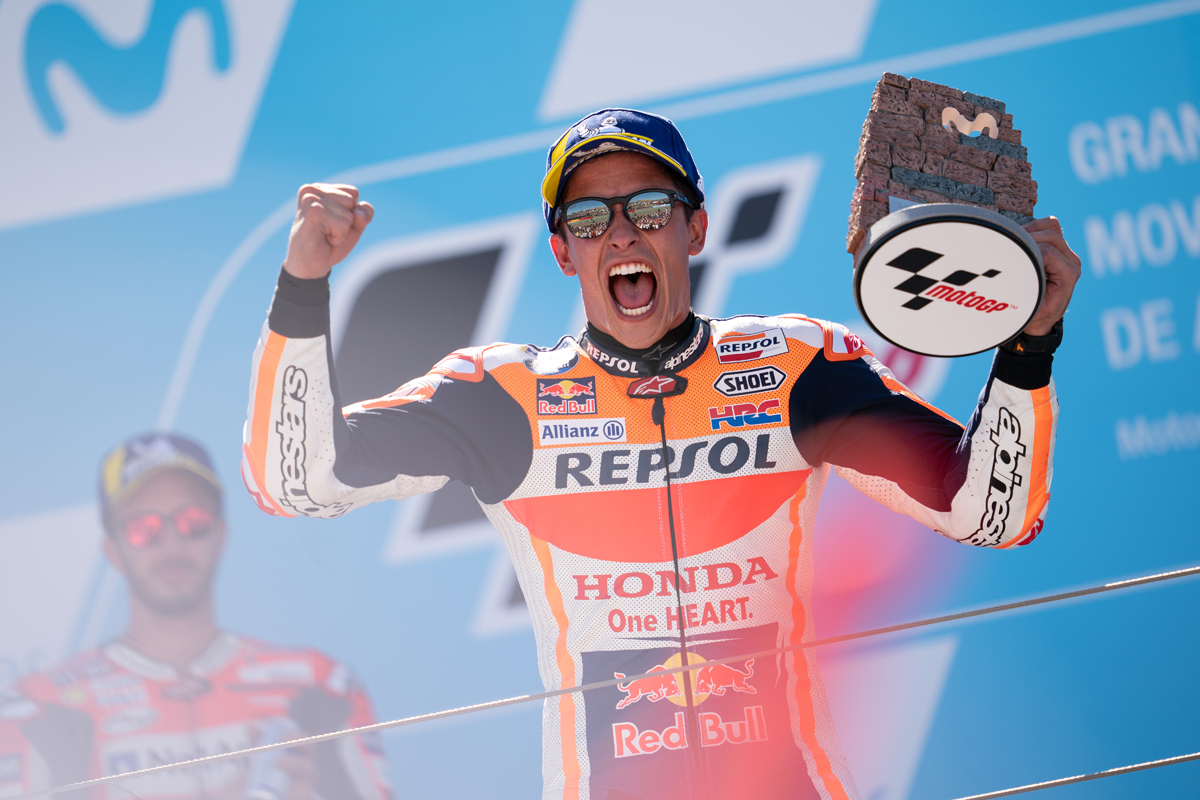 Yes, his bike has helped. Honda’s much-improved 2018 motor and more sorted electronics package has eased the strain on its riders. But the next best Honda sits 148 points back in the championship. What’s more, Marquez continues to do things with his RC213V that no other HRC-mounted rider (or any other brand, for that matter) can dream of doing, grappling, fighting and bringing a wayward front tyre back from a seemingly hopeless abyss of pain and tangled carbon fibre.

On paper, such feats veer toward fantasy. Had you not witnessed a front-end save at Montmeló’s final turn, taken in fourth gear, for example, it’d be too far-fetched to believe. Sure, the implications of crashing nowadays are nowhere near as lethal as they were in Duke’s day. Or in Roberts Senior’s. Or even in Doohan’s for that matter. But has any rider in history left the jaws of so many observers on the floor with such regularity? Even when the others are dazzling, Marquez finds a way to switch attentions back to him.

This latest triumph takes him above Duke, Hailwood, Surtees and Lawson in the premier class championships list. Now Agostini and Rossi remain ahead. Only right, then, that he has drawn comparisons to not only the greats of our sport but those in other disciplines. This period will come to be referred to as the ‘Marquez era’ of premier class racing, much as the early 2000s were Federer’s in tennis, or the 1980s Maradona’s in football. And the worrying thing for Dovizioso, Lorenzo and the rest is the end still feels a long way off.