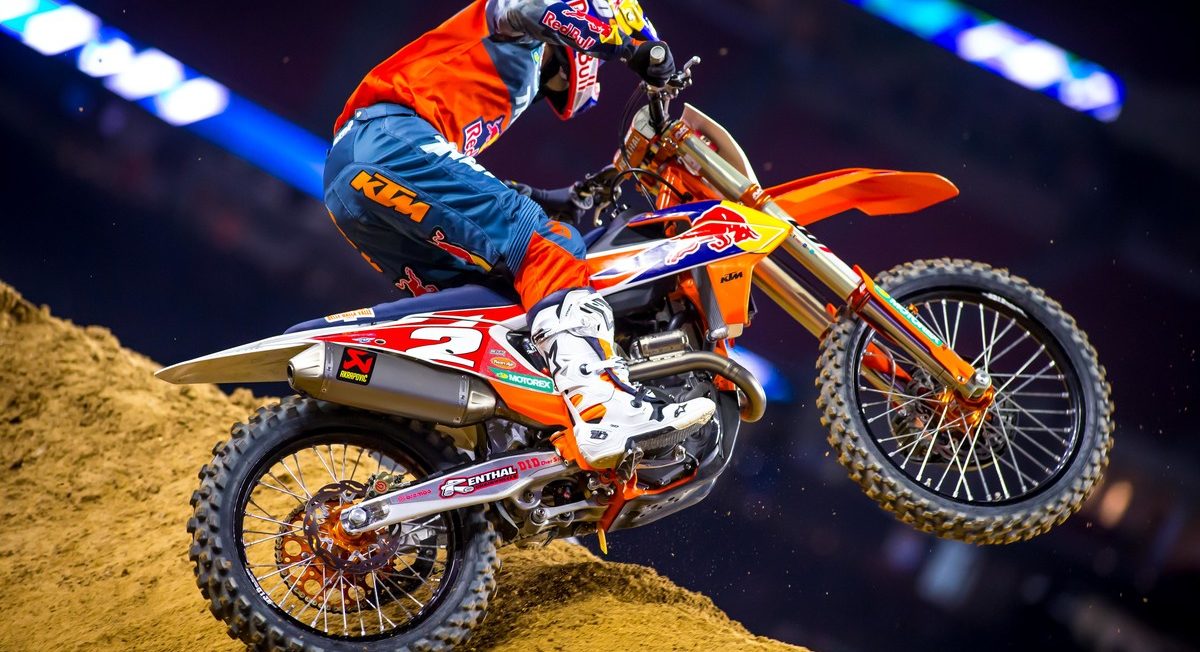 Well it took a little while but we’ve got some heated action in the 2019 Monster Energy Supercross series. We wondered when the Red Bull KTM teammates of Cooper Webb and Marvin Musquin would come together and force the issue. In Houston this past weekend at the third and final Triple Crown, we finally saw it.

It’s nothing new in supercross racing, as the series winds down and the pressure increases, things seem to happen. The fact that Webb, the underdog series leader, and Musquin are the two protagonists and training partners down there at the Aldon Baker facility makes it even juicer.

Webb asked questions of Marvin in one of the main events and it ended up with Marv on the ground. Afterwards Webb was apologetic in the press conference and admitted that his emotions got the best of him (most likely because of Musquin’s attempt earlier to squeeze underneath him) and that will make for an interesting week down there in Florida no doubt.

Webb went on to win the overall and with Musquin getting second, the points lead was stretched to 17 for Webb. Houston might be a pivotal moment in the series, especially when you consider that Musquin was penalized seven the previous week for jumping on the red cross flag.

So here we are, hysteria will rule the next few days as the two teammates begin to pull away from Honda’s Ken Roczen and Monster Energy Kawasaki’s Eli Tomac with just four rounds to go. This is supercross racing and not tiddly-winks with millions of dollars and a legacy at stake so pardon me if a couple of riders get their elbows up a bit in trying to make something happen out there.

Switch the colors of the bikes and make it round four and does anyone care about what either rider did? I don’t want to be one of those guys that walked uphill to school both ways but imagine showing any of the older racers those passes and then mention the panic and anger that’s going on with them? There’s not much room out there on a SX track and you gotta make stuff happen without t-boning someone or pointing your front wheel to the exit of a corner.

That’s how I feel but I’m sure that’s not how either guy feels.

Clearly tension will be high at the Red Bull KTM truck, both riders going for their first 450SX title of any kind. Both riders will be under the microscope in every practice and race from here-on-out and we the media will have plenty to talk about.

If you’re Marvin Musquin you feel like you owe your teammate one for the aggressive riding, if you’re Webb you feel like all your moves were somewhat justified by Marv’s aggressive actions early in the race and I get both sides. What Aldon Baker and team manager Ian Harrison need to do is pull both guys in and explain that anything that’s over the line won’t be tolerated but yes, keep up the aggressive racing because that’s what supercross is.

It’s most important for the KTM brand to bring this thing home and it looks like they will. They just can’t have both riders laying on the ground from trying to kill each other.

Emotions are high, things are tense so let’s sit back and watch these last four rounds; they should be great.