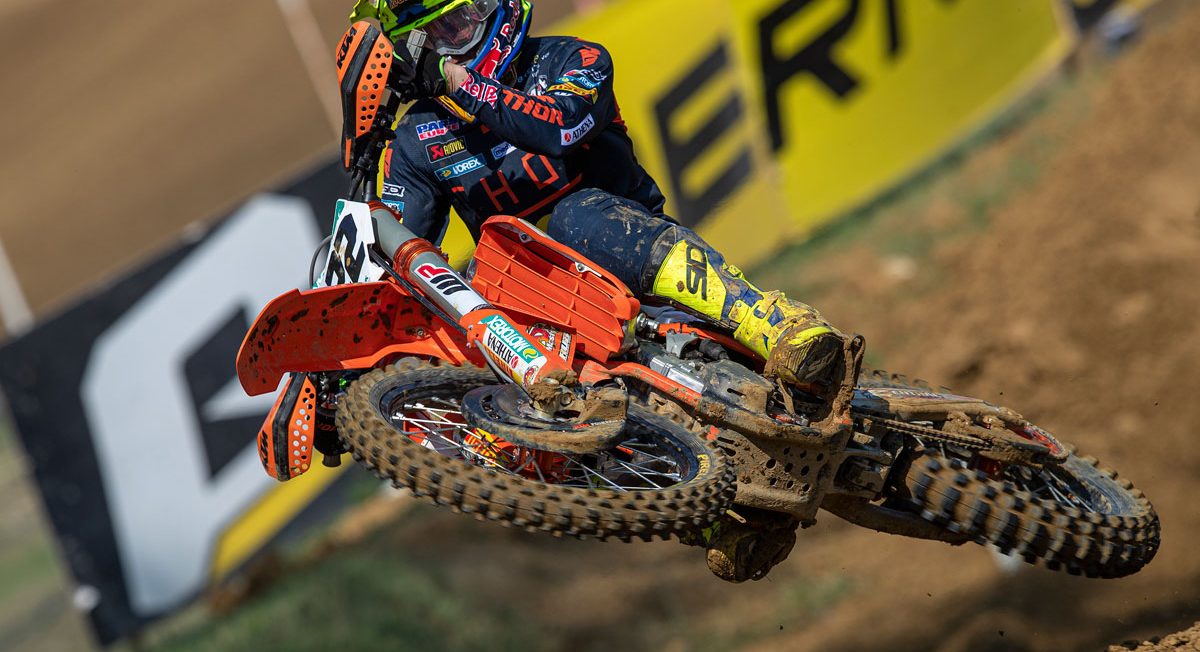 Staying in the game

MXGP is being fronted by a soon-to-be 35-year old who has won six of the last eleven premier class titles. Even in these jumbled times caused by a pandemic it’s reassuring to know that some things don’t veer too much from the norm.

In the 200th issue of OTOR this year I cast Tony Cairoli as #1 of my top five greatest motocrossers. He boasts unparalleled experience, competitiveness and still a high level of adaptable skill. As an example, see how he repeatedly stated that the Monte Coralli course in Faenza was not one of his favourite tracks yet he only dipped out of the top three (with a 4th) once from six motos. Protecting his weakened right knee he was 3.8 seconds off the pace in Timed Practice for the third and final GP in Italy last weekend and took to the gate in 18th yet he did not drop lower than 4th throughout all thirty-four laps of both races: his 2-2 meaning a second victory this season, a 91st of his career, a 169th podium (the all-time record holder by 3 from Stefan Everts) and the treasured red plate for the first time since May 2019 and the Grand Prix of France. As an extra sweetener he achieved it all last Sunday in front of a smattering of local fans permitted access to Monte Coralli.

Cairoli has scaled to the height of the premier class and stood two steps higher on the Grand Prix Emilia Romagna podium than teammate and former protégé Jorge Prado, sixteen years his junior. With four trophies from eight in 2020 his trademark consistency is proving to be a very valuable currency in this COVID-19 crush of dates.

He might already be in the pantheon of legends but there was some fair debate whether Cairoli would be able to post the results to be able to front the MXGP class again after the most serious injury of his career in the summer of 2019. He was complaining of a tweaked knee at the first Grand Prix of the season in the UK and is one of five different riders (three for the first time ever) to win just one moto win from the sixteen so far in 2020. To-date he has only led 18 laps this year. The challenge from Jeffrey Herlings proved too much in 2018 and Cairoli was under pressure from a fit-and-firing Tim Gajser in 2019 even before he trashed his right shoulder. With riders like Prado, a maturing Jeremy Seewer, a vibrant Arminas Jasikonis, a if-fit-then-a-hit Glenn Coldenhoff and a resilient Romain Febvre, Cairoli was seen to be the vanguard of the ‘old guard’; athletes with immense pedigree but also a lot of mileage such as Gautier Paulin, Clement Desalle, Jeremy Van Horebeek and Shaun Simpson.

Those shackles of opinion are become looser.

As in 2019 the current absence of Herlings is pervasive. It could be compared to the Marc Marquez hole in MotoGP where the benchmark has been removed. Herlings had a 60-point advantage and 4 wins from 7, not to mention the only 1-1 of 2020 before his Free Practice mishap in Italy.

Like in 2015 (when Cairoli fractured his arm in qualification for his home round and subsequently threw open the formbook for others), 2017 (Gasjer tumbling several times to eject himself from the KTM dispute) and 2019 (Herlings pushing himself out of a title defence with a pre-season smash) injury has returned to dent the heavyweight of the class.

Herlings’ case differs from Marquez in that this is a sadly familiar story for the Dutchman. The Honda road racing star is facing an unprecedented break and convalescence from his sport while the Red Bull KTM icon is being frustratingly regular in his bounce from dominance to despair. In 2016 he was superlative in MX2, but then misjudged the challenge ahead in MXGP and broke his right hand starting 2017. In 2018 he produced one of the most remarkable seasons in the history of the sport but then broke his leg/ankle twice during the first half of 2019. Championship pace setting form and a calmer approach to 2020 was working nicely until the unlucky landing and neck and head impact that will force him to the sidelines for at least five rounds. ‘Unlucky’ is a suitable word, but by Herlings’ standard the consequences of his vicious landing last Wednesday morning is relatively tame compared to the broken femur, dislocated hip, broken legs and more ailments than have struck his previous excursions.

So, if the condensed nature of 2020 and the limited range of tracks already forges this championship as ‘alternative’, then does the disappearance of Herlings from the game also somehow cheapen the achievement for the eventual winner? Nonsense. Assuming that MXGP can fully complete some semblance of a race roster then the same parameters apply as if it was a continent hopping 20-round contest. Yes, there are only two hard-pack Italian tracks, British earth, four sandy courses and an unseen Spanish layout on the slate, meaning that the challenge is limited compared to the ruts in Portugal, the heat in Indonesia, the stones of Sweden and so on, but those conditions still have to faced and bettered. MXGP has 8 rounds in the bank and is counting on at least another ten, discounting the trip to Argentina which somehow survives on the schedule.

Herlings was building a solid case for a second MXGP crown but his level of performance was not in the same realm as 2018. In fact, Gajser had equalled his haul of chequered flags before his crash. He had prospered to the tune of those 60 points because he’d fulfilled an objective of consistency that Cairoli, Jasikonis, Coldenhoff, Gajser, Seewer, Prado and Febvre could not match. Now the onus falls onto a group of six other riders all split by just 52 points. All of the aforementioned names have shown their capacity for victory. Coldenhoff needs to rediscover his confidence from the first Latvian Grand Prix, Seewer needs that first breakthrough, Prado has to improve his race conditioning, Febvre has to cut down the mistakes and improve his starts (as does Jasikonis) and Gasjer has to meld with the new Honda CRF. But it’s a busy bag.

Herlings situation also highlights the thinner tightrope that Grand Prix riders face in 2020. All too often we hear racers adding weight to a result with a claim of “I’m happy to leave here safe and healthy”. The worry to preserve fitness in a congested calendar can almost match the preoccupation to snare a couple more championship points. This year that concern is heightened with at least three triple headers: there is no room for serious mistakes and a significant injury ruins what is already a salvage operation in 2020. In this respect I can only feel sympathy for a rider like Thomas Kjer Olsen. It’s a shame the Dane is only coming back to his normal level of form eight rounds into the campaign. He’ll do very well to make it a fourth (and final) MX2 year with a top-three finish.

The Russian roulette wheel could spin again and the odds are that it will. Herlings will likely return to MXGP and have a say on the results, especially if he makes it for Lommel, but there will be somebody else crafting the bigger picture. Can Cairoli adjust the easel and finish another masterpiece?