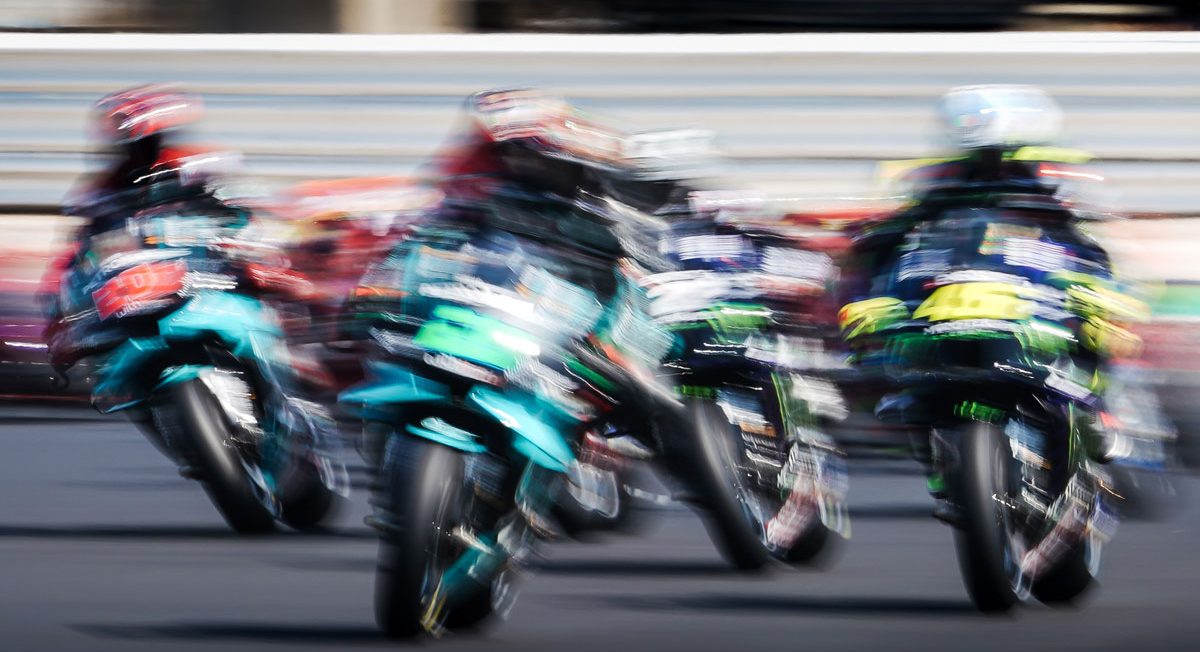 Of all the riders on the current MotoGP grid, Franco Morbidelli is perhaps least like your average motorcycle racer. Ever-smiling, laid back and rarely flustered in front of the camera, he strikes you as a man who would be more at home carrying a surfboard on a local beach rather than producing quite extraordinary competitive feats in motorcycle racing’s most intense snake pit.

But his performance last Sunday at Misano was just that: quite extraordinary. Leading from turn one, Morbidelli was the definition of calm; building up a lead of two seconds, providing him the time to “think about many things” in the race’s final third. In what was the fourth closest top ten in MotoGP history (12s covering first to tenth), his 2.2s winning margin was a rout, in relative terms.

In Marc Marquez’s absence, the pups in MotoGP have grown fangs, all keen on claiming the biggest prize come November. Just like Fabio Quartararo, Brad Binder, Miguel Oliveira, Francesco Bagnaia and Joan Mir, Morbidelli has now established himself as a true premier class force in 2020.

Yet unlike those other names, the 25-year old didn’t mark himself as such in his first two years in MotoGP. He managed just two top tens in his debut season aboard an admittedly uncompetitive Honda in 2018 but was regularly reduced to a whipping boy by Quartararo, his younger team-mate, throughout 2019. “He got smoked,” was how team boss Wilco Zeelenberg put it.

Despite the stewardship of crew chief Ramon Forcada, who guided Jorge Lorenzo to all three of his premier class titles, Morbidelli repeatedly failed to understand why he could not manage the rear tyre to the end of the race. Last year’s best result of fifth (scored on four occasions) paled in comparison to Quartararo’s six poles and seven podiums. Not a weekend went by from Jerez when the question wasn’t brought up. “Why is Fabio so much faster than you?” On each occasion I observed Franco not only handled this exchange with remarkable patience, but tremendous grace.

But how he has bounced back. Leaner, fitter and embracing the silky-smooth riding style that his Yamaha M1 demands in his second season on the bike, Morbidelli – like six other names – now appears to have everything in place to contest this year’s championship. Bike? Tick. Team? Tick. Temperament? On Sunday’s evidence, an emphatic tick.

For this was a remarkable recovery from the Austrian Grand Prix, when a 170mph collision had left Morbidelli battered, swollen and openly shaken for the Styrian bout. That’s twice this year he has managed to pick himself up after crushing disappointment (he responded to heartbreak of retiring from third at the Andalusian Grand Prix by scoring a podium at Brno). But, as his 25 years on this planet have shown, Franco’s demeanour belies an abundance of steel.

Now he’s the one putting pressure on Quartararo, rather than the other way around. And the key to this reversal has been dedication. The son of Italian ex-racer Livio and Brazilian mother Cristina, Morbidelli admitted back in the Czech Republic that it has taken some effort to curb the Latin part of his temperament. “I know I look like a serious guy but I clearly do have a Brazilian side, when I’m at home especially. I have to control that sometimes. I needed to control that this winter. I said to myself, ‘less party, more training.’ That’s what I did.”

Team boss Wilco Zeelenberg concurs. “At first he was the Moto2 champion coming from a bad season at Honda. Clearly, he felt he was capable of doing what he is now but he couldn’t in the beginning. That sometimes is hard, when you expect a lot and it’s not coming. That’s what I expected from him: it’s not how you fall. It’s how you get up again. I’m impressed by him because last year he got smoked by Fabio many times and he never moaned. He only works hard on himself. As a sportsman that’s the maximum you can give.

“At the end of last year, he had already changed his style and his rhythm in the races was better. He understood last year what he needed to do to ride the Yamaha better. Then in the winter he basically continued. He prepared himself better because he trained harder. But especially mentally, he knew he had to improve his smoothness with the Yamaha – to not push too hard in braking. Also, to get the base setting right and focus on his riding.”

Last weekend Morbidelli won both on and off the track. Most one-off liveries are merely designed to look cool. But his weekend helmet design showed great taste (quoting Spike Lee’s seminal 1989 film Do The Right Thing) and carried a simple, unifying message. Just how he articulated his stand against racism in his third language was a credit to him. “We are trying to put up a show for the audience and we are trying to make the audience feel good,” he said on Saturday. “So I wanted to treat this topic with some lightness, not being fully straight or not being heavy.” To do so in a paddock that has largely opted out of commenting on what sadly remains such a prevalent issue was another example of his strength of character.

Perhaps Morbidelli’s backstory goes some way to explaining his grounded manner. For his current status was nothing but a pipe dream when just ten years old. Having grown up in Rome, an area with “less passion, less tracks, less sponsors, less people prepared and ready to help you” than Italy’s eastern coastline, father Livio, himself an ex-racer, decided to up sticks in order to pursue his son’s dreams.

“My father was friends with Valentino’s father so they knew each other,” Morbidelli told me in 2017. “My father used to race and when he was racing, he was doing so with a team from Pesaro. When we decided that motorcycles were the sport that I wanted to do for a living, my father had the experience of the Riviera area. He knew that was the best area in Italy where the rider can grow up and express himself.

“So, he decided to move there and get in contact with the people that were following him when he was a racer, to give me the same environment. Plus Vale was there. My father asked his father if I could train with him at his track. Then we started training together and here we are!”

In his younger years he was a natural on minibikes, racing around the go-kart tracks that dot the Italian Riviera. But a lack of funds meant a teenage Franco couldn’t afford the route favoured by the majority of today’s grand prix stars (the CEV or Red Bull Rookies followed by Moto3). Instead he went production racing, shining in the now defunct European Superstock 600cc championship, a series he won in 2013. That was the same year his father tragically committed suicide. Franco is familiar with overcoming adversity, both professionally and personally.

In 2014 he was picked up by the fledgling VR46 Academy, and a seat in Moto2 was found. Having the chance to train alongside Rossi – like “a big uncle” more than a friend – has been vital in his rise from grand prix rookie to World Champion in the intermediate class to MotoGP’s fifth different race winner in six races all in the space of seven years.

“The key has been that the greatest rider ever and the greatest Italian rider decided to make an environment to make youngsters grow up,” he said of the benefits of the VR46 Academy on Sunday. “Basically, Valentino is a champion. He has many facilities to live in, to work in, in order to be a good rider, in order to be a good professional and a good athlete. He just basically has put his know-how and his facilities at our service. I like to call him a big uncle because he’s a friend but I show him and I bring him a bigger respect than what I have for Pecco, for example. I respect Pecco but maybe Vale in a different way.”

Never one to scream, shout of punch the wall in times of crisis, Morbidelli used to give the impression he could be too laid back for his own good. Consider, for example, how he dealt with the disappointment of crashing out at his home GP three years ago. “I just went home, got on the sofa, and started watching Sky, eating chocolate, like a guy that splits up with his girlfriend,” he later told me.

And it’s that inner steel and serious competitive streak that has carried him this far. Last week began amid wild speculation slating Rossi’s imminent surprise retirement. While ultimately unfounded, Morbidelli has shown, along with Bagnaia, that the future of Italian motorcycle racing is in very safe hands when the nine-time champ does eventually decide to hang his leathers up.