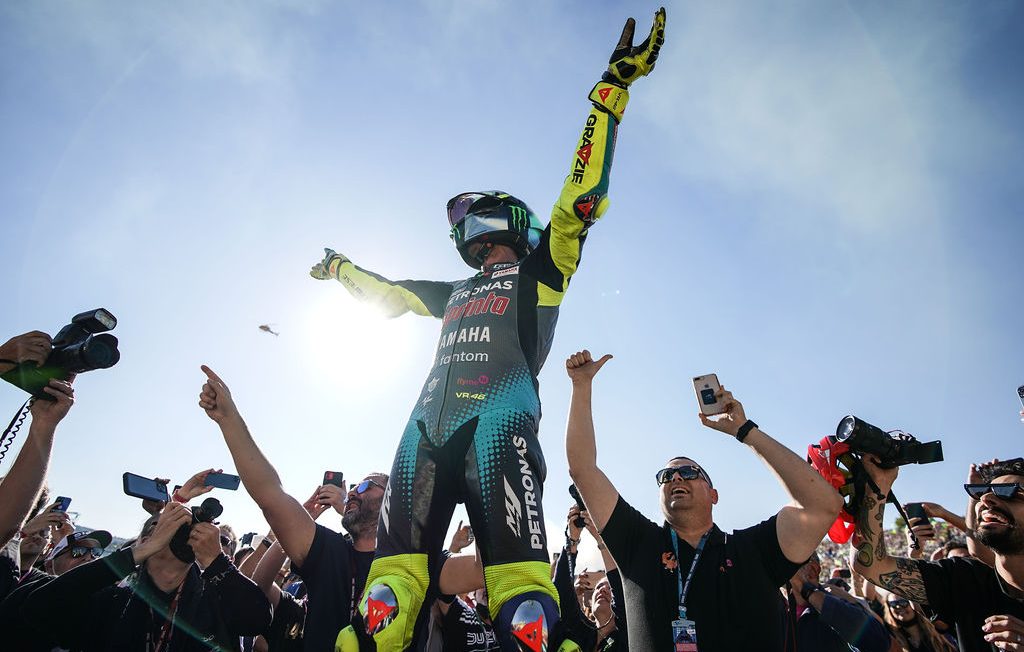 Somewhere between the career highlights reels, the interviews in which the Italian rhymed off the greatest moments and regrets from his career again and again (did you know Rossi feels he deserved to win a tenth title, by chance?), and the four-story mural that bedecked the restaurant building at the Ricardo Tormo Circuit, there was a chance it was all getting a bit too much.

Don’t get me wrong. If there was a career worth celebrating, it was this one, a 26-year stint racing at world championship level that brought with it a record number of grand prix starts (432 – 100 more than the next highest), premier class wins (89 – 21 than the next highest) and MotoGP podiums (199 – 85 more than the next highest). Oh, and then there was the small matter of growing the sport beyond recognition. Or, as he put it back in August, “Entertaining a lot of people on Sunday afternoon. For one or two hours they didn’t think about anything, just enjoying my races.”

This deserved a celebration alright. But perhaps we had grown so used to Rossi’s recent malaise that it felt the fanfare would distract the Italian from the job at hand. You know, the racing part, the thing on which he built his name. For a rider of this standing, such celebration would feel slightly hollow if he came home 13th, as he did the previous weekend, or even worse: 15th, like he did at COTA, 17th, like the first race at Misano or 19th like Aragon.

So, it was something of a relief to see Rossi attacking his final race in a manner befitting the occasion. He used the tow of protégé Francesco Bagnaia to good effect on Saturday, securing a spot in Q2 for only the sixth time this year. And from his best start of this season, he could be seen riding around the outside of Fabio Quartararo – yes, the recently crowned world champion – at the first turn. Right there, you could see he didn’t intend to let this pass him by.

Ultimately, he dropped back to tenth and couldn’t quite make an impression on Enea Bastianini, Aleix Espargaro and those just ahead. But Rossi really attacked this to the end. There was no easing up in the final laps with a tear in his eye. His lap times varied by 0.6s over 26 laps – tremendous consistency at a tight track on which mistakes are inviting. He finished 13.4s off race winner Bagnaia, which, on average, works out as 0.49s slower per lap than the world’s current fastest rider. And his race time was 13.2s faster than his effort here last year (and 14.5s quicker than ’19). All at a track around which he last won 17 years ago on what was a difficult weekend for Yamaha.

For one, Franco Morbidelli was impressed with this showing. “I found myself right behind him,” said the Italian, a place back in eleventh. “(I thought) ‘Let’s try to push and maybe overtake him’. But he was so fast and so unattackable that I needed to stay the whole race behind. He was riding was riding unbelievably well (and) increased the speed in the last laps.”

There were changes to the bike after FP2 which gave him great feel. But more than anything, you feel Rossi’s fighting instincts were the biggest factor here. You don’t amass nine world titles, 115 grand prix victories and compete in 44.4% of the grand prix events that ever took place by simply accepting the inevitable. Listening to his final post-race debrief, it was clear he couldn’t stand the thought of going out on a bum note. As he noted, “the last weekend of my career… you always think about this moment for a long time.”

There was a pep talk with his team after the recent muted weekend on the Algarve. “After Portugal we speak together and I said, ‘Fuck, in Valencia we have to give the maximum’ because it’s the last race,” he explained. “I want to make the maximum because that track is the worst for me and I don’t want to arrive last.” But here he also had the relentless focus ahead of this last crucial outing – “like if I have to play for the championship.  It’s not easy because already from Monday I have a lot of pressure, a lot of things to do. But I want to try for me the most important is try to be strong in the race, because I’m still a rider.”

It makes you wonder where this rider was during the rest of the year. You couldn’t accuse Rossi of not trying through 2021. He fell at 160mph in his final Dutch TT as well as suffering fast falls at the Misano and Americas GPs. Overall, he crashed nine times in 2021, his highest total over a season since that ill-fated switch to Ducati in 2011. But there is a feeling that once he knew his career was drawing to a close, risking everything didn’t come quite as naturally as before, when actual championship positions were riding on it. As he said on Sunday, “The results didn’t arrive and when you say, ‘OK, I’ll stop’ it’s very easy to give up.”

Finding this kind of focus in the midst of a rough season, and attacking 18 times a year no doubt becomes more wearying as you grow older. Rossi also offered a reason for recent struggles back in June. “Now that the bikes become more demanding because they are faster, you have the aerodynamics, and you can brake deeper, you can squeeze the bike more.” In a class this tight, where half a second is the difference between first and 15th, this recent adaptation was a step too far, even for a man of his talents.

But Rossi could still turn it on one last time. This fighting performance, as well as the VR46 Academy disciples donning a variety of his replica helmets, childhood hero Ronaldo – the Brazilian football legend – surprising him in the garage before waving the chequered flag and every MotoGP rider stopping to congratulate him on the slowdown lap, struck the right note. It was a fitting send off.

As fatherhood fast approaches, I don’t think anyone would argue this wasn’t the right time to hang up the leathers. But on his final showing, Rossi still found it within himself to end a 26-year career “in the top ten with the top ten riders in the world.” How many 42-year-olds out there can say that?