Skip to Content
Home MXGP A slippery slope: the first day of the last MXGP of 2017

Rain has been a frequent component of MXGP this year. Some events have escaped lightly – the Grand Prix of Switzerland and U.S. spring to mind for narrowly avoiding the worst of the wet weather – but others have been dowsed (Russia and Indonesia). The mouthful that is the Pays de Montbeliard round at Villars sous Ecot dodged a bleak forecast but some showers and hail stones dashed the steep hillside circuit close to the Swiss border in time to affect the race and qualification heat programme in the afternoon.

Villars is an epic setting and the track had been finely worked and sculpted for the second visit of MXGP this century. The dirt is claylishly claggy, to the point where it is perilous to even traipse around the inclines when it’s wet. Hard, rutty and sticky but also very slippery when compact; Villars was a challenge.

The harshest of the descents and ascents played a pivotal role in the first moto of the WMX FIM World Championship where Nancy Van de Ven, Courtney Duncan, Livia Lancelot (home favourite and former winner at Villars) and Kiara Fontanesi (with mud splattered MotoGP boyfriend Scott Redding in tow) were separated by just five points. Duncan led and crashed, Lancelot also fell after closing down a big gap from fourth position but it was on the last lap and the steepest hill where it all kicked-off.

Duncan had fought her way back into a hefty lead from Fontanesi, a cautious Van de Ven and Lancelot rallying hard again but came unstuck: literally. The peak of the long uphill drag had become a crash site for at least four bikes and the angle of the incline made it impossible for competitors to retrieve their machines. The track was blocked when Duncan made her way up. She veered off course, tipped over and tumbled. It took her a full 2-3 panic-fuelled minutes to ride up and attempt to clear the section, by which time Fontanesi had been through and skirted outside the track markers and Van de Ven had also followed. Lancelot had crashed again at the base of the hill but picked up to take third. Duncan – again almost foiled in her bid for a world title by factors out of her control for the second year in a row (she clipped a photographer and crashed fracturing her ankle and wrist last summer) – tearfully finished sixth and as the last rider on the same circulation.

The dispute for crucial points continued once the engines had stopped. Protests were lodged by Van de Ven as well as Duncan over Fontanesi’s alternative path to avoid the carnage. Race Direction reviewed the footage and the testimonies. The results were altered to classify the race a lap before the incident but further review later reversed the decision and installed the original standing, placing Fontanesi as the winner. The upshot? The points now look like this with one moto to go: Fontanesi – 238, Van de Ven – 237, Lancelot – 230, Duncan – 221.

WMX chronically lacks depth outside the leading elite but there can be no doubting the drama and spectacle. At one stage early in the first race today all four riders were hitting different lines in the same corner and rarely has any FIM competition seen a quartet pushing for a world title in the last fixture of a championship. For the fourth time in the last sixth years WMX will go right down to the final minutes. 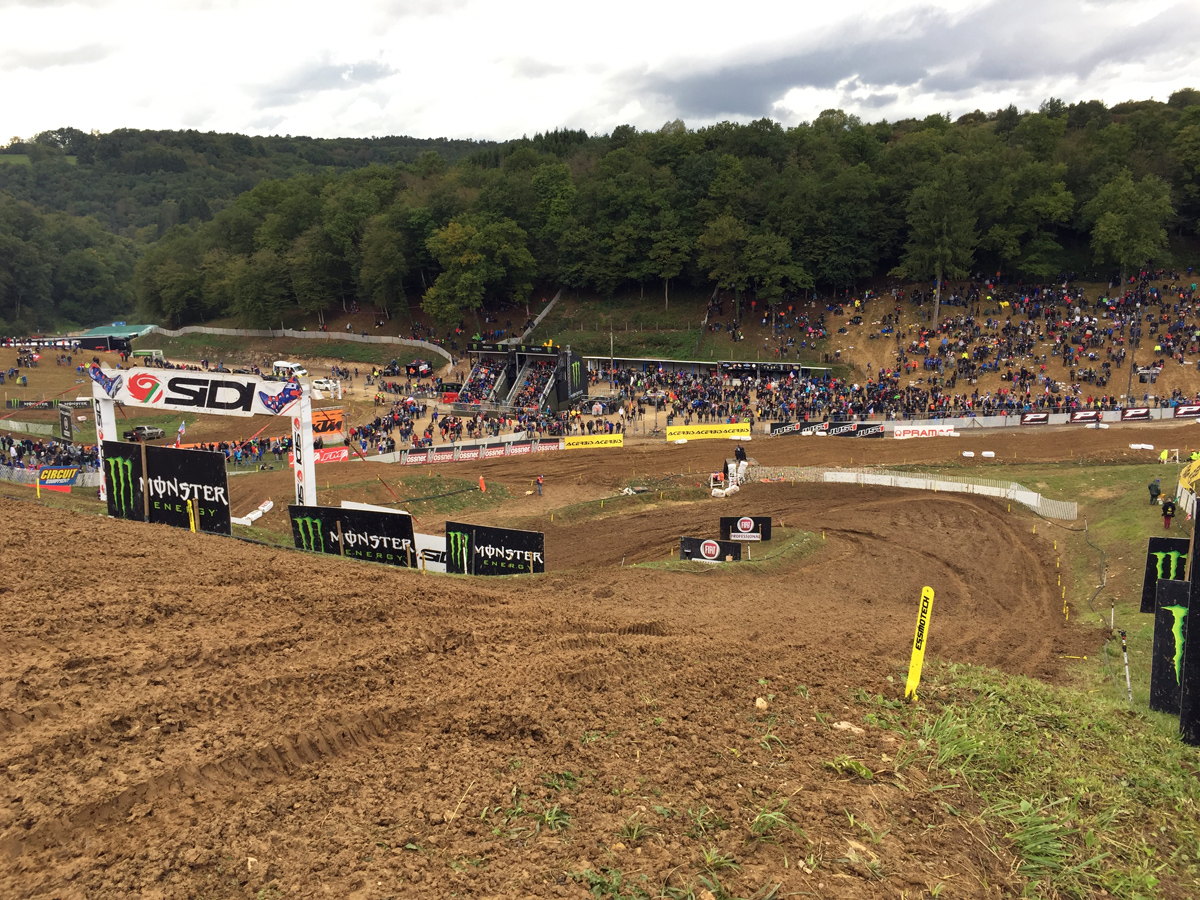 Villars was a risky prospect with some treacherous ruts and some big step-ups and drop-offs but the duel in MXGP between Rockstar Energy IceOne Husqvarna’s Max Anstie and Monster Energy Yamaha’s Romain Febvre saw the pair scrape wheel axles through the holes with abandon. Febvre, riding at the scene of his Pole Position and maiden MXGP overall victory in 2015 was cheered all the way with countryman Gautier Paulin distant in third and eventually passed by Jeffrey Herlings; relatively restrained by the conditions and compared to the loose and energetic figure in the sand of Assen last Sunday. But it was Anstie, with a faster line at the bottom of the hill through the waves and up to the finish that prevailed on the last lap for his first Pole in the premier class. “There was no point taking any risks for a Saturday race…but it is still a win and was really cool,” the Brit said as he eyes a third podium result of a very decent debut term and on a track state that could be similar to home circuit Matterley Basin and the Motocross of Nations in two weeks time.

World Champion Tony Cairoli was one of many who elected to skip the sighting lap as the rain poured and the Italian was a faller through the tight first sections. Arnaud Tonus, returning after his rib fracture at the Swiss Grand Prix, also went down as did Tim Gajser but both recovered to top ten slots.

MX2 was in the grasp of lighting starter and unsettled Suzuki rider Hunter Lawrence. The Australian streaked clear in a race that was equally soaked as the WMX saga. Jeremy Seewer battled with champion-elect Red Bull KTM’s Pauls Jonass (the Latvian only needing to finish twelfth if his Swiss rival wins the first moto tomorrow) but fell back to eighth. Brian Bogers (rumoured to be Tim Gajser’s new HRC teammate for 2018 after his HSF team’s announced link-up with Honda) survived for third and another Aussie, Jed Beaton, caught the eye to fourth spot.

EMX250 has lacked a standout athlete compared to previous seasons with the Guillod’s, Seewers, Prados and Olsens but wrapped with Italian Morgan Lesiardo claiming his first championship with a safe points scoring run in the opening moto.

The Grand Prix weekend started with a meeting between the manufacturers and Youthstream. Allegedly a number of topics were discussed but the intention was for a twenty-date 2018 calendar with four flyaway Grands Prix. The official schedule will be published in the first week of October. The MX2 23 age rule remains rigidly in place for the foreseeable, and the future of the troublesome USGP is still unclear. There is some concern among the paddock over the apparent collapse of the MX2 efforts by Kawasaki and Suzuki and another narrowing of opportunity. Plenty to discuss further then, and it will be curious to see how MXGP will work its way through a 61st year of being an FIM World Championship.

Villars is an example of a circuit that borders on being too tight and compact for 21st century Grand Prix but the efforts by the club and promoter to shape the venue cannot be faulted. Even with a turgid forecast and horribly irregular climate (there was even a full scale rainbow crowning the start gate and Skybox like a magnificent multi-coloured arch at one point) the action was tight and the track was passable and attackable.

More looming skies are predicted for Sunday but MXGP has a busy stage set before the curtain plummets.