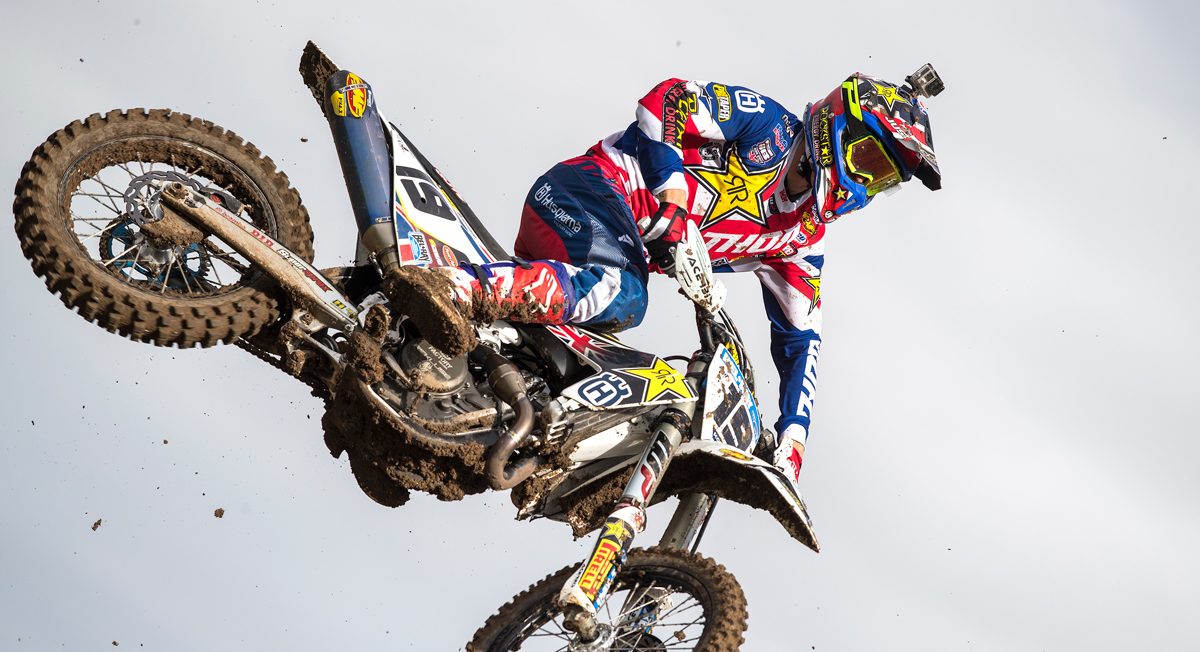 Max Anstie: Is this the turning point?

I can still remember Tony Cairoli’s bemused face. He was sitting next to a teenage Max Anstie at the Saturday press conference table of the 2010 USGP at Glen Helen. The Brit, then a young hopeful for the Star Racing Yamaha team and on the fringes of going Pro, took his turn and proceeded to stand up, microphone in one hand, can of energy drink thrusting forward in the other and delivered a lengthy theatrical exposition of such enthusiasm and innocence to be racing the Grand Prix (no small measure of confidence as well as knowledge that this was the kind of act would get him noticed) that it made almost everybody smile. There was a little bit of disbelief, props for the balls-out approach and smirks at the naivety.

The same phrase could be applied to a lot of Max’s career since and until he made another (incredible) statement last weekend at Matterley Basin.

Anstie moved from America and to Grand Prix for 2011 and after his ‘unveiling’ to international media in San Bernardino, and it was staggering to watch this obvious talent, something of a loner and an entertaining and insightful character lurch around his education. While his junior peer Jeffrey Herlings hit the ground running with the best team and one of the fastest bikes in MX2, Max rolled from one opportunity and between one promising display to a disastrous result like he was a first timer on ship deck in the roughest seas.

I can remember sharing a long and arduous bus journey from the 2012 Grand Prix of Russia at Semigorje back to the airport in Moscow with him. Max had been riding for the Gariboldi Honda team in his second MX2 year and was weighing up whether to opt for a factory Suzuki or Yamaha for ‘13. He chose the Suzuki and indulged in some early supercross outings on the RM-Z250 but it was another term of rough-and-smooth. By 2014 he was on the move again. His fourth brand and team in as many years: no wonder it took time for Anstie to find his way. Max’s father, Merv, was a constant in those early campaigns as his son waded through a period of determining where ‘home’ actually was: the somewhat isolated ranch in Hemet, California or some strong family ties in England or the Belgian base that he knew was necessary for top level preparation and where he lives with girlfriend Milly today. Max was also very close to his late grandfather in that time and used the extra paternal influence as a rock as he largely did everything by his own accord at the age of 19-20. 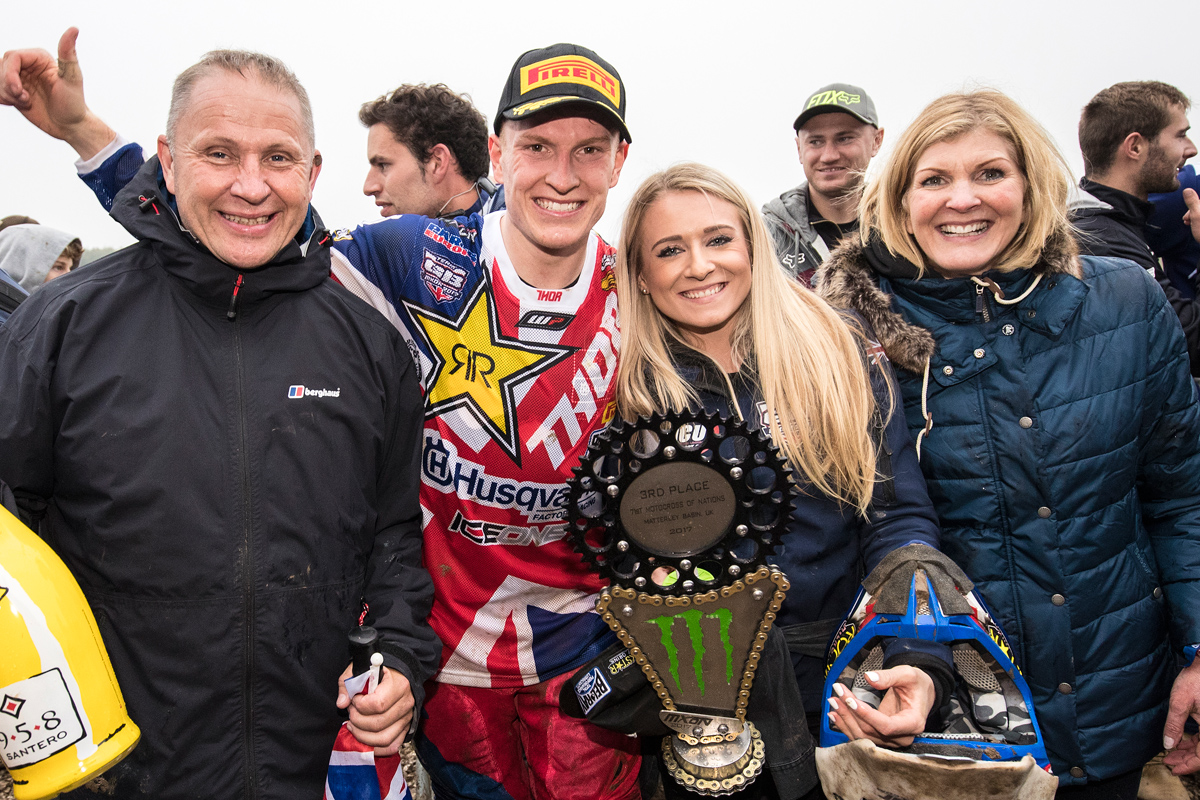 From Monster Energy Kawasaki to Gariboldi Honda (first podium finish in the Lierop sand) to Rockstar Suzuki to Dixon Yamaha, Max finally found a place in the British team where he seized his first Grand Prix victory at Lommel in 2014. Previously there had been some highlights and flashes of what-could-be, but also some inexplicable results in the depths of the top twenty. I can recall a senior figure from the Suzuki set-up commenting on Anstie’s signature for Steve Dixon’s team in 2013; the jist of the remark was that Dixon had one of the most talented riders in the MX2 class but that he would also discover his faults. From speaking to technicians in the British crew through the course of 2014 and 2015 it seemed that Anstie was a hard on the progressive technology that Dixon was aiming to pioneer (e.g. a three speed gearbox). The team had forged arguably the quickest of the carburetted four-strokes up until 2013 but Yamaha’s new fuel-injected model was being more stubborn in terms of finding the optimum sweet-spot for the Winchester-born racer. Even at Lommel 2014 Anstie was a victim of faltering electronics that almost caused him to lose the overall and he should have gone 1-1 earlier on in Qatar.

For 2015 Dixon broke a two-decade relationship with the Iwata firm and Anstie found himself back on KX250Fs and another challenge when it came to his hardware. He prepared well and fitness and focus was rarely an issue thanks to his work with Scot Kevin Maguire but the first half of the season didn’t make for pleasant viewing (a vicious crash at Qatar meaning he bookended the year with hospital visits). The second part was much better with three wins (a Lommel repeat) and five trophies in total. 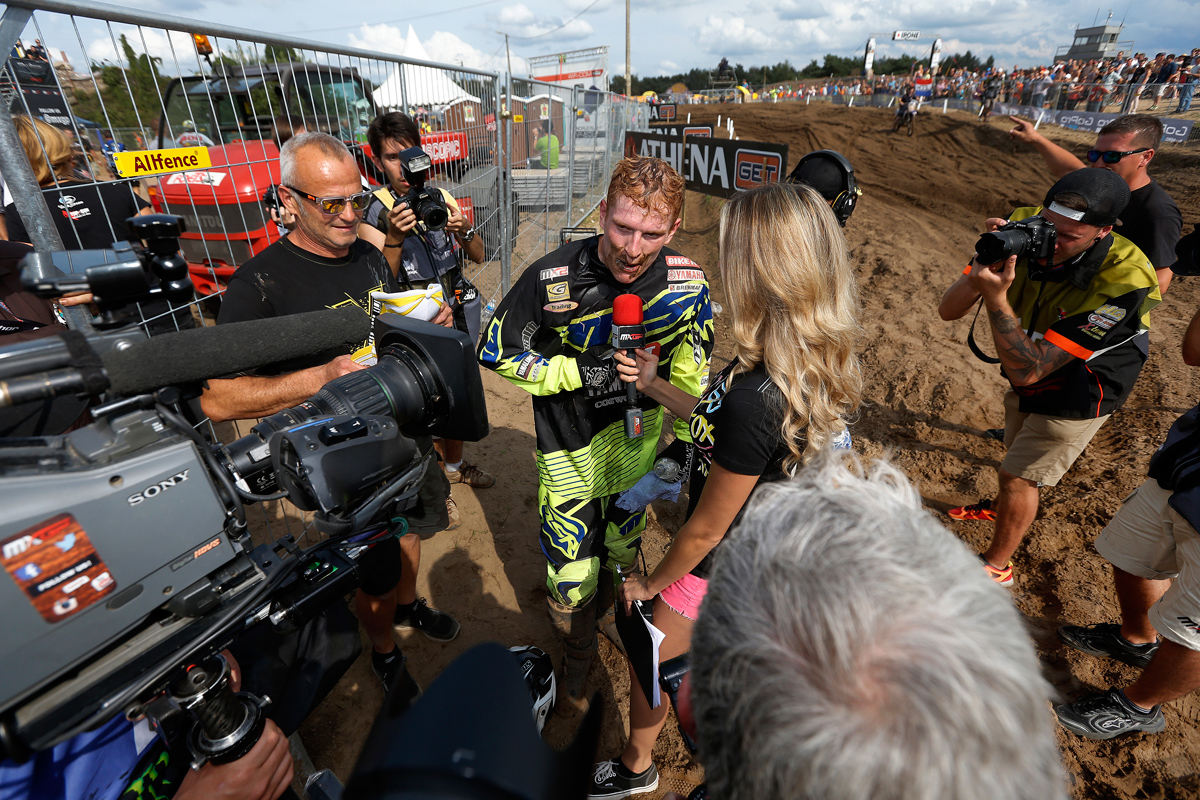 Anstie was reaching a new peak but had already decided on a career path before the results and Dixon-package started to chime. He believed his best (and last) chance of the MX2 title lay with Husqvana and Jacky Martens’ renowned squad. The Belgian has a record of developing youngsters and getting the best out of his athletes: Jonass, Tonkov, Olsen, Febvre, Nicholls, Mewse, Covington are just some who have come through his watch. Anstie, approaching 23, had yet another testing and acclimatisation period ahead but was also eying MXGP and a route into Antti Pyrhonen’s regimented and well-resourced IceOne crew.

In 2016 it looked like Anstie has miss-stepped again. The combination with Dixon had finally looked strong and capable of world championship form, especially with KTM’s Jeffrey Herlings out of sorts and in more injury misery. Max would have his own physical nightmare with a truly shocking incident at the ’15 Motocross of Nations in France where he was landed upon in practice and fractured vertebrae in his back and neck. As well as a winter of recovery he was leaving a winning team and would show more inconsistency that kept him away from the recovered-Herlings’ level and form in 2016 (he would finish third in his last MX2 tilt). It seemed that Anstie couldn’t quite work out the best direction for him and his career.

While the Jacky Martens episode did not put him into title reckoning Anstie still won two Grands Prix. Compared to Herlings he came into MXGP in 2017 slightly under the radar but had found a fantastically effective environment at IceOne that was conducive to rapid development on the FC450. Pyrhonen fashioned a schedule and set of parameters that took away the doubt. Anstie finally had the exact support structure he needed and for the first time since 2012 was not a team leader. The presence of Gautier Paulin and Max Nagl meant that #99 could spend time deducing the higher demands of MXGP without needed to satisfy the urge a factory team has for results and profile. Anstie delivered though, and outshone Nagl and sometimes even Paulin. 2017 was a breakthrough: the elements of technique, concentration, potential and mechanical contentment coming together to help conjure podium finishes in Italy, Holland and France. And then came the Nations. Two starts and two displays of maturity, speed and superiority that could well be hard to top.

We spoke to him immediately after the third moto at Matterley, with kids desperate for a shirt or some memento and a queue of other media waiting for more reactions; delivered in the same giddy and story-telling fashion that echoed that first introduction back at Glen Helen seven years earlier. It takes him three attempts to organise his thoughts and words before something comes tumbling out. 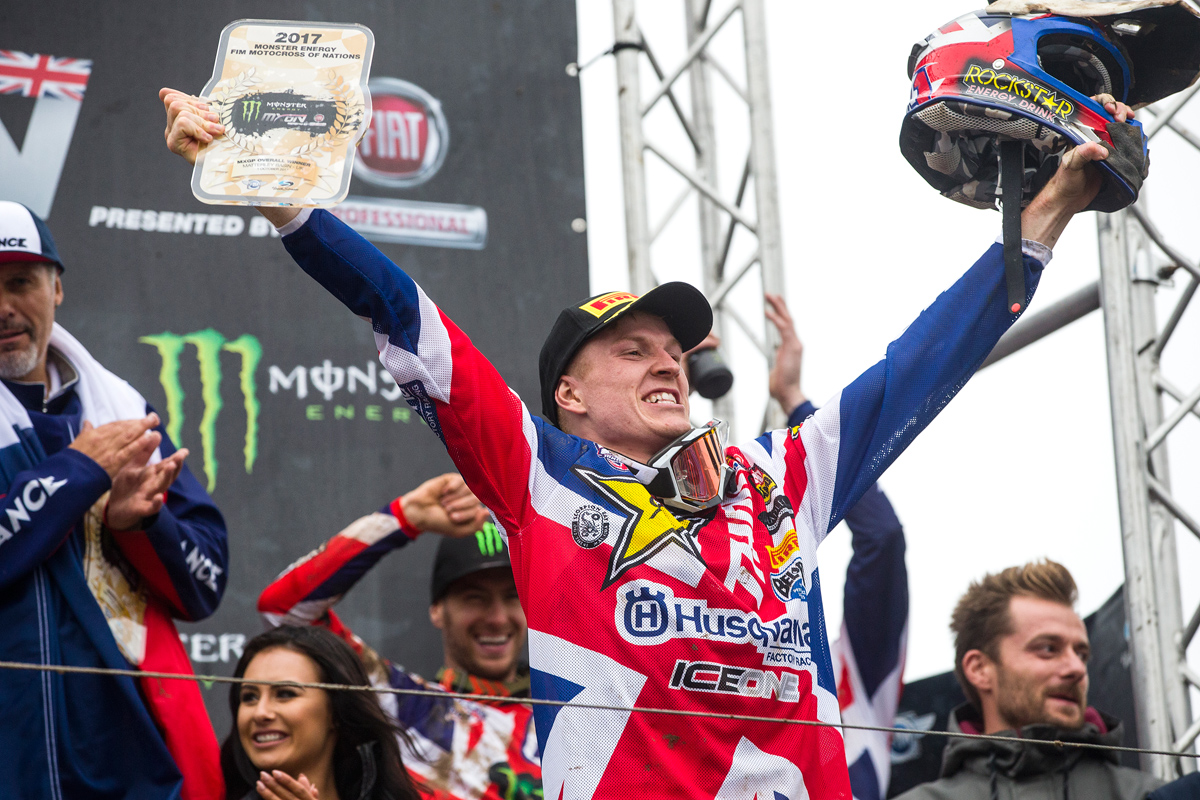 “It is just unbelievable. In France, in Villars [scene of the final round of MXGP two weeks previously where he battled Herlings for the win], Jeffrey was behind me and I felt strong. I was good but also slightly nervous about that and trying to win a race. I felt like I learned from that. I had two weeks to programme and process that. This week I felt I was a step stronger and I was like ‘no, he is not going to pass me and I’m not going to make a mistake, I will stick to my lines and do my thing’. It kinda worked and I believe I can take this and the last few GPs into the testing period and the next off-season. I want to be on-it from the start. I want to be building and building and I feel good to be racing. I have a lot of respect for everyone out there because they are all amazing riders.”

“This is a once-in-a-lifetime thing. I feel a great sense of containment and content. Achieving is about results but I also feel ‘complete’ in that everything I have done has been good and has gone towards this, all the training and the riding. I feel calmly happy. I’ve had a lot of s**t years on the 250s and teams, places and races that have been tough. I remember racing here [Matterley] in 2012 when I crashed on the first turn fighting for 25th. I was like ‘mate…I’m better than this…’ I’ve had times when I was so far at the back. I remember being at my friends house nearby and just laying on the floor thinking ‘it has all become too much’ and that I’d have to book flights, organise the team, make a plan and then try to train, try to practice. I was trying to do everything but now my team is so good. My girlfriend and the group around me just make my life so easy and the team give me a plan every single day and it allows me to focus. That’s it. I feel that I am able to unlock the potential I have.”

“This [the nations] is very good and I’m over the moon about it…but I want it more often. I want to build up to something like it because I know it is impossible to do it all the time. I just want solid races. I’ve had a lot of fun this year and it is so good to be able to race with them. To battle with Cairoli! I remember watching him here in 2006 on a 250 beat Villopoto. Stewart was unbelievable but watching Cairoli and Everts and now I am racing with him. It’s cool. It’s a bit hard to believe. I’ve won a Nations! It’s cool.”

Max has found his place, and his calling. He is making the right noises about his situ both professionally and personally. His first challenge in 2018 will be keeping clear of injury, then accepting his status next to Paulin and trying not to feel the weight of Matterley. 2017 was about formation. 2018 will be the real test of Max Anstie. Could he finally be set in the right direction? It seems like he has always been capable of a ‘Matterley’ and, indeed, his MX2 win in Switzerland in 2016 was impressive stuff but he needs to stitch together a term with an improved presence near the front of MXGP. He is realistic about the class, which is a big help, and at the age of 25 next April it is hard to imagine that he won’t be one of Herlings’ biggest challengers in the years to come.

In a very fortunate case of excellent timing, watch out in the next issue of OTOR on Tuesday with a feature interview already planned with Max before the Nations ‘changer’.