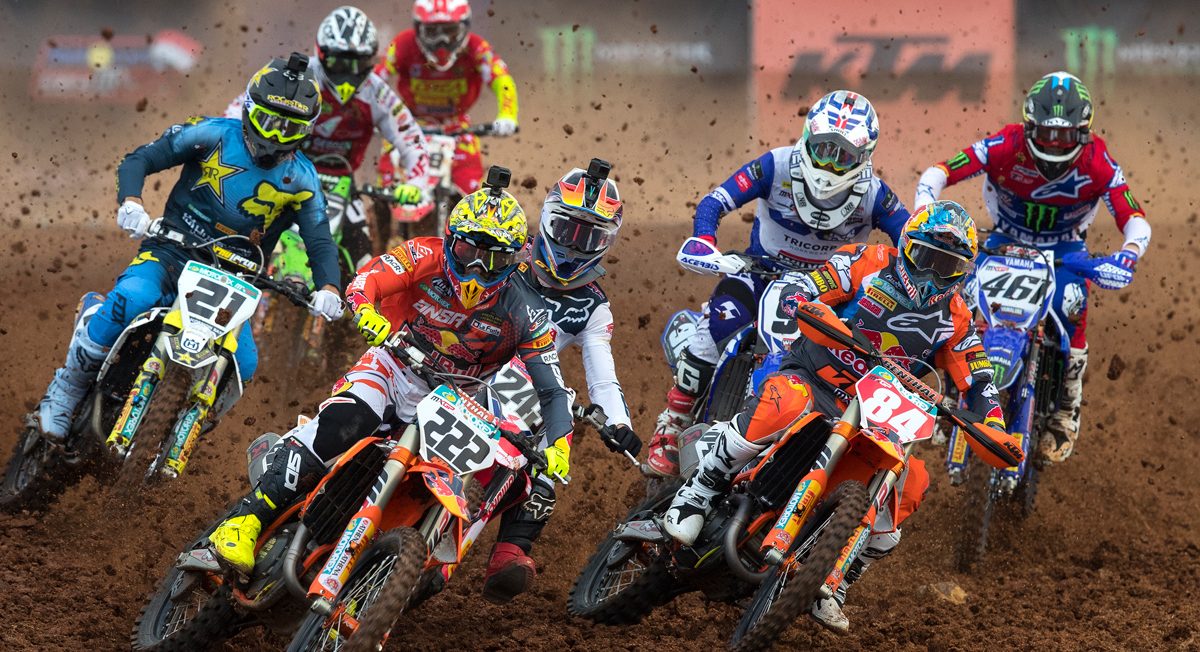 How to compliment greatness?

Recently I was able to write a piece for British national newspaper website www.telegraph.co.uk asking whether Marc Marquez can be regarded as one of the best MotoGP riders of all time after five titles in six years. Last week I was working on a story and notes for two prominent motocross publications about Jeffrey Herlings in anticipation of the next wave of accolades to befall the MXGP World Champion after a remarkable 2018.

It is an endless and often fruitless fight to get motorcycle racing into mainstream UK press (although I suspect this is related more to slithers of budget and thinly stretched staff rather than a lack of interest or the wish for more diverse coverage) so the chances of highlighting Herlings’ feat of winning 17 from 19 Grands Prix and dropping only 17 points in 38 races all year will almost certainly go silent.

In specialist circles it is a different matter. Herlings is rightfully being feted for a truly unparalleled campaign that evidently required a ‘saintly’ level of dedication and devotion to accomplish.

The Dutchman now owns four titles and eighty-four Grand Prix wins. In one aspect he is far from the all-time benchmark for the FIM World Championship – Stefan Everts – and needs another six crowns. With another he is tantalisingly close; just seventeen more victories will drag him up to Everts’ 101 total: an amount of trophies thought untouchable when the Belgium retired in full glory back in 2006. The hefty carrot swinging from that string is enough to drive Herlings into the same hermit lifestyle again – he has already indicated as much in his many words and comments since the landmark victory in front of a rapturous home crowd at Assen in September. 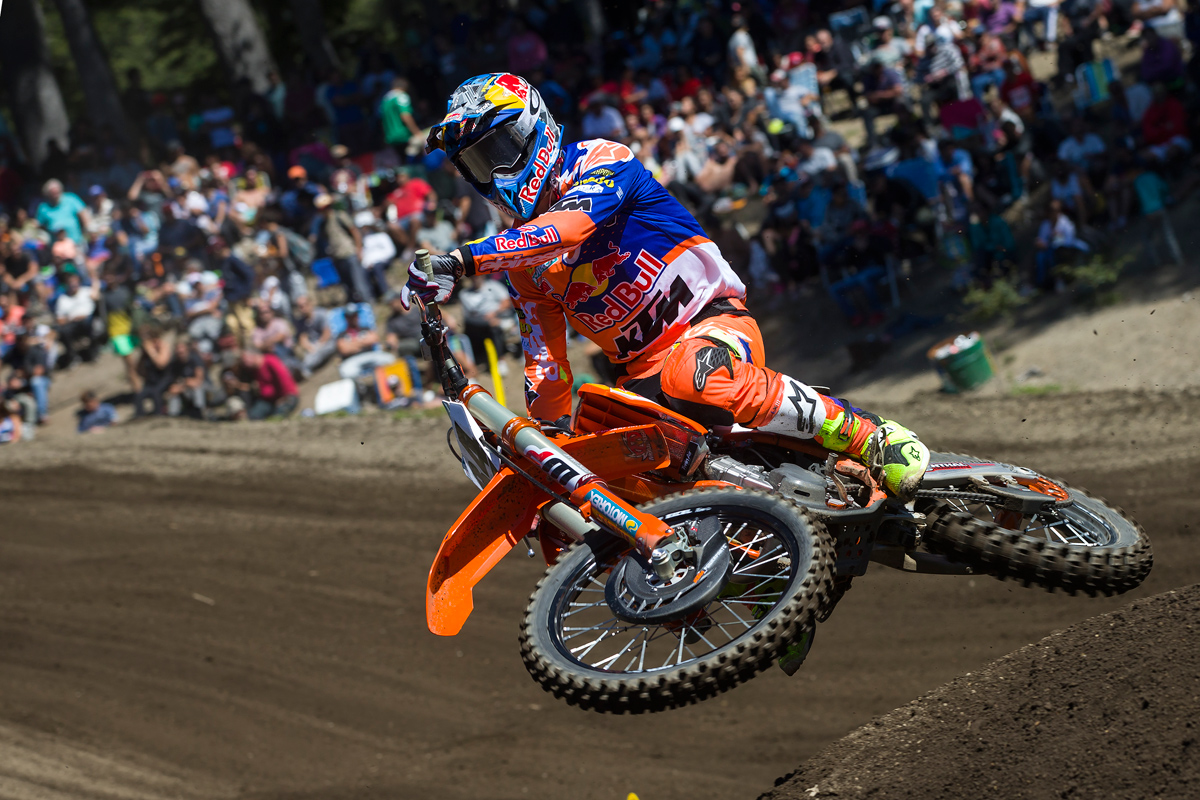 There are few seasons to compare to Herlings’ rout in 2018 (Everts’ 15 wins from 16 in 2006 comes damn close) but let’s not forget this was not a one-man show. Jeffrey can and will be regarded as one of the best in the history of Grand Prix (he already has nine years of world championship experience under his belt and has only just turned 24) but he managed it at a time when the MXGP gate was full of eighteen other GP winners and against another rider still at the height of his powers. Tony Cairoli had already stamped his claim alongside Everts as a greatest of all time long before he schooled the finest riders in MXGP in 2017. in 2018, despite being nine years older than Herlings, was the only one who could offer resistance.

Herlings will have worried, cursed and despised Tony Cairoli’s presence at various points in ‘18 but I believe he was also very thankful that #222 was, in his own words, enjoying “one of my best years”. Tony struggled with thumb, hand and knee setbacks as well as the realisation (for the first time) that someone else was able to reach and supersede his high level of race pace and consistency. That unusual significant threat to his hegemony (itself quite outstanding after nine seasons in which Clement Desalle, Gautier Paulin, Max Nagl and Christophe Pourcel could only offer brief usurpation) naturally forced errors and some uncommon question marks in the Cairoli camp. Even his starts were on point (19 to Herlings’ 8) but it did not stop Herlings streaking to the kind of form that saw #84 acing all of the last sixteen motos of 2018.

The most satisfying element of Herlings’ first MXGP title at just the second attempt will be the fact that he defeated Cairoli. If the action on the track was not always close then in terms of profile, status and impact this was very much another ‘battle’. In fact hearing Tony admit “it’s an honour to finish behind Jeffrey because he is the fastest rider in the world at the moment and I didn’t finish second to a slow guy” must rank as one of the ultimate compliments and red roses from the many thrown at Herlings and his career. 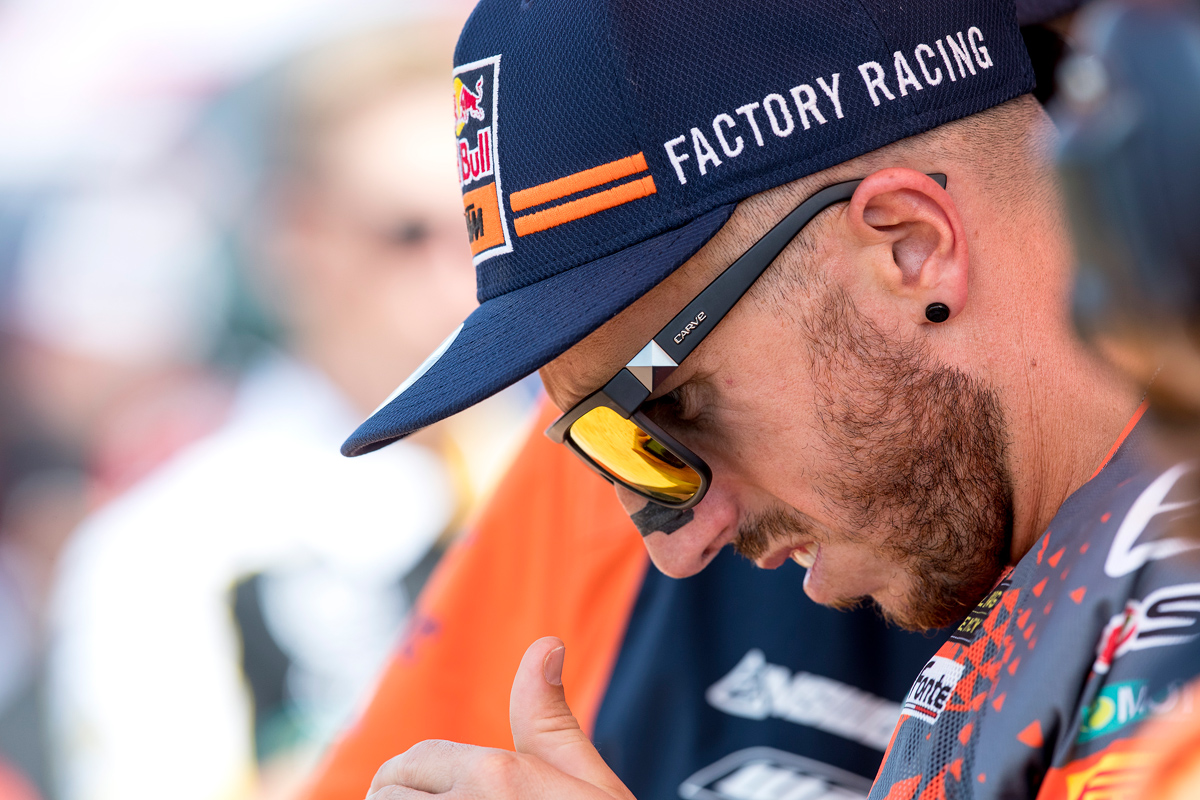 We had cause to gawp at Tony’s turnaround in 2017 and bring his own stats to within striking range of Everts both for victories and titles. TC holds eighty-five, and nine championships and in my opinion is the most versatile, enduring, surprising and unbeatable racer I’ve seen since 2001. He claims he needs to work on longer and more intense race speed for 2019 and match Herling’s frenetic attack mode; whether he discovers this extra few percentage at the age of 33 will be one of the biggest questions of the off-season and in MXGP currently.

Cairoli was brilliant in 2017. He was also in 2018. He beat Herlings in Spain and motored to a 1-1 in Jeffrey’s absence in Italy. The following Grand Prix in Indonesia must rank as one of the most frustrating moments of the year: an occasion when Herlings was able to sniff the old odour of pre-collarbone-break routine and snuck back in the door. Cairoli’s thumb injury was a decisive downer at a time when the championship gap stood at a meek ten points. 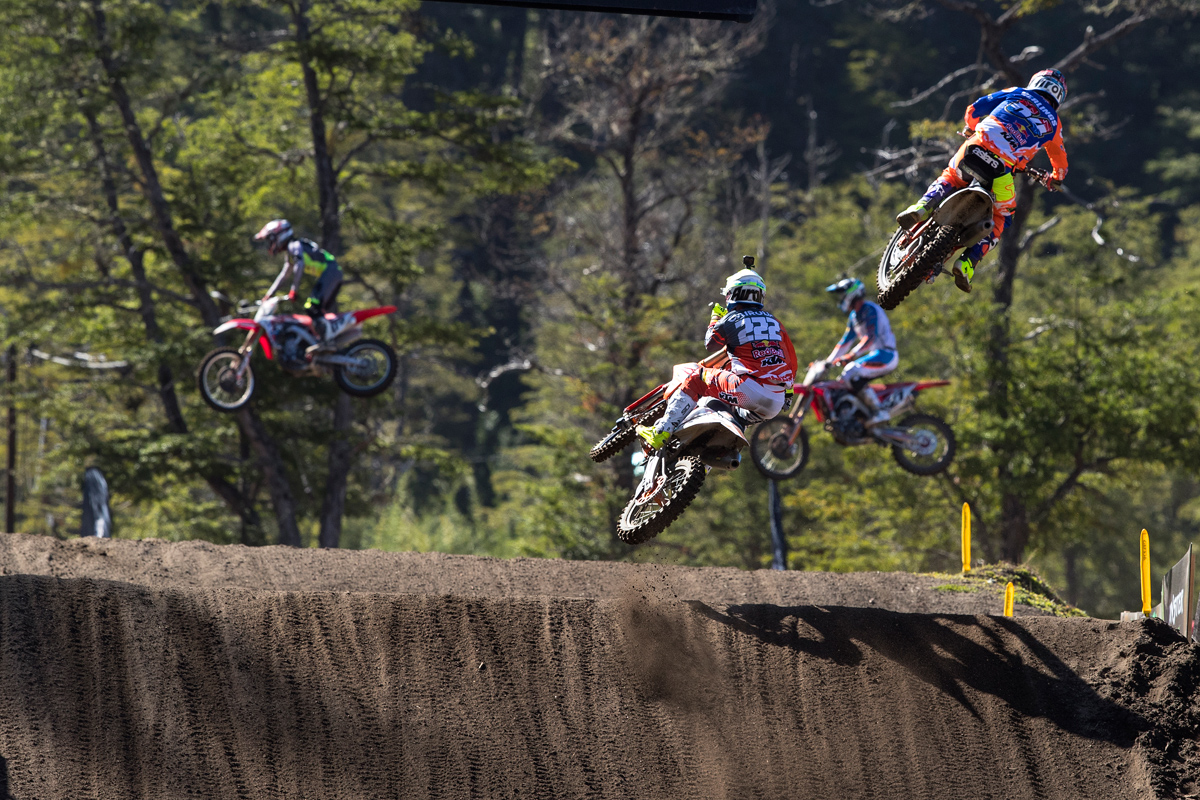 If the writing was not already high graffiti in Argentina for round one when Herlings produced a performance for the ages in the last nine minutes of the second moto then Indonesia was a more indelible scrawl.

It was also curious to see Tony bullied by Herlings at Matterley Basin and one of the very few times where the duel got physical in what was otherwise a cordial and professional spat within one team, brand and collective effort. If Cairoli had not tweaked his knee then what kind of retort would be have managed?

As the longest season in the history of the FIM Motocross World Championship wandered further into an #84 shadow Cairoli persisted, chasing the red plate holder to another three runner-up positions. That Herlings could not rubber-stamp everything until his home grand prix and one race before the 2018 closer at Imola was another doff of the cap towards the outgoing No.1. 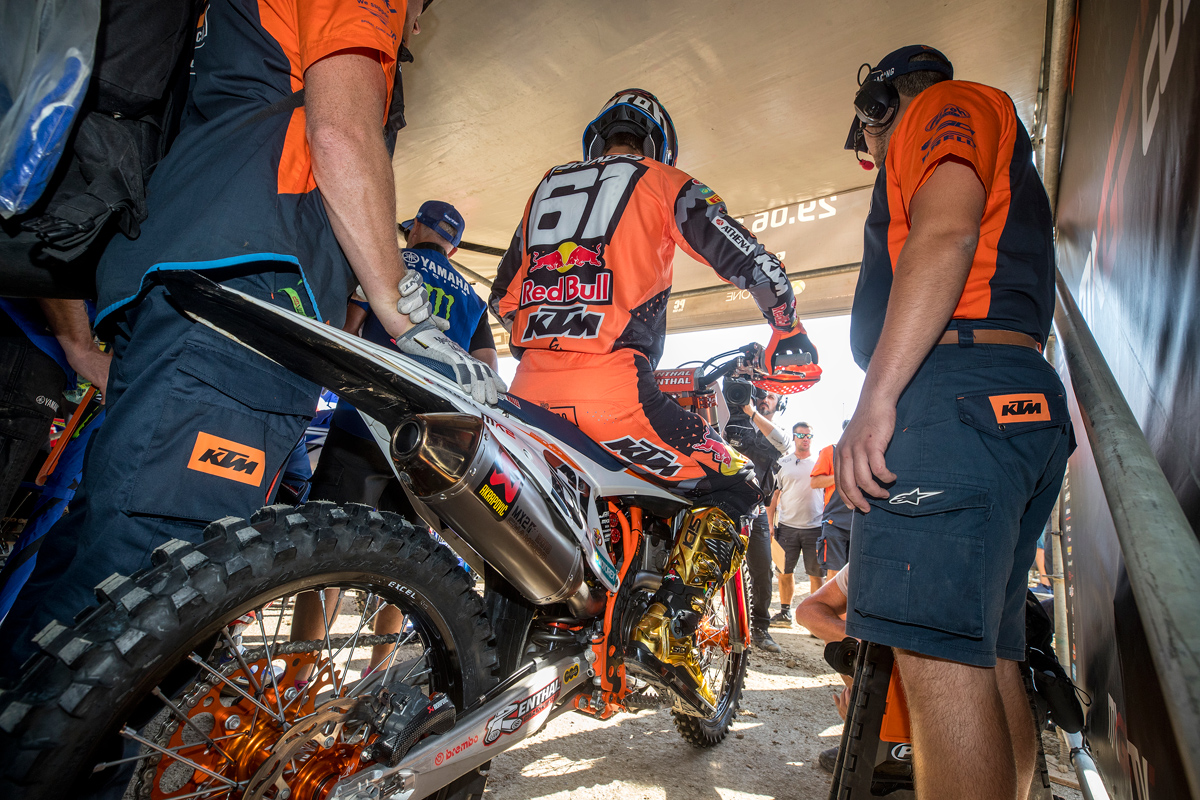 If anything Herlings’ might in 2018 is only overpowered by one entity: his employer. KTM ruled both MXGP and MX2 for the seventh time since 2010 and the premier class for the seventh time with a total of two different bikes (350 & 450) and riders in that period. Four of their five factory riders in 2018 finished 1-2 in each series and the fifth, Glenn Coldenhoff, not only had his most consistent year in MXGP but wiped the floor with the international racing fraternity at the Motocross of Nations. Their 450SX-F technology is still the reference in motocross (and supercross) and the 250SX-F must rank as one of – if not the – most successful motorcycles ever since its creation in 2003. Eleven MX2 titles have been claimed since 2004 and with eight different names.

Herlings fashioned a championship to remember and had teams and other manufacturers talking about “how to beat Jeffrey” rather than simply “win grands prix” but it is also hard to see past this distinctly orange era.