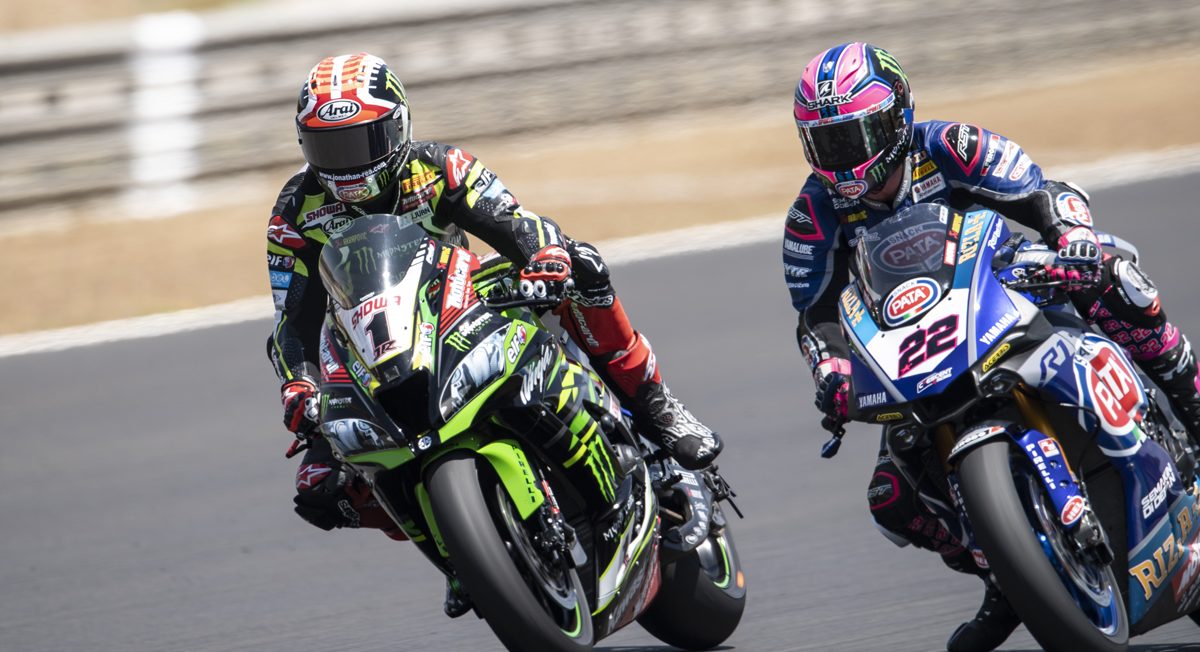 The rights and wrongs

When I was a kid growing up watching racing on TV there was always crashes and disputes. They tended to be settled in a rather crude way by two blokes facing-up to each other and having it out, either at the side of the track or in pit lane. By the way it was always blokes, it was the 1970’s and 80’s, the very thought of women racing wasn’t really on the cards.

In 2019 we live in a world that is descending into a virtual reality. Very soon we won’t leave the house and will just sit in a chair with a VR headset on ‘living’ our lives. I am sure there is a movie in that idea.

Last weekend at Jerez was probably the most incident packed couple-of-days in WorldSBK for a long time, for as long as I can remember at least. However, most of the dispute resolution has been played out on social media. I say most, but not all.

We have all seen the action from Saturday’s race and the crash that happened in ‘that’ corner. As many pointed out, it wasn’t the first and for sure won’t be the last such incident there. Regardless, whichever way you look at it, Jonathan Rea got it wrong, and straight away knew he got it wrong. I think there was probably even a split second before the contact where he knew. Looking at the footage in the moment before the contact he shifts his body weight to try and avoid contact.  However, as many people have said – Alex Lowes included – that is racing.

It is important to know when you are wrong, to admit it and apologise and equally important for the wronged party to accept that apology and move on. In any pressure situation, in the heat of the moment, I would guess that most people would make a rash decision. Emotion and adrenaline make a potent cocktail and when it spills over it quite often doesn’t end well.

There is no way that Jonathan came down the back straight thinking ‘I know what I’ll do, I will knock him off’. That is clearly ridiculous, but some of the comments I have read would have you believe that was the case. JR is a racer, he is driven by the desire to win, if he can’t win he wants the get the best from the situation and given where he was on track he was always going to try to pass Alex on that last lap. As race fans is that not exactly what we want to see?

Equally, Alex was racing for a podium finish and he wasn’t going to give it up. JR made a bold move, it didn’t work, there was a misjudgment and sadly Alex was taken down. Had there not been any contact I reckon Rea would have run wide and Lowes would have cut back again, on the racing line and had the drive up the straight to hold the third place.

I did feel especially sorry for Alex as he has been working so hard this year and slowly-but-surely has been putting together a series of credible results. No one could have grudged him that third place on Saturday, which would also have put both Yamaha’s on the podium, with team mate Michael van der Mark in second.

However I also feel sorry for Jonathan. I saw him sit up after Alex fell and raise his hand to apologise, he stopped at the Yamaha pit box on the way to parc ferme to do so again and you could hear the emotion in his voice in the post race interview.  During that moment when he stopped in pitlane Alex Lowes’ wife Corinne let all the adrenaline and emotion spill over. It immediately overshadowed the crash as the main topic of conversation at parc ferme. Predictably social media erupted and again the keyboard warriors waded in.

The confrontation maybe wasn’t the best way to deal with the situation but after 19 nail biting laps, when success is snatched away and you see your man, in a sporting but also a personal sense, lying on the floor, the cocktail overflows. How many times do we see fans in other sports screaming copious amounts of abuse at a referee following a dubious decision, or weeping uncontrollably at their team’s defeat? It’s why we invest so much in sport. There is a perverse pleasure in being taken on that emotional rollercoaster and I am happy to see more of it It shows that people really care, that they have a genuine human side. It is something to be admired and when the dust has settled accepted as part of the rich life we lead in the sporting world.

In a situation like this all of your emotions are on display. It takes a lot of courage to stand up and be counted in front of other people and those other people know exactly the meaning of your words, be they good or bad. Sitting in front of a screen tapping on a keyboard is not in my opinion the best way to resolve a situation like that but in the world of ‘Player One’ it seems to be becoming the norm. So here I am myself, sitting in front of a screen, tapping on my keyboard. However, every week I write something I am paranoid that I will upset someone I have to work with and photograph with what I have written. I accept that this, amongst other things, marks me out as a photographer and not a journalist.

That said there were some pretty good reposts over the weekend on Facebook and Twitter and when I caught up with things on the way home on Monday I did get a bit of a giggle.

Chaz Davies had a fair few digs at Marco Melandri after their crash in race two on Saturday with him suggesting that the diminutive Italian put some lenses in the glasses he wears.  Melandri is wont to wear a pair of garish spectacle frames with no lenses in them when on the grid or in parc ferme. However, he had no trouble seeing the criticism coming his way and was quick to blame the Welshman for the incident in an interview with WorldSBK.com. The stewards didn’t see it like that and have slapped a 6 place grid penalty on him for the next Tissot Superpole race in Misano.

Melandri was also the centre of controversy on Monday. Michael van der Mark took to Twitter to hit back at a tweet and a report in Italian website Corsedimoto.com where journalist Paolo Gozzi claimed that his performance on the weekend was down to changes and improvements that Melandri had brought to Yamaha. Van Der Mark was quick to praise the hard work of the entire Yamaha squad for the improvement and briefly got himself into an twitter spat with Gozzi over the veracity of the claim.

The Dutchman rightly pointed out that Gozzi had not been to any media debrief over the weekend or spoken to him about it, whilst the Italian claimed to have got all the information he needed from Yamaha Racing boss Andrea Dosoli, with whom he had dinner on Saturday evening, pointing out to Van Der Mark that “I haven’t see you at occasion :-)”

That is a bit unfair in my opinion. Gozzi would have asked for an interview with Dosoli and it would seem was invited to do it during dinner, most probably in the hospitality facility Yamaha have at the races, so Van Der Mark was never going to be party to the conversation. The media debriefs for the teams on the other hand take place every day at an allotted time in an allotted place, a schedule for which is published at the start of the race weekend. For me, armed with the information from the interview with Dosoli, I would want to ask Michael “is it true that your results this weekend are thanks to changes that Marco has suggested for the bike?” Then you have the full story.

What I didn’t like in the translated version I read was that the story starts with “Michael Van Der Mark is not a highly regarded pilot in the Superbike paddock……”  Now it may just be in the translation but – for one – that is not true, and secondly I don’t think a comment like that is very respectful. I know several riders and team managers who consider Michael good enough to be a future World Champion. I thought Michael’s twitter comments were very considered and reserved but I know Michael and I am sure he will have words in a couple of weeks time in Misano.

One thing is not in dispute, even if Melandri proposed the changes to the bike, Van Der Mark made the best use of them and the results sheets don’t lie with two runner-up places and a win for the Dutchman over the weekend. That victory came after another display of human frailty when Alvaro Bautista crashed out of the lead at the end of the first lap in race two. Bautista had romped away with convincing victories in race one and the Superpole race but tucked the front in turn one on Sunday. Whilst Van Der Mark was delighted with the win he admitted that he was a bit disappointed not to be able to go toe to toe with Baustista. He felt he had the pace on Sunday to take the fight to the current Championship leader.

The result keeps the pot simmering. There is only a 41 point gap at the top of the table between Bautista and Rea and at the half way stage in the season Bautista can ill afford any more slip ups.

From a work perspective and for a host of reasons, I didn’t enjoy Jerez but I did enjoy the racing. It had everything we want to see, close action; heroes; villains; raw emotion and in the end an unexpected result. Next up on the schedule is Misano. I don’t like it either. It’s a dull track to photograph in my opinion and last year I had my kit stolen from the press office so it’s a race I will be glad to see the back of this year. However, if we get all the ingredients we had at Jerez then I will be happy to have a ringside seat once more.