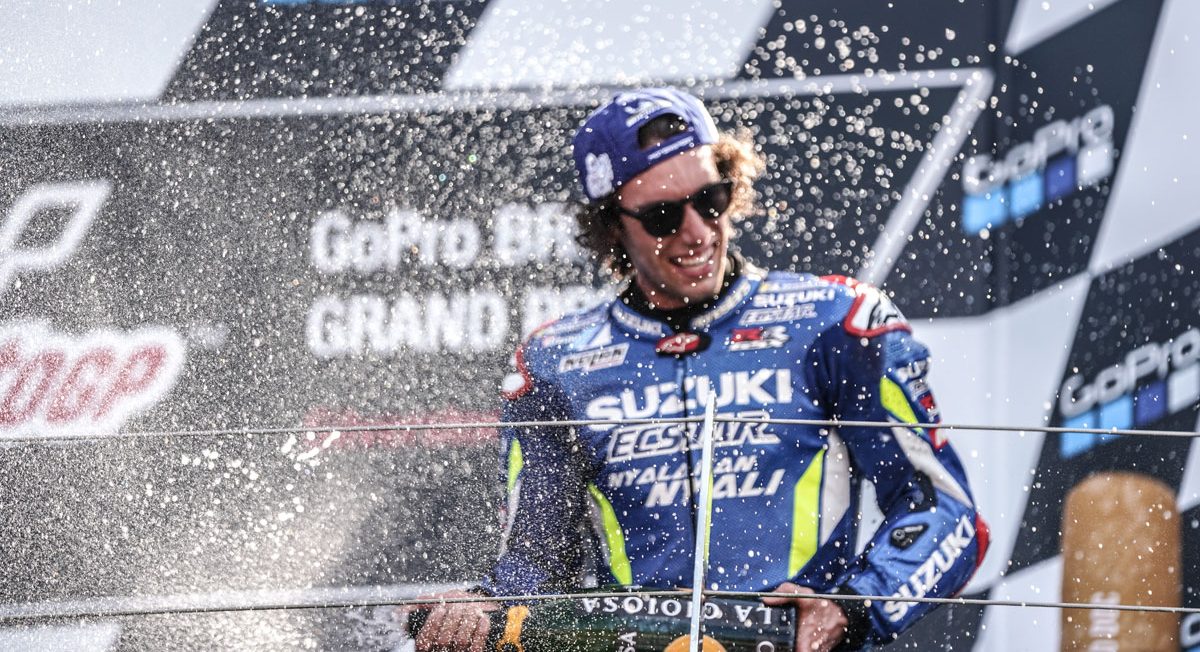 What a difference three weeks can make. At an overcast Brno at the start of the month Alex Rins broke from the norm and delivered an appraisal that left no one in any doubt of where he really stood. So often a shy, quiet figure when in the glare of the media spotlight, content to close lines of discussion down and keep analysis to a minimum, here he was fired up and ready to deliver a barb that meant headline writers could take the afternoon off.

Memories of a heated qualifying session were still fresh: there was, of course, the indignation of watching chief rival and reference Marc Marquez take pole position by the ludicrous margin of two and a half seconds. But what really irked Rins was the reigning champion’s actions when he chased a time mid-session.

Marquez had messed up turn five, run wide and looked around. Jack Miller and Rins were fast approaching and after letting the Australian through, the #93 shifted back onto the dry line in front of the Suzuki. “Sincerely he disturbed me,” an uncharacteristically animated Rins admitted. An entertaining on-track exchange followed, culminating in Rins rushing to enter pit lane ahead, pushing Marquez toward a pit lane wall at low speed, forcing the Honda rider to shut off.

“I think he has no respect for other riders,” Rins fumed soon after. Soon, when reverting to his native tongue, he would add, “maybe his Moto2 crash [in 2011] made him lost his sight.”

If you’re going all in, do it with conviction. But as if fearing a public backlash, Rins soon backtracked, apologising for his remark on Marquez’s vision via Twitter. Marquez barely blinked when his countryman’s comments were put to him. “I’ve won a title or two since then, have I not?” he shrugged. In their first public spat, the elder of the two had come out on top.

Perhaps that was one of the reasons why the outcome of an astonishing British Grand Prix was so surprising. In his first year as a certified challenger Rins has endured a setback more than he’d care to remember. Like similar disappointments at Le Mans and the Sachsenring, Rins didn’t dwell on the Brno affair. Unquestionably this was his finest grand prix performance to date. There was no cowering at Marquez’s reputation here. He sprang from the middle of the second row, weighed up his rival and pounced not once, but twice to win the joint fourth closest premier class bow – 0.013s separated them both – in history.

Miller paid Rins the highest compliment earlier in the year. “Every time I sit down with the team and make a debrief or a plan for the race, we always say Rins and Valentino [Rossi], they’re going to be there in the race. Doesn’t matter where they qualify. You know they’re going to be there.” Perhaps that was another. All weekend, the Suzuki’s pace was strong, an equal of the Movistar Yamahas of Maverick Viñales and Rossi. But Marquez and eventual first corner crasher Fabio Quartararo were a step ahead.

But crew chief Jose Manuel Cazeaux works in a wily way, ensuring race readiness is rarely sacrificed for headline grabbing times. Session results can be deceptive. And Rins has yet to truly master the high-pressure, high-stakes art of qualifying. But with the exception of Le Mans and the Red Bull Ring, the 23-year old and Suzuki have honed consistency to a level almost worthy of a title challenge.

So it proved at the resurfaced Silverstone. Rins knew a strong start and combative first lap – two of the veritable strengths he has added to his armoury this year – were essential to contending for the leading spots. “I knew before the start of the race that Marquez and Quartararo were the two guys to beat,” Rins later said. “If I was with them in the first part then in the end I was able to have options.”

As it turned out, the man Rins replaced would be his greatest ally here. Marquez recognised Viñales’ own late pace as a concern and thus refused to relent when in front. Silverstone’s new surface offered up grip aplenty but track temperatures of 44 degrees, an abrasive surface and Michelin’s inexperience with it meant rear tyre wear was an issue. Marquez’s fear of Viñales joining in meant tyre management had to be forgotten. As he did at Brno, the strategy was “to make the front group smaller.”

From his time in second, Rins could see the Honda’s drive onto the Wellington Straight would be his undoing if he stayed ahead. He was smart to Marquez’s game of letting him by on lap nine and knew he had to hold back for fear of getting caught out late on. “I was riding one lap in front of him,” Rins recalled. “But very quick I let him past because he was much faster than me on the acceleration from turns 14, 16 and 17. I didn’t want to show my weakness.”

It was an inspired move. And it soon became apparent he wasn’t just hanging onto Marquez’s lead on lap 17. A moment on the exit of Club gave the Honda rider breathing space, but come the start of lap 18 and Rins had closed back in. Then he dared where most wouldn’t. And not just once. Rins’ – and the Suzuki’s – ability to conserve the rear tyre has been a strength that was apparent from his rookie campaign.

That was decisive as the race lurched toward its nail-biting conclusion. Marquez’s top speed advantage and braking prowess kept him ahead into the critical Brooklands-Luffield section. But his rear tyre was shot. On the final lap Rins was a full 7mph quicker at the apex of Woodcote as Marquez staggered for traction. Twice Rins tried at the final turn, conjuring up images of Barry Sheene, one of Suzuki’s former prodigal sons, 40 years before, by riding around the outside on the penultimate lap. Switching to the inside for the final time brought about one of the moves of the season.

It was a coolheaded, combative display that would have made Marquez proud. ‘perfect’ and ‘fantastic’ were two words used by Brivio to describe the third Suzuki win on his watch in the aftermath – but not surprising, as experienced engineers at Suzuki are well aware of their rider’s ability. “The way he can take the bike to the limits without ever look like he’s close to it is so impressive,” reckoned Tom O’Kane, crew chief to Sylvain Guintoli, earlier this year. Brivio concurs. “Sometimes he does great things and he makes it look as though it’s easy for him; not easy, but natural,” he said at the end of 2018.

For Marquez, Oscar Wilde’s phrase is applicable. To lose one race at the final turn of the final lap may be regarded as a misfortune; to lose two in as many weeks looks like carelessness. Only a rider of genuine class could show the seven-time champ up like this.

This was a statement performance. And on this evidence only a fool would bet against Rins producing more of them in the coming months.