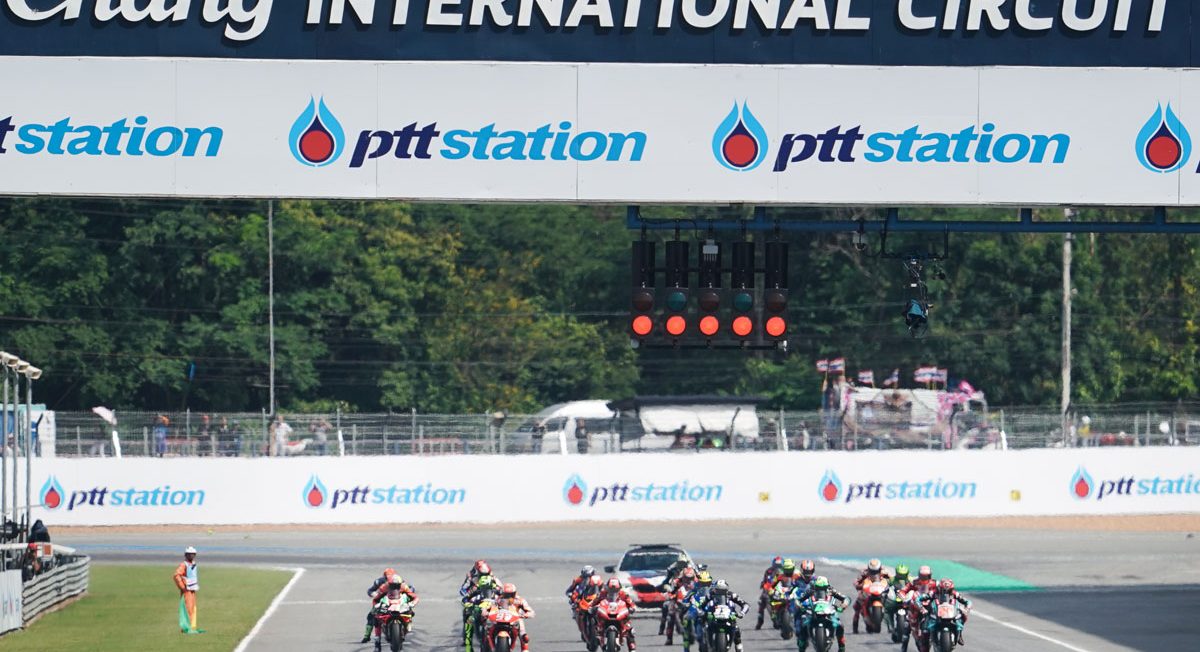 A taste of Thai

It is one of the smallest provincial capitals in Thailand and the first of four flyaway races on the MotoGP world tour. Situated parallel to well-known tourist territory, Buriram is one of the most primitive towns we have visited this year. The communities, the cuisine and the atmosphere is completely unfiltered. The Chang International circuit was awarded ‘The Best Grand Prix of 2018’ in its very first year and last weekend we witnessed the historical last stop in Marc Marquez’s World Championship campaign. But why Buriram? How did we end up in this tiny topical region with the best of the best on two wheels competing before our eyes?

Buriram (บุรีรัมย์) loosely translated to ‘the city of peace’, is home to 30,000 residents who live in a minimalistic environment. The people are some of the kindest and most inviting you will meet. However, that does not mean things are simple. The roads are chaotic with scooters diverging in and out of traffic and crossings are a free-for-all battle. Streets are scattered with food stalls concocting native noodle dishes, and strong aromas dance within your nostrils as you journey past live train lines and onto another street of pandemonium. You could peer into a building and see children laying on mats as the sun finishes its day shift or you could look the other way and see a fancy modern hotel waiting the arrival of the much needed tourists that fuel their existence. Much of the land is sprinkled with ancient ruins of the Khmer Empire, one of the most powerful states in South East Asia which ended in 1432 CE. This authority covered areas that we know now as Cambodia, Thailand, Laos and Southern Vietnam. It is a five-hour journey from the capital city of Bangkok and as of 2014 with the debut of the Japanese GT Series, locals believe this one of the best cities for sporting events. This element has become essential in driving the Thai economy with majority of it coming from local agriculture and tourism. MotoGP, World Superbikes, football and other series like the Porsche Carrera Cup Asia have become lifelines in a long journey to create a stronger, well established society.

Wealthy politician, former cabinet minister and now owner of the circuit, Newin Chidchob, set out to build a city that centred on their rural heritage and embellish it with top class sporting events to attract tourism to the North East of Thailand. How else do you get hundreds of foreign people to venture five hours inland to an area you know so little about? But to achieve this Chidchob hired well known German engineer, racing driver and circuit designer Hermann Tilke to design a motorsport track that would reach FIA and FIM standards and ultimately allow as much race viewing as possible. The grandstands would cater to a total of 100,000 spectators each day and this year on Sunday, not a seat was vacant. This though, is only one part of the bigger picture. With large floodlight features installed up to FIA standards, a bid to potentially host the Formula One World Championship is on the cards as well as hopes for a nighttime race. If that wasn’t enough, alterations are constantly being made to cater to different crowds and this year gradient areas were integrated to help give better access to people with disabilities. The idea is to consistently raise the standard to support tourists and keep this quirky race on the calendar.

In its first season the track had the highest attendance across the nineteen rounds with a total of 222,535 spectators over the three days and on Sunday the 6th October 2019, it became a historic landmark for Marc Marquez’s eighth crown: two important facts that could help inspire further World Championship rounds in this part of the world. It is one of the smallest towns in Thailand and yet it has managed to stage such significant moments for MotoGP in only its first two years. Plus, it brings in the fans who just love the sport and motorcycling..

The Thai Grand Prix gave one of the most diverse cultural shocks of the year but also one of the most welcoming. You go to countries like Spain and Italy where bike culture is substantial, but then you come to a completely foreign place like Buriram where the way of life and the environment is completely different and realise just how similar we all are even when we come from different ends of the earth. Much like Europe, these people adore the riders, motorbikes and manufacturers. It is the first race in a long time where I have heard Valentino Rossi fans from his offical fan club stand, cheer for Marquez and show genuine support as he rode to his title celebration. Although the mosquitos are too plentiful to count and the streets some of the hardest to navigate, it feels like a very appropriate of the world to share this spectacular show with.