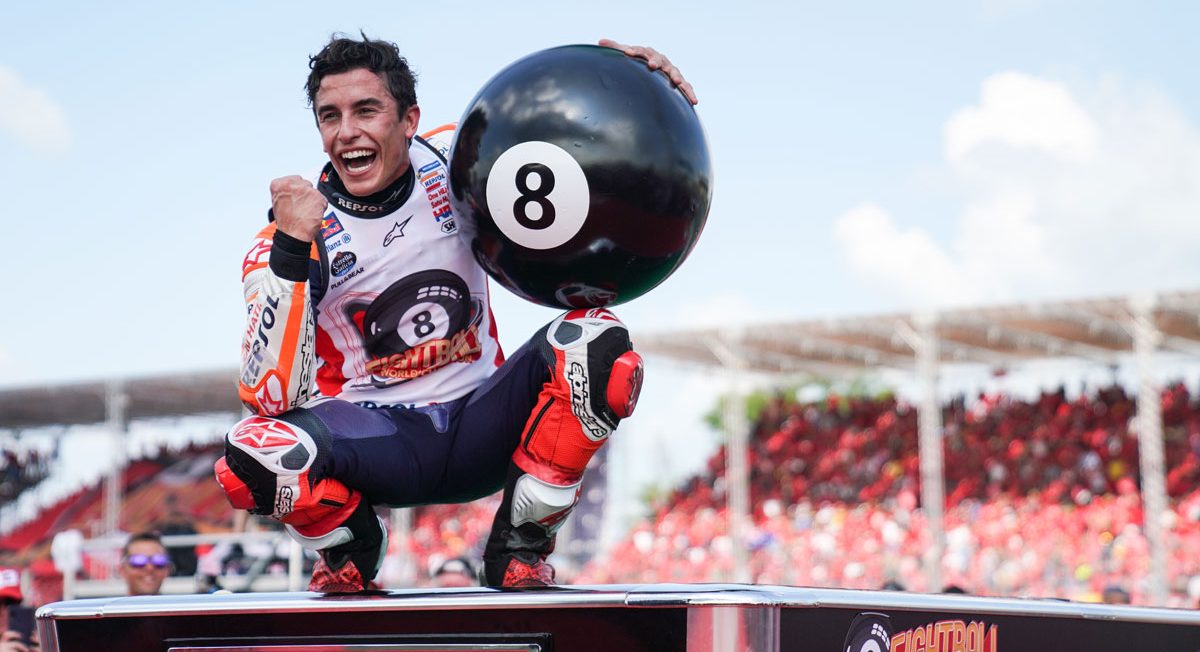 Grin and bear it

As the champagne sprayed, the confetti settled and an inflatable ‘8-ball’ bounced around a jubilant Repsol Honda garage on Sunday afternoon, the question was floated: where does the 2019 MotoGP crown rank among Marc Marquez’s greatest feats? Statistically speaking, the past 15 race weekends have not quite scaled the heights of 2014. Then the baby-faced 21-year old amassed a points haul of 362 and 13 wins, ten of which came in a devastating back-to-back blitz lasting from March to August.

But Marquez has time to equal that win tally and surpass the points total comfortably in the four races that remain. The MotoGP landscape has also since changed in the past five years. As the now eight-time world champion put it, “there was a big difference between level of manufacturers, level of bikes [in 2014]. Now we’re in a very competitive category with four different manufacturers who can fight for a victory in [any] race.”

Make no mistake; this is his best yet. And among the year’s most incredible statistics – like the one concerning the five races Marquez finished second, in which his combined losing margin was just 5.1 seconds; or the fact that Repsol Honda could yet beat Ducati in the team’s championship when his team-mate has contributed just 23 points – 2019 brought other facets of his make up to the fore: toughness, physical resilience and grit.

And that’s not only because of Sunday’s feats, when, in punishing tropical heat, Marquez chased down, measured up and defeated Fabio Quartararo just two days on from a high-side so big he was flung at the ground at a force of 24.1g.

So much of 2019’s success – nine victories, nine poles and five further podiums – stemmed from an unerring drive over the winter months to overcome a left shoulder injury that was so chronic it popped out as Scott Redding congratulated him on his previous title success last October. “This was very, very hard, very tough,” Marquez said on Sunday. “The doctors said this injury would be three or four months [of recovery]. I didn’t believe them. I said, ‘OK, one month and I’ll be ready.’ But step by step it was longer, longer, longer…”

It now seems like a trick of the mind to recall the severity of the state of the shoulder back then, when questions hung over the length of the rehabilitation period, warranting concerns over whether the joint could survive those regular thuds against the tarmac during this campaign.

After a qualifying crash at Valencia dislocated the joint again last November, I spoke to a physio involved in the sport. “With how often it’s happening, his shoulder will be f***ed,” was the blunt diagnosis. When Marquez eventually went under the knife on 4th December Doctor Xavier Mir “basically did two surgeries in one,” inserting a bone damper at the front of the joint, before repairing and rebuilding the ligaments at the back. “I almost don’t understand how he won the World Championship like this,” Mir said later that day.

A recovery period of 20 weeks was given. Carlos Garcia, a physiotherapist working for the Clinica Mobile, the clinic that accompanies MotoGP around the world, has worked closely with Marquez from 2017. The world champion decided it’d be best if Garcia moved to Cervera, Marquez’s hometown, in December and January to oversee the rehabilitation.

At that point, the #93 could have been forgiven for wanting some downtime to recover energy after an exhausting schedule while reflecting on yet another monumental season. But there were just five days between last year’s final official test at Jerez and a date with the doctor. And Marquez’s mind was already using his recovery as a kind of motivator to hone his focus on the following year.

“Usually he starts to think about the new season on the 1st of January,” Garcia told me in Thailand. “[Then he says,] ‘I’m not a world champion. I have to go out and win again.’ But this year he thought about 2019 on the 4th of December. When he did the operation, he was already thinking, ‘2019 starts now.’

“We made a full recovery plan. Our target was to arrive at the Qatar race in the best shape possible. I went to Cervera to live with him, as well as Alex. We did the whole preseason together. It was a different preseason for Marc this year. We had to work many, many hours, sometimes starting at six in the morning.”

With Garcia close by, Marquez went through four hours of physio a day for two months. Only four days – Christmas Eve, Christmas Day, New Years Eve and New Years Day – were taken off as a holiday. Most difficult of all, there could be no training aboard a motorcycle, leading the 26-year old to describe it as “the most boring winter of my life,” in January.

Bored he may have been but his focus never relented. “To be honest I expected everything from Marc,” said Garcia. “When you work with him you understand how big, how strong he is. I mean, his head, [his mentality] is fantastic. He is always focussed on the target, from the first day until the last one.

“He always keeps going, keeps going. In some bad moments when the rehabilitation was not in line [with where it should have been] he kept saying, ‘OK, we can do it.’ Our main target was to arrive at the Qatar Grand Prix in the best condition. We worked for that.”

The temptation for Marquez to return before he was ready was never far away. But Garcia, the Repsol Honda team and world champ’s family had concocted a plan to ensure the rider couldn’t put his recovery in peril prior to 2019’s first test. “We spoke to his mechanics and his parents. We said, ‘Marc needs to be calm so what can we do?’

“We knew there would be bikes around, that his brother and Jose Luis [Martinez – Marc’s personal assistant and former Spanish motocross champion] would be doing races. He would be in this environment with people doing the same things, but he [couldn’t ride].

“So we decided to take the wheels off his bikes. Like this he knew the bike was not ready. One time he arrived at the dirt track saying, ‘I think I’m ready.’ His father said, ‘Sorry, but your bike isn’t ready.’

“Some days we did some rehabilitation at 6am and also 11pm because in the middle of the day we went to see his brother and Jose Luis make a motocross race. For him that was really important. He wanted to do the rehab early so he could go and see the races, to be a coach for them, to be close to the action and have the feeling of being useful.”

One day on a go-kart and another on a minimoto bike were his only on-track experiences prior to Sepang, where he posted the fastest time on day one. Needless to say, he was well ahead of schedule.

“From a biological point of view to be back to a normal condition it takes six months [after the operation],” said Doctor Michele Zasa, head of the Clinica Mobile, earlier this year. “But common people would have probably needed two to three months just to be able to do their normal daily life, which is not going on the bike at 300kph.”

Gradually Marquez regained feeling. A crash on the final day of testing at Qatar had no serious after-effects. “Then,” recalled Garcia, “when he finished the [first] race so close to the victory, we said, ‘OK, we’re doing a good job.’ He could take a breath, understand that everything was in the same way as last year. When he improved his physical status, he’d get better and better.”

Only at Jerez, after dominating proceedings in Argentina by 9 seconds, had he regained the full fitness needed to ride a MotoGP machine. “There we achieved the target. When we planned the recovery we thought he should start the European season at 100 percent on the bike. But not for the normal life, or normal things. For the normal life without pain, I think [it was only] after the summer break the shoulder was not a problem.”

Marc’s brother Alex agreed it took until the summer for Marquez to move as freely on the bike as he wanted. “In the first races he was fast and competitive but still had some problems. It depended on the weather. You know, after the operation you feel the change of humidity and these things. Also it depended on the track. When there were more left turns he had more problems. In changes of direction and left corners he was with, not pain, but he felt something there.”

Not that you’d know from his results. In that period Marquez’s finishing record read: 2nd, 1st, DNF, 1st, 1st, 2nd, 1st, 2nd, 1st. He appeared personally affronted when asked about the injury after the Grand Prix of the Americas in April. To put it simply, he plays any pain down. And last weekend in Buriram showed he has an immense capacity to block that out. “Just concentrate and forget” was how he explained his ability to lead Friday’s second session from the start, less than three hours after the FP1 fall.

This hasn’t been lost on Andrea Dovizioso, Marquez’s principle rival over the past three years. “There are two types of rider,” said the Italian. “Most of the riders put the limit in front of everybody and play on that. So they speak always, ‘I have this [injury], I have this, I have this.’ Some do the opposite – they don’t show the limit and they [still] push at 100 percent. Marc is one of them.”

Just another facet of his character to overcome, along with his supernatural feel for the front tyre, adaptability to changing conditions, relentless drive and team ethic. Little wonder Valentino Rossi was talking about the possibility of Marquez surpassing his own nine titles in the coming years as though it were a mere formality. If an injury of that severity couldn’t disrupt his relentless march forward then – let’s be frank – what can?

There’s a reason HRC technical chief Takeo Yokoyama would later describe him as “somebody from a different planet.” 2019 will surely be remembered as the year Marquez upped the ante off the track as much as he did on it.