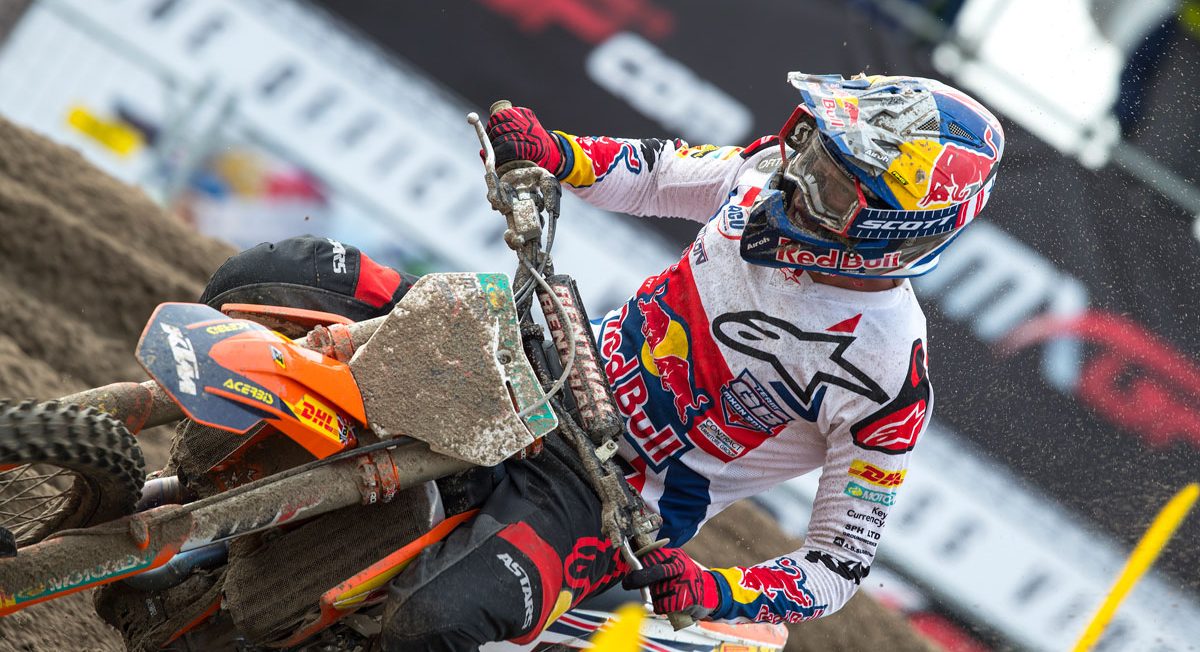 “I expected to feel like a fish out of water”

Among the narratives to flow out of the soaked Assen sand last weekend was the great story of Team Great Britain’s third consecutive podium finish. It was just the second time the country had mounted the Motocross of Nations rostrum in that three year spell (in 2018 they were elevated to third place after Team Italy’s penalisation for a fuel rule infringement) and it was somehow against the odds after two of the original three riders selected for the team – Max Anstie and Ben Watson – were counted-out through injury.

MX2 replacement Adam Sterry had to cope with the nerves and pressure of being a debutant in what was his last international FIM race on a 250, Shaun Simpson was the first ever MXGP winner at Assen in 2015 but had suffered one of the worst GP spells of his career in terms of results in the last two months and Nathan Watson had to fill Anstie’s shoes: a rider who had won a moto so brilliantly in the sand of Lommel in the summer.

In Watson’s case a British team berth meant he was also a rookie to the scope and spotlight of the MXoN and the biggest fixture of the year but he was also a very capable sand rider; a winner of the massive Enduropale Le Touquet beach race in 2019 no less. In 2015 he was taking top ten results in MXGP as the third man on the Rockstar Energy IceOne Husqvarna team at a time when similar competitors his age were just learning the tricks of the MX2 class. Finding his opportunities limited for 2016 he took an offer to join Red Bull KTM’s factory enduro team and negotiate the varying contests and championships inside the discipline.

The weekend before Assen Watson was winning his home round of the WESS series at Hawkstone Park. Then he was thrust back into motocross. Casual fans may have been sceptical of an enduro athlete taking a place among the selected best riders from over thirty nations but aside from Watson’s credentials there was also the precedent set by Christophe Charlier – another former GP racer – who helped Team France to their triumph at the 2017 edition in the UK.

You’ve haven’t stopped smiling it seems but talk about the emotion tackling this race. There are quite a few subplots: your MXGP past, racing the GP here in 2015, your brother’s connection, Charlier’s results as an enduro rider in 2017…

I was so happy when they called-me-up but it felt normal coming here: that was strange for me. I thought I’d be very nervous and like a fish out of water but it felt like I was only here yesterday in MXGP. I think I’ve been pretty chilled about it and I also really wanted to do it, so I think that helped. If they’d called me up unawares then it might have been a different situation but the truth is that as soon as I heard Assen would have the Nations I was thinking and prepping…just in case they might want to pick me. Just in case.

I just did more. Ever since I stopped GPs I still always rode a lot. Even on my enduro bike a lot of my training is motocross-based. We had quite a big summer break in Enduro so I was out even more. I rode an International in Belgium and came out here to ride more tracks. I wasn’t bad; I was often lapping faster than some GP guys. I thought ‘I’m doing OK’ but racing is – somehow – a completely different thing and that feeling is something you lose if you are not doing it every weekend. This weekend was a bit special; it is not your typical motocross race.

Getting used to that race environment: was it like putting on an old pair of shoes?

Yeah, and because I’m doing all these three hour races and endurance-type stuff I expected to come back to a thirty minute moto and it would be a bit of a walk in the park. You forget how tough motocross really is until you get back into a race, even these little 20 minute qualifying heats. It is flat-out every lap with people hanging off your back wheel all the time. The pressure and your heart rate is racing-up. It takes its toll. It’s strange but I find a thirty minute motocross race harder than a three hour beach race.

Using the metal start gate must also be something new for you. MXGP needed a winter and half a season to transition into it…

I had to get my head around it quickly because when I raced MXGP it wasn’t there. It was just a normal dirt gate. I’d done two starts on a mesh gate before this week. I spent a few days with some guys that knew what they were doing and they taught me the basics. I got it quite quickly, and was making some decent starts again. Adam and Shaun and those guys are doing it every weekend and their bikes are ready for it. I couldn’t go out there and expect a holeshot but I could still hope for something good.

The popular opinion is that you dipped out of MXGP way-too early to move to enduro. What emotions have been stirred by coming back here and being in an awning like this next to world champions?

It’s been surreal to be honest. Coming here and being in this awning is a great opportunity. Like I said, it doesn’t feel strange but there are thoughts like ‘what if? what if?’ in the back of my mind. Do I regret leaving? I’ve had a great career in enduro but my heart has always been in motocross and it’s what I’ve done ever since I was a little kid. My Dad did it and my brother still does. I miss it to be perfectly honest. But I’m also happy in the situation I’m in. I’m still riding my bike as a job and I’m happy with that.

When you break it down to basics what gives you the buzz about riding motocross and what’s the equivalent in enduro?

Putting together a decent lap. I love the free practices and timed qualifying and stuff like that because it is about raw speed and you always want to go as fast as you can against all these massive names. Then, obviously, the racing. When you’re out there and battling then you’re not thinking but afterwards you look back are you’re like ‘that was so good…’ You also kick yourself a bit and think ‘why didn’t I do this-or that better?’ It is like an addiction, and you always want to come back to try and get better. In enduro you can’t quite get that same feeling as winning a race because a lot of the time you are riding on your own and it’s on times. You’ll come to the end of your test, look at the times and say ‘Oh! I’ve won the day’. It is not like crossing a finish line first. It is a completely different thing. In enduro you have to be so precise because you only have one chance and a result can come down to seconds or milliseconds through a long day. I think it has really improved my riding and I’ve only become better as a result of changing to enduro. You have to do everything perfectly. In motocross you can make a mistake or have a bad lap and still be able to recover from it. In enduro a mistake can be the difference between winning and losing the day.

Seats, especially factory rides, are premium in MXGP. As a Red Bull KTM rider in enduro I guess you’d need something at a good/high level to consider a racing return here?

Absolutely. It’d have to be a factory ride, and I’ve heard that it is so difficult to get something like that in this paddock, which is a real shame because there are so many good and talented riders out there that are struggling to get the bikes. Now they [bikes] are so good at a factory level and it is the machine that will make the difference in the starts and all the different tracks. It’s a tough sport!