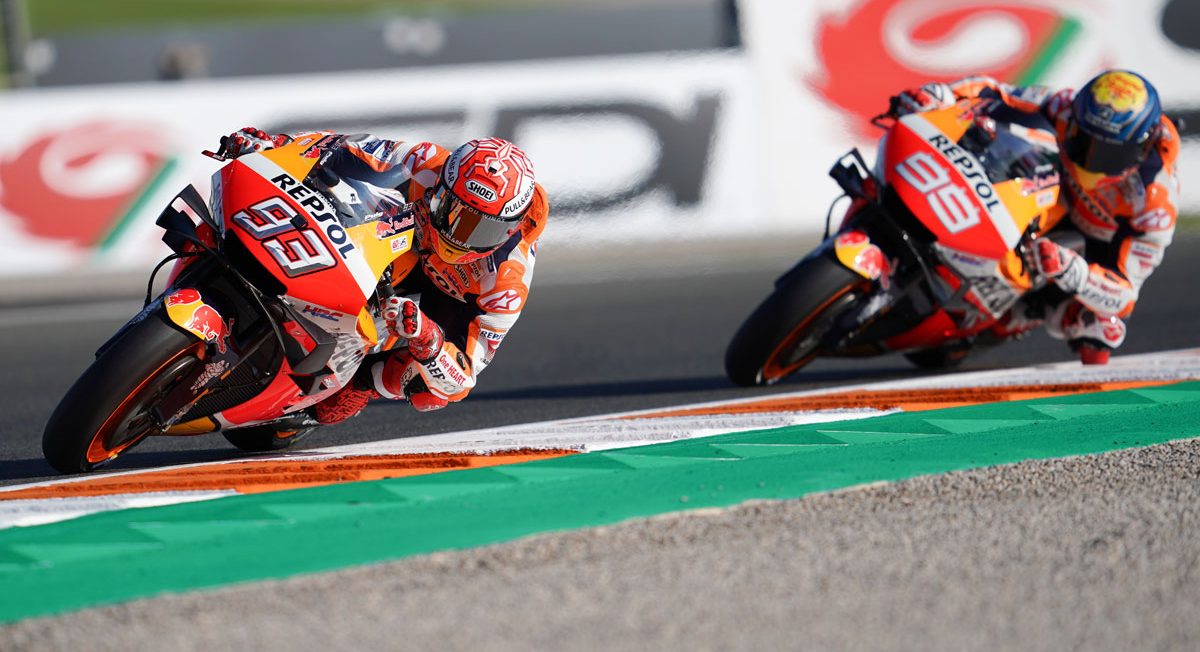 So long, Jorge. Not long after Jorge Lorenzo had announced his departure from the sport, one’s attention turned to the fallout. Just as well there was so much goodwill for a man who won five world titles and delivered a sincere, well-reasoned retirement pitch with such clear-eyed clarity.

As – and I don’t want to be a party pooper here, Jorge – you didn’t half leave one hell of a mess in your wake. That’s said in jest, of course. Retirement at this moment was the right decision. End of. Going off Jorge’s words on Sunday – his aim for his final race was solely to avoid crashing and sustaining injury, rather than finish as high as possible – told us of the internal ordeal he has faced before each race since returning from that frightening accident at Assen in June.

But Lorenzo’s announcement set off a chain of events few could have foreseen and ensured any weary journo – not me, dear reader, not me – hoping for a nice, quiet weekend to end an exhausting two month slog of seven races in nine weekends were deprived of much needed slumber for at least four more nights. The horror!

At first, we naively thought the seat was Johann Zarco’s for the taking. He almost said as much on Thursday, smiling like a Cheshire cat and speaking of his relief at being nailed-on for a 2020 seat with Honda in one seat or the other. Drafted in to the LCR garage for the final three races, we were led to believe the double Moto2 champion was performing some kind of late-season pantomime audition for Jorge’s seat.

Repsol team boss Alberto Puig did spend a lot of his weekend at Sepang in Zarco’s box, observing the Frenchman’s comments and body language with the kind of intensity a suspicious father usually reserves for his daughter’s first crush. The fact Zarco didn’t begin sweating and blubbing there and then demonstrated his suitability to the paddock’s top seat to the watching world.

But it soon became clear that Zarco’s comments were smeared in naivety, too. Puig is no mug and remains close friends with Mike Leitner, Dani Pedrosa’s ex-crew chief and current team boss of Red Bull KTM. This paddock has a long memory and anyone thinking the double world champion’s sulky behaviour in the year’s first eight months would just be brushed under the carpet was mistaken.

Aleix Espargaro, brother of Pol, a member privy to the in-garage tantrums that were commonplace down at factory KTM in the early part of 2019, showed just that. “The attitude he showed this year, for me is not a professional attitude,” opined the Catalan. “A lot of people behind us with a lot of families are working very hard. A lot of people are putting a lot of money into the projects. So to stop and say, ‘this bike is shit, I go home’ – for me, he doesn’t deserve to go to the best bike and best team in the world.”

And so it proved. But what of the other candidates? Cal Crutchlow has been a tremendous servant to Honda. Bringing recent experience of Yamaha and Ducati machinery, he has been a diligent tester. His ability to provide HRC technicians with ‘normal’ feedback – in other words someone that isn’t Marc Marquez – is greatly valued. Results haven’t been bad, either, with the Englishman chipping in with three wins and nine further podiums across the past four years.

But Crutchlow has always been one of Monster Energy’s leading athletes, and proudly so. Changing over to the heavily Red Bull-backed factory squad would have been an issue. There is also the small matter of the 33-year old’s aversion to saying what he thinks. And while largely watching what he says in recent years, Cal occasionally speaks out on factory decisions that are not to his liking.

I can recall two occasions in the past 14 months when members of the factory’s communication department have asked me to check whether he had made the comment that later appeared as an incendiary headline on a particular website. When I informed them that he had, the reaction was a withdrawn shaking of the head. That outspoken nature doesn’t swing with top factory bosses.

Then there was Takaaki Nakagami. The softly-spoken 26-year old was present in Valencia, sporting a brace on his recovering right shoulder and a wide-eyed look when it was put to him that he was in the running for the seat Lorenzo was about to part. His nationality counts for a lot. But no matter how impressive Nakagami’s progression prior to the unfortunate Assen crash that would derail his season, he is still a rider with a single best finish of fifth to speak of – still some way off elite level.

Step forward Alex Marquez. Fresh from becoming the only rider in history to win titles in Moto3 and Moto2, his name represented one of two avenues Repsol Honda could follow. Those were, according to older brother Marc, “take somebody with more experience or give the opportunity to some young rider.” It was interesting that MotoGP’s current ‘untouchable’ should air this belief in public. Despite protestations to the contrary, it’s unlikely he had little say in the matter.

On the face of it, Alex’s appointment could be viewed as nepotism. Promoting one brother to placate the other at a time when contracts for 2021 are being readied, presented and negotiated might sit uneasily with some.

But what else could Honda do if Marc was pushing for Alex? After a year like 2019, when Honda retained its ‘Triple Crown’ despite its three other riders finishing 9th, 13th and 19th in the championship, it would represent negligence on their part to upset their star man at this crucial stage of the negotiation process.

And the latest rider to succeed in Moto2 is no dead ringer; in fact Alex’s recent campaign underlined his depths of resilience. Written off in so many quarters – here included – as a habitual crasher, unable to juggle the weight of expectation that comes with carrying his surname, he was everything some thought he could never be: devastatingly fast and consistent. Let’s face it: nobody could hold a candle to Alex in the second race of the day from May to August. Even as Brad Binder applied furious pressure in recent months, he avoided disaster and brought it home.

In many respects, his move to Repsol is one racked with pitfalls. As he has already found, the Honda is no easy machine to manhandle. There will be constant comparisons to his older brother, who barring a freak of nature will be fighting for title number nine. And there are a host of people already expecting him to fail (Tuesday morning’s testing fall was greeted with snide looks of ‘told you so’).

But this year Alex has shown he is capable of blocking all of that out. He has forged his own path as his own man. In most years a Moto2 title is enough to warrant one of the top saddles so why should this be any different? How he shrugged off his early Tuesday mishap to enjoy a positive first test was indicative of his recent change.

All the better if it keeps the other side of the box happy. One thing’s for sure: at this moment Honda must to everything in its power to avoid letting Marc slip through its grasp.