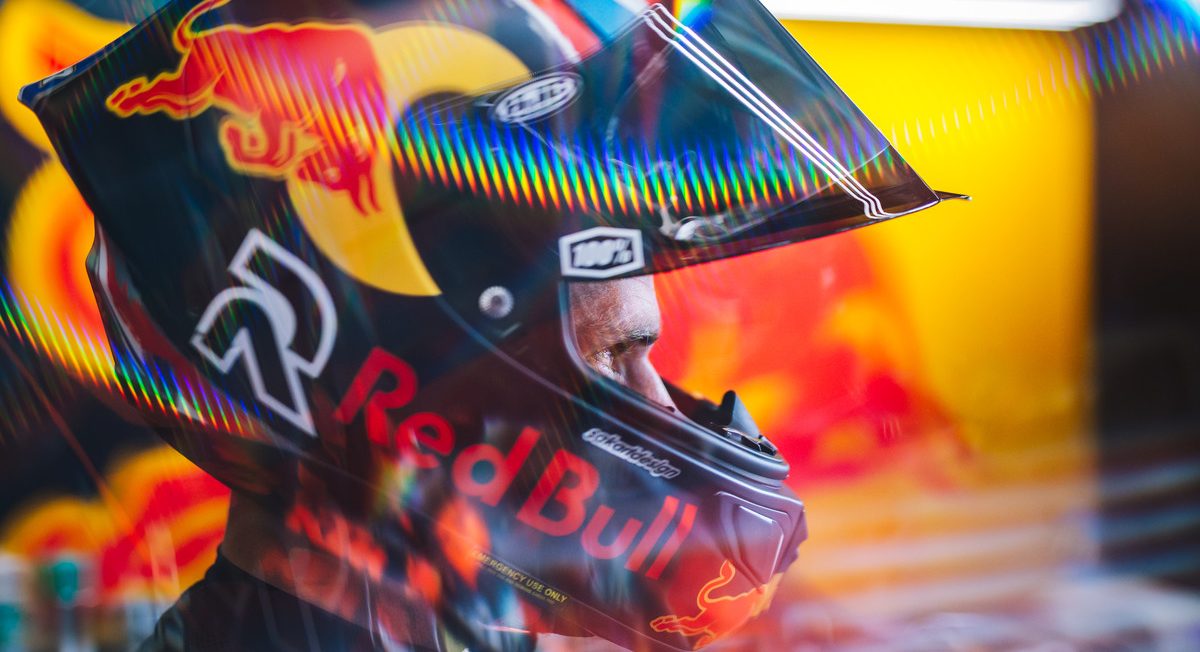 I was convinced that Brad Binder would reach the very top from one morning in April, 2017. The-then 21-year old had endured a ‘mare of an off-season, spending his time in operating theatres, hospital wards and on his sofa when he ought to have been celebrating a Moto3 title triumph in bars and nightclubs in his native South Africa.

A high-side while testing at Valencia in November 2016 resulted in his 135kg Moto2 machine landing on his left arm. A fracture-dislocation of the forearm was the result. But it wasn’t done there. The bone failed to knit after the first operation, meaning he soon went under the knife again. The arm was plated for a second time and a bone graft was required to aid growth.

Still it wasn’t right. Coming to Argentina for his second race as a Moto2 rookie, Binder was in some pain. A high-speed wobble during qualifying only heightened that. He awoke on Sunday to find the arm swollen and throbbing. An x-ray at the track confirmed it had broken once more. He was penciled in for a third operation in five months (“the third f**king time already”). But there was still the small matter of racing left.

Understandably the Red Bull KTM Ajo team had their concerns. Was it really wise to allow a rider with such an injury race amidst the Moto2 maelstrom, they asked. But Binder had made up his mind. “I just said, ‘Thank you very much. I’m going to get ready for warm-up!’ I think that made them understand I would be OK.” He rode to ninth place, an astonishing feat when you think 16 men behind him had the luxury of two working arms.

I caught him afterwards as he was discussing possible operation dates with Aki Ajo. Holding a bag of ice to the arm he was so calm and to the point you wouldn’t have registered he was injured at all. When I asked how he had summoned the strength-of-mind to fight from 24th on the grid he said it was the thoughts of boredom that come during recovery that spurred him on. “I really wanted to dig deep before sitting on the couch for another month and a half.”

It’s moments like these that led KTM’s Motorsport Director Pit Beirer to say he is a rider “with two faces… the most gentle, easy guy you can have. But when it comes to the race he’s a fighter like there’s no tomorrow.” It was that same bloody-mindedness that took him to within three points of the Moto2 title last year aboard what was a dog of a chassis.

And most recently it’s what allowed him to win just his third ever race in MotoGP, an astonishing feat for a rider aboard a machine that had never finished higher than sixth in dry conditions, let alone win in such emphatic fashion.

Yes, track conditions at Brno last weekend bordered on the critical with bumps, a lack of grip and a major drop in rear tyre life catching many of the established names out. But some context here: It took Dani Pedrosa four attempts to win his first race in the premier class. Valentino Rossi needed nine bites at the cherry before tasting victory champagne, and Casey Stoner 18. All with far more established and decorated machinery. With this recent success Binder’s now on a par with Jorge Lorenzo (three) and just marginally behind Marc Marquez (two).

Understandably the upside-down nature of Sunday’s results may lead you to ponder whether we were witnessing a freak one-off or the arrival of a new MotoGP heavyweight. But speak to KTM and they’re of the impression this recent success was the first of many. “He’s still a prototype of a special racer. We love him,” Beirer has said.

With Pol Espargaro on course for a podium at the least and Miguel Oliveira showing top three pace, this was further confirmation KTM has taken an enormous step forward over the winter. The RC16 was always renowned for its front-end stability and braking prowess. But it struggled to hold a tight line. Adding oval shaped steel beam sections to its steel trellis frame has addressed that, the bike now turning on a sixpence.

Power was never a problem for the orange bikes. But its engine and electronics have moved on. How the RC16 puts its power down had Aleix Espargaro scratching his head after Brno. “The KTMs were on another level completely in terms of acceleration. I never saw something like that, even in Austria when Ducati was flying. Today the traction they had… When they overtook me, my feeling was that I was in Moto2.”

WP – KTM’s in-house suspension supplier – has also made huge strides after hiring Peter Bergvall, one of Ohlin’s leading race engineers in recent years, last August. And signing Dani Pedrosa at the end of 2018 to spend the majority of last year working on this year’s bike has proved to be one of the shrewdest bits of business in recent racing history.

This is where Binder comes in. In previous years he had ridden below par equipment, his years with Mahinda in Moto3 (2014) and KTM in Moto2 (2019) in particular. “It was tough, difficult,” he said of last year. “But by mid-season it made me a much better rider because there was nothing to leave on the table. Ever. (If I did) I was back in 12th place.”

It all clicked when he stepped onto KTM’s 2020 bike in Malaysia in February. “This bike is insane,” he told his mechanics. Soon his speed picked up. From 23rd and 22nd fastest at Valencia and Jerez last November, he was ninth quickest in Qatar. His aggression and late-braking prowess appear a perfect fit for KTM’s MotoGP machine. He had pace good enough to finish second in his debut race, a staggering performance that had us all blinking in disbelief.

It wasn’t just Binder’s performance at the Spanish Grand Prix that his boss in shock. “After the race he said, ‘Pit, I have the best bike out there. I can turn better than the others. I have the grip.’ We were like, ‘Wow’. Until the end of last year everybody told us our bike is absolutely ‘not there’. Then the rookie told us we have the best one. That shows that if a rider believes he’s in the right place with the right bike and the bike is competitive, this takes so much doubt away and makes the rider so much stronger.”

Mark Lloyd is Binder’s chief mechanic and has been amazed by his rider’s speed over this past month. “You could see in Moto2 he was a quality rider. But MotoGP is a whole different kettle of fish with all the electronics, the carbon brakes, the power, the strategies… that’s a lot to take in. But he’s like a sponge. He sits down with the guys, we go through things. He’s very smart.

“(He’s) Humble, I’d say. He’s very easy going. He spends a lot of time with us after the sessions in the garage talking and chatting. Obviously he’s always looking to improve the bike. (During lockdown) All the team on our side of the garage kept in contact via Zoom. Tuesday nights were always kept for a chat with the rider and all our engineers to see how he was getting on. At the moment there are no faults at all.

“He hasn’t ridden another MotoGP. He had no misconceptions about another MotoGP bike. For example Pol, (Johann) Zarco and Bradley (Smith) all came from riding Yamahas. He has ridden KTMs and WP suspension all through his career and I think that was a massive help.”

And Lloyd is now looking at the races ahead as a chance to kick on. “People are expecting us to do well in Austria because Dani’s tested there. Why not? We went to Jerez, one of the most difficult tracks out there. It was 38 degrees ambient (temperature) and 60 degrees track. We had race winning pace. We came to Brno. It was bumpy, slippery and we could have had two KTMs on the podium.

“So why not? Let’s dream big. We’ve got an all-round package that can roll out of the truck and be on the pace. Let’s go, roll the dice and do well.”

An all-round package and a rider to boot. Binder is no doubt thinking the same. Jerez hinted at it. Brno proved it. And KTM has recently tested extensively at the Red Bull Ring and Misano, tracks that host the next four races. Don’t be shocked if the 25-year old has more surprises in store.