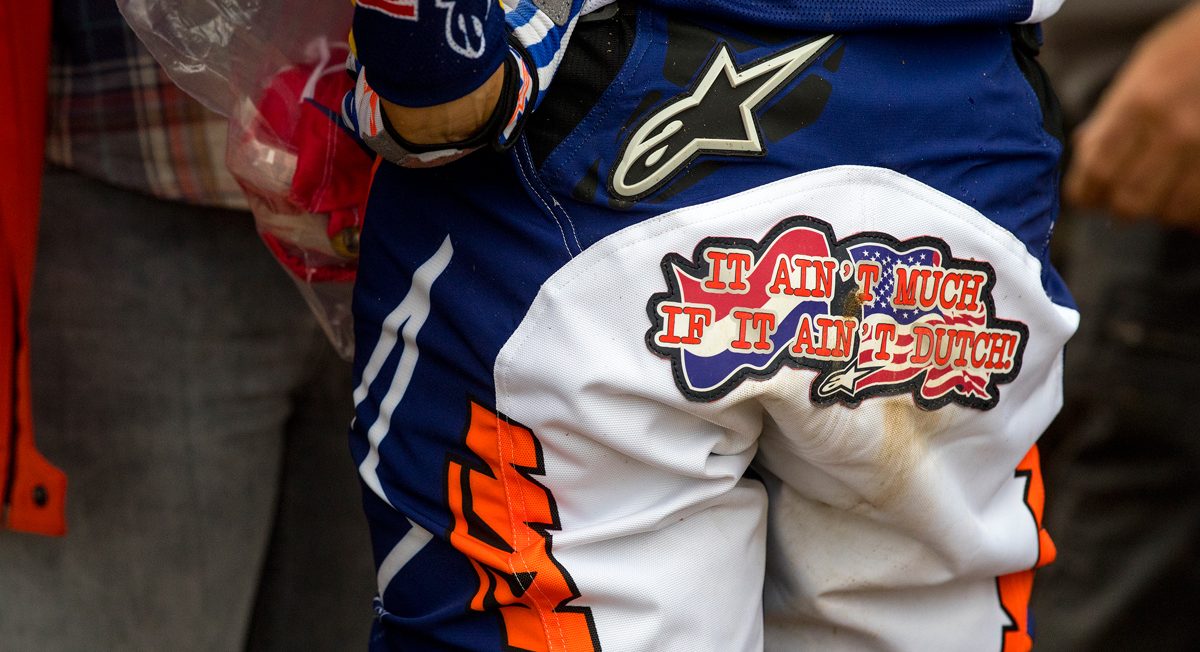 Those moving parts: Day Two at the Nations

Cairoli, Coldenhoff & Ferrandis at RedBud…but what else?
7th October 2018

Tony Cairoli, Glenn Coldenhoff and Dylan Ferrandis displayed suitable mastery of a RedBud course that had its fair quantity of sandy soil added to the layout (possibly to counter the effects of a poor weather forecast) but the real question many of the thousands of fans had on Saturday evening was: what on earth happened to Team USA? 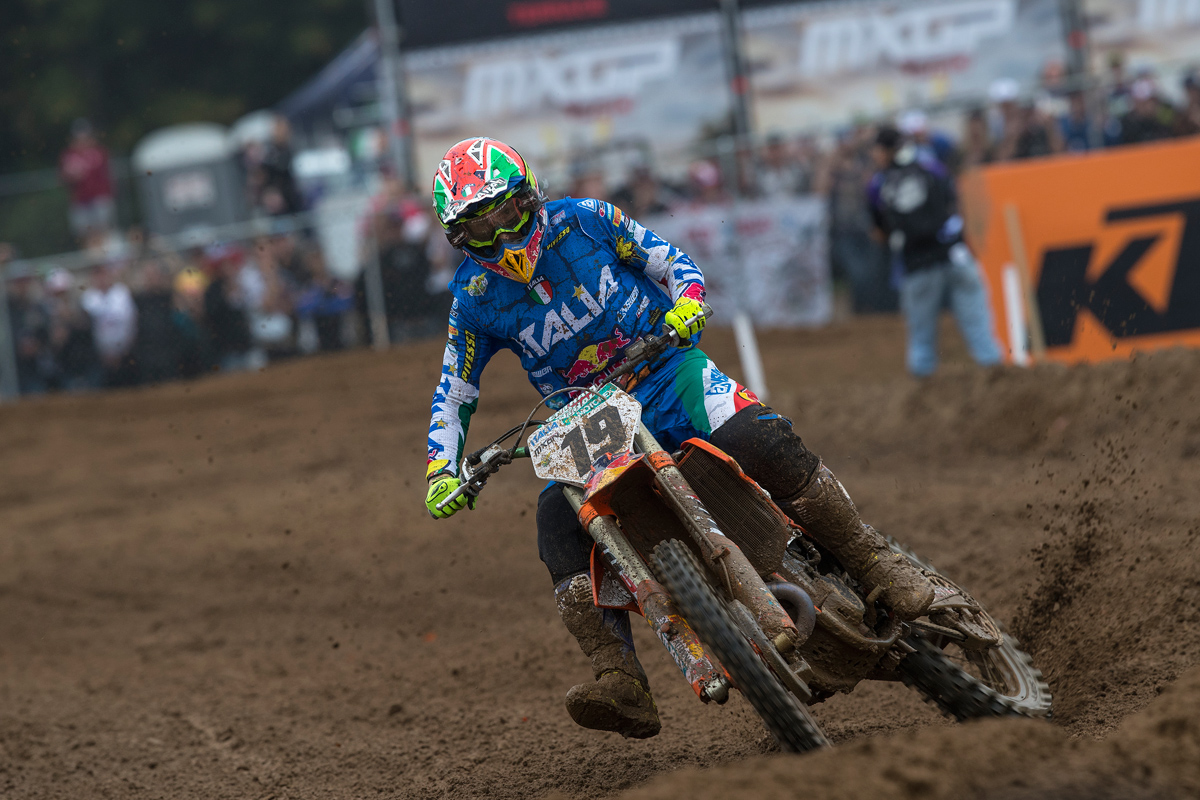 Cairoli escaped with the eagerly awaited MXGP Qualification race as world champion Jeffrey Herlings entered the first turn too quickly and crashed. The Dutchman zoomed into the pit for emergency repairs and exited last, whereupon he embarked on a chase that dragged him up past Gautier Paulin for an amazing third position on the final lap. At one point Herlings – who was the fastest rider in the shortened morning Free Practice session because of the wet – was two seconds a lap quicker than the rest of the field. Eli Tomac had been circulating in fifth place behind an impressive Tommy Searle (the Brit again looking like he can deliver the goods when the result really demands) but appeared to stall the Monster Energy Kawasaki and limped out of the Heat at mid-race distance with an engine glitch. 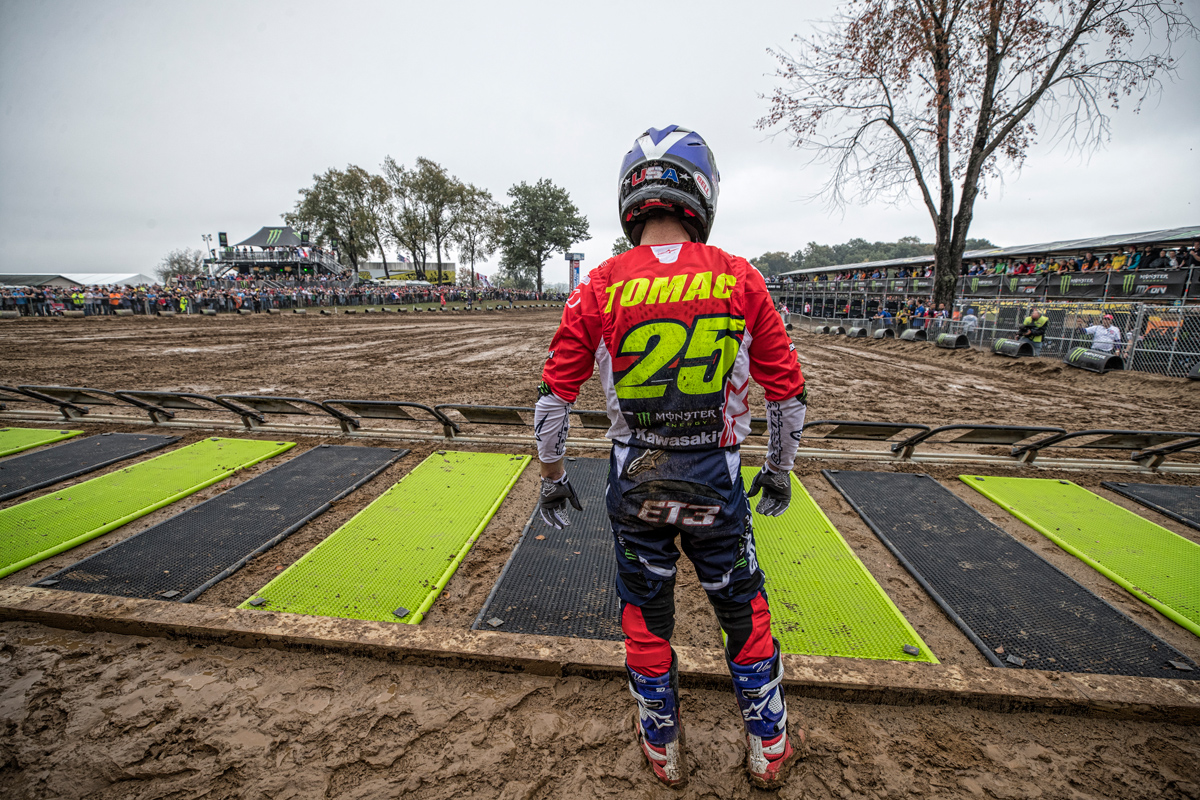 It was an air-sucking hit for the Americans and the crowd seemed slightly stunned. Tomac had been toiling behind Searle, although the importance of Saturday and taking risks for a higher qualifying slot is debatable. Ken Roczen, representing Germany for the first time since winning the MX2 class on home soil in 2013, had a lonely ride in second place but looked very comfortable for the most part. The other occurrence of note was a clash at the bottom of the hill between Clement Desalle and Valentin Guillod that left the Belgian with a broken water pipe and eventually forced his retirement as well. Credit to Jose Butron for getting out of the gate well on the Leopard Marchetti KTM and taking a surprising sixth. 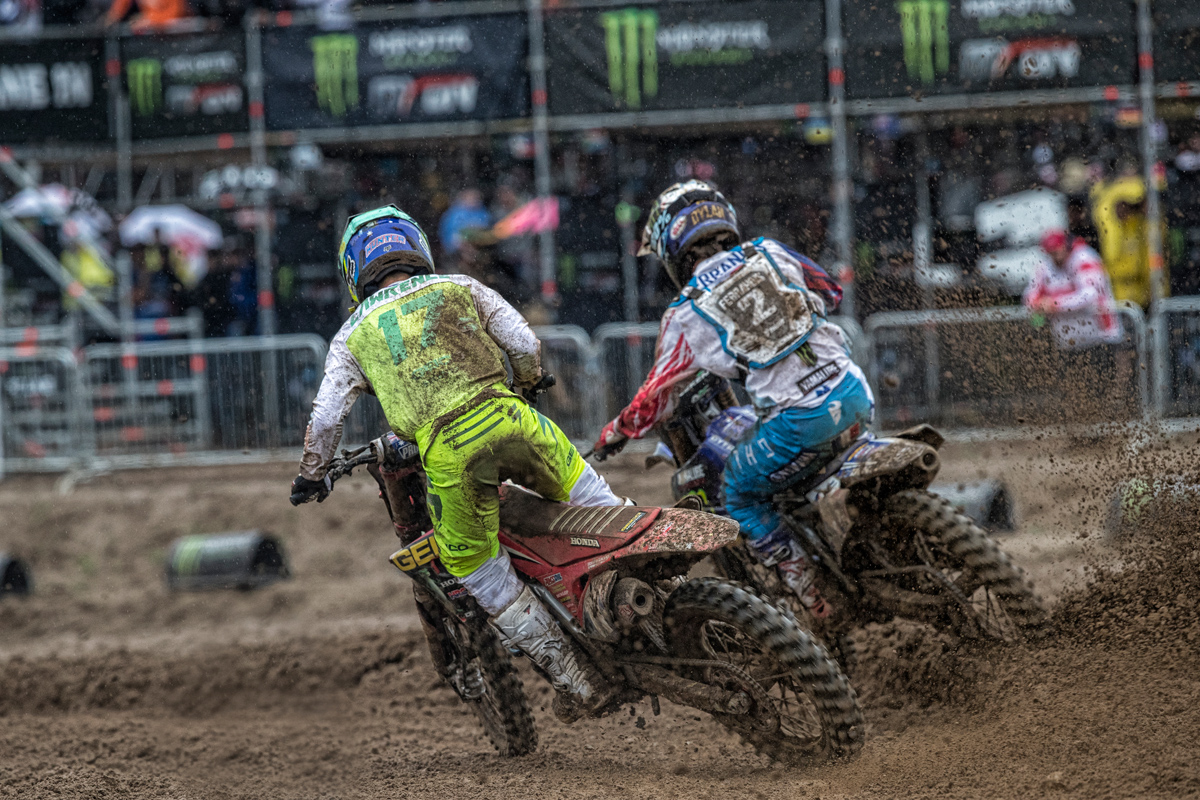 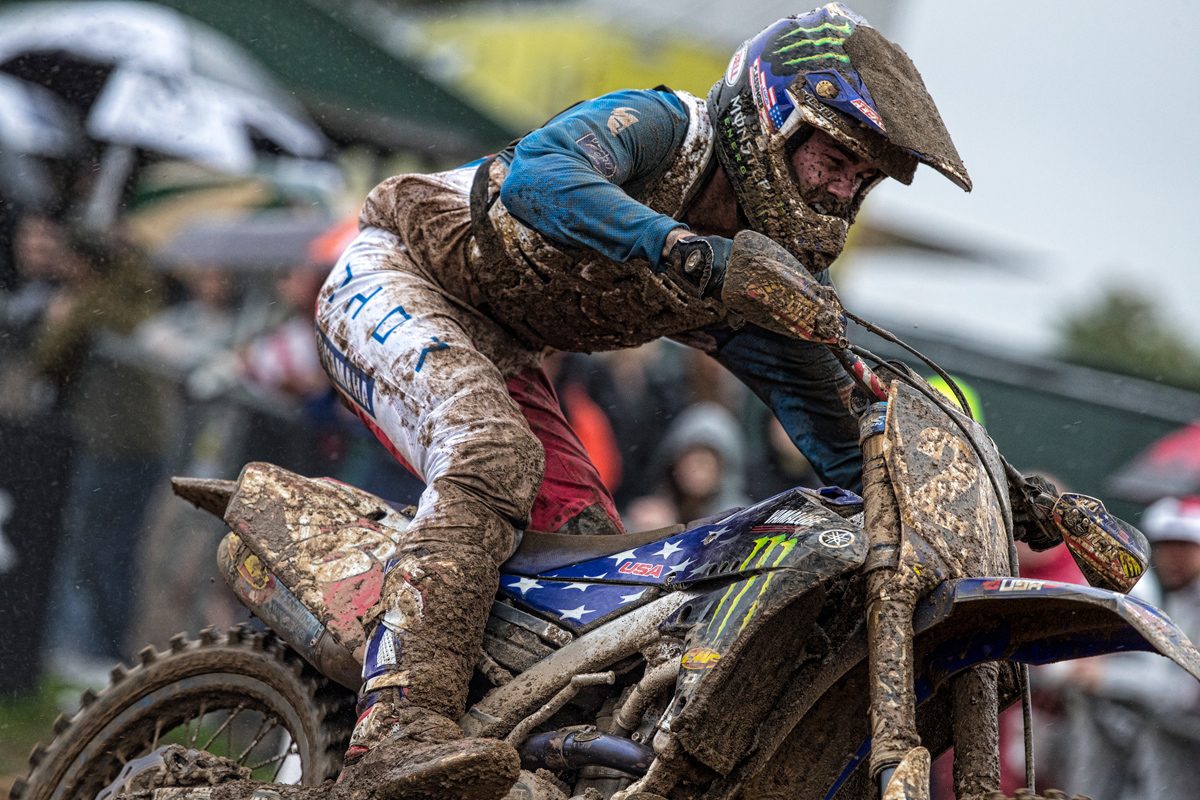 MX2 was up next and was the race of the day: the Star Yamahas of Aaron Plessinger and Dylan Ferrandis setting the pace with Hunter Lawrence in proximity once the trio had dealt with the bright starting Henry Jacobi. Plessinger perked up the atmosphere by leading for four of the eleven laps but miscued the step-up on the far side of the track, cased the landing and tumbled down the other side of the jump. The Team USA debutant curse seemed to strike again. Star are still using the older YZ250F models so it was weird to see the AMA Champion trying to kickstart the bike and he eventually re-joined to finish tenth, although there was word afterwards that he’d taken a knock to the head. World Champion Jorge Prado motored to a safe and steady fifth behind a lively Michele Cervellin for Italy and Team GBR’s Ben Watson was eighth after a poor start. Holland’s Calvin Vlaanderen was another one mired in the pack but his twelfth position filled the scratch result for the Dutch who captured an easy overall Pole Position.

That status was largely thanks to Glen Coldenhoff who led the MX Open chase from start to finish and remained error-free to deflect Justin Barcia; the American’s second spot was the saviour for Team USA and gave some breathing space. It does mean that the hosts enter the gate ninth tomorrow (behind Switzerland, the UK and Spain) and have learned the harsh lesson that mistake or misjudgement both on and off the track will badly crush an overall result.

Considering the speed of Herlings, the consistency of Coldenhoff – both riders feeling comfortable in the sandy texture of the terrain – and the knowledge that just one sufficient performance from Vlaanderen will seal the job then the Dutch have to be favourites for Sunday. All three athletes appeared in a press conference late in the afternoon announcing the 2019 Motocross of Nations at Assen next year and the prospect of riding with the 1, 2, 3 plates in front of their home crowd (a year after Herlings won the MXGP title at the same place and in full view of a packed attendance) was clearly tantalising. This weekend could be the Netherlands’ first win ever at the Nations and, coupled with Herlings’profile, might put the sport on a new level in their country in terms of awareness and potential. 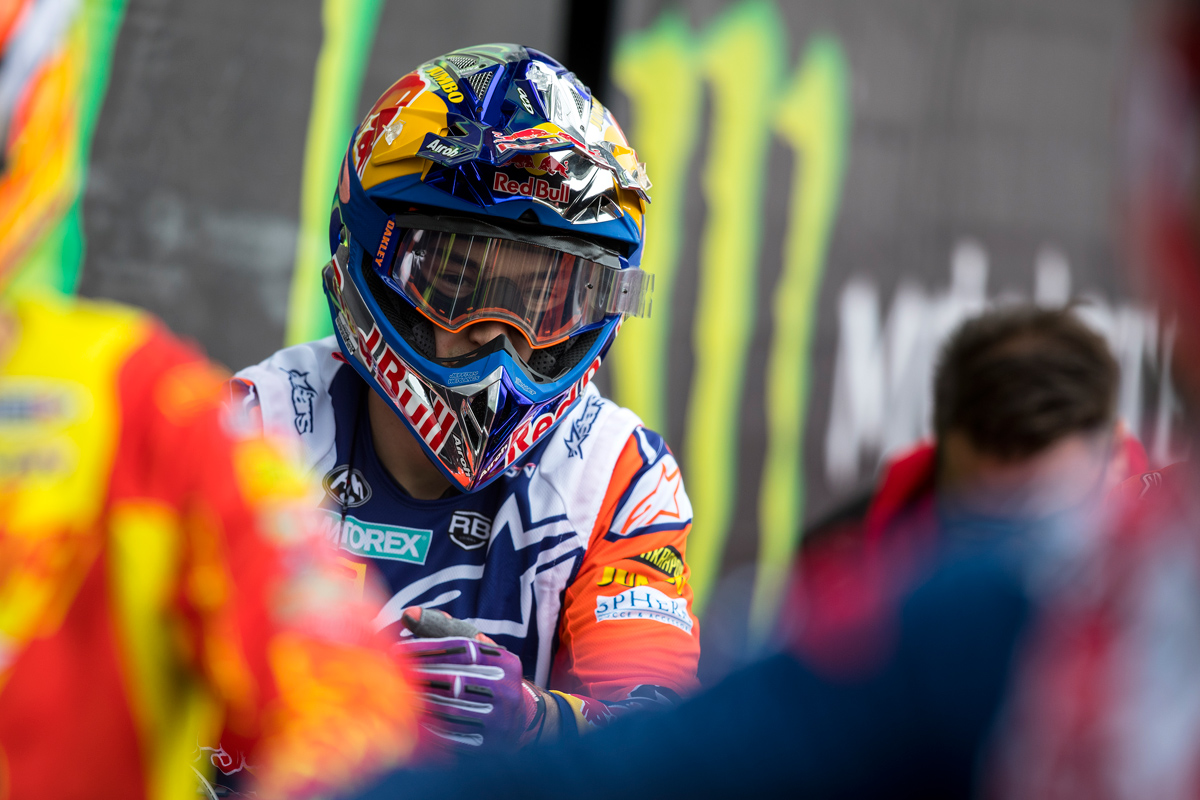 Orange aside, the reigning champions have two capable racers in the forms of Paulin and Ferrandis and the onus is on Tixier to again deliver just a single classification that might permit a title defence and for the fifth year in a row. Great Britain and Germany are also hovering on the periphery of podium potential and a disastrous day for Belgium (Desalle out, Geerts last around the second and third corners of the MX2 moto) was averted by Jeremy Van Horebeek who was third in MX Open. The Belgians were saved demotion to the B-Final and finished thirteenth.

It is not easy to describe the zeal and enthusiasm of the support for Team USA here. The circuit was teeming with eager public but was suitably dispersed with plenty of fans from other countries as well. It was a mass of defiant public as the temperatures bounced from stuffy humidity to a colder, misty air as the cloud lowered in the afternoon. It was eerily similar to Matterley Basin in 2017 at one point. During MX2 it rained and did not stop through MX Open.

The word ‘shame’ was used quite a lot today and also through Friday; imagining a sun-struck RedBud conjured fantastical imagery of what a truly spectacular location and scene this event could have been. Nevertheless beer flowed and spirits remained high and so far this edition of the Nations has been a success despite the adversity and the truly battered state of areas like the grassy parking zones.

Saturday provided some clues as to what could occur tomorrow but there is a feeling that Team USA will somehow be carried on the euphoria and this is far from done.