Skip to Content
Home MXGP BLOG The caveman and the hairstyle: Day one at the MX of Nations

There was almost a feeling of ‘ah, damn’ today.

Riders, teams and personnel that will fill the paddock at RedBud were not rushing to visit the famous circuit this morning, which is an odd occurrence on the eve of an event that generates a different kind of excitement and fever for motocross. It was mostly to do with the weather as the region of South Bend – almost two hours east of Chicago – was battered by heavy rain that was unrelenting until late am.

The forecast for the weekend was proving to be depressingly true (and the outlook for Saturday is even grimmer) and RedBud was wet and slimy to the point of offering vague memories of Matterley Basin twelve months earlier. It needed the words of Youthstream VP David Luongo to reinforce the fact that the 72nd MXoN could be “one of the most exciting for many years…we hope that many riders will be fighting for the win.” A stark advantage of hosting this annual flagship in the USA is the presence of the American-based riders, and this is combined with the widespread enthusiasm of MXGP athletes in discovering a new and renowned course in a territory that is typically more liberal and welcoming to the sport of motocross. Certainly compared to the limitations of tracks and the niche confinement in Europe.

RedBud testifies to this. Names like Tomac, Roczen, Barcia, Herlings, Plessinger, Cairoli, Paulin, Anstie, Prado, Lawrence and…Windham and Pastrana (more on them later) mean the 2018 edition of this race has an enviable cast list. The significant omissions are Pauls Jonass and Jason Anderson (injury) and riders like Tim Gajser and Thomas Kjer Olsen (teams not entered) and Marvin Musquin (a frankly bizarre decision by the French that ended up backfiring).

The track itself held up well to the dowsing (“this was not the weather we ordered,” half smiled Co-Owner Amy Ritchie) and the central hill for the spectators meant the water had drained and the enclosures were passable. ‘RedBud.2’ was not dissimilar to the course that hosts one of the longest established dates on the Lucas Oil AMA Pro Motocross calendar. The new start gate (the MXGP SkyBox) and 180 first turns were the notable additions to the layout while the paddock heaved with a strong industry presence.

There were already a lot of public splashing around and the skies did clear and become warmer as Friday afternoon went on. “Sales have been really good,” Richie said. “The campsite sold out in August.” The packed living area was easy to see. Clearly there is a lot of anticipation for Team USA to take ownership of the Chamberlain Cup from the first time since 2011. 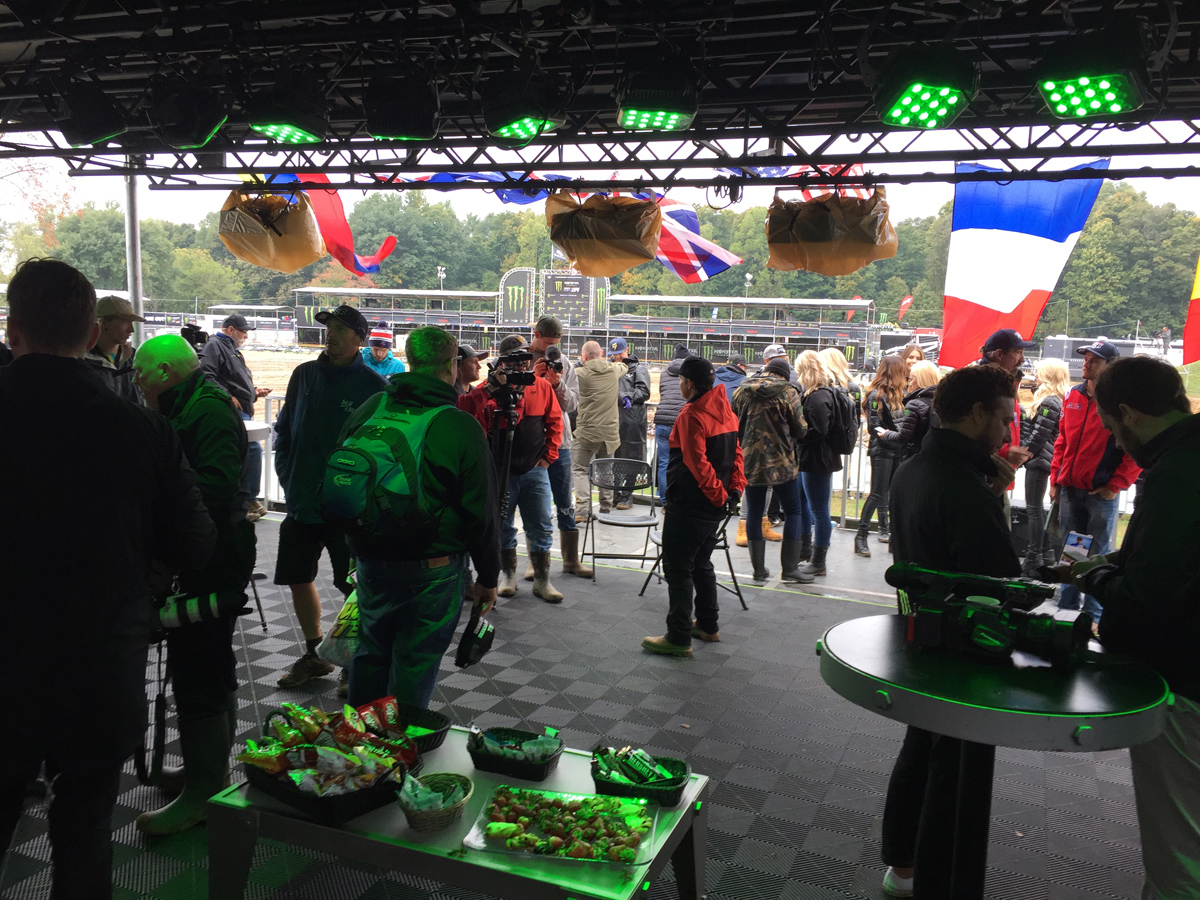 Eli Tomac has not ridden the Nations since his appearance in Germany in 2013 (in the MX2 class), Justin Barcia is also a ‘veteran’ having made his bow in the Lommel sand in 2012 (of all places). 250 MX Champion Aaron Plessinger was showing no sign of stage fright at his debut in the trio; selected and marshalled again by Roger De Coster. “I’m more excited than nervous…” he remarked, having revealed an extreme ‘stars and stripes’ short, dyed hairstyle that provoked a cry of rapturous approval from the home fans. De Coster talked of the aura and expectation around Team USA but some of the near-misses of recent years means the pragmatic Belgian was also realistic. “We don’t underestimate our competition,” he stated. “We should have won in Italy [2016] if it wasn’t for the accident with Jason and I hope we can get back to our winning roll. It should be a good day for race fans.”

Team France are the defending champions and there was little air of the drama and controversy their changes in the line-up had instigated. Dylan Ferrandis in particular oozed confidence (“I have the best 250 in the world”) and it will be good to see the Frenchman in the gate again with MXGP World Champion Jeffrey Herlings – the pair faced-off with aggressive consequences in MX2 2016 and there is little love lost there.

Herlings was one of the few to mention the adverse effects of the weather. “It’s a shame,” he said. “It will be a bit of a gamble instead of a straight shootout. Anyway, as a team we will be strong.”

Even among the national media corps there was a feeling that Team Netherlands are the co-pick for the win. Glen Coldenhoff is now a seven-time steadfast of the Nations and while Calvin Vlaanderen has usurped HRC teammate (and long-time injured) Brian Bogers in the Dutch squad for his first appearance, his grand prix winning pedigree in MX2 has been proved.

The Dutch only made the podium for the first time in 2016 in Italy but with Herlings’ potential to again go 1-1 in his motos (something he has done for the last eight Grands Prix and sixteen in a row) then their scorecard could and should be one of the best.

The regimented introductory press conference was a little limited. No talk of the showdown between the two champions Tomac and Herlings and it would have been timely to place Germany in the two groups with Ken Roczen’s first Nations bow in five years. 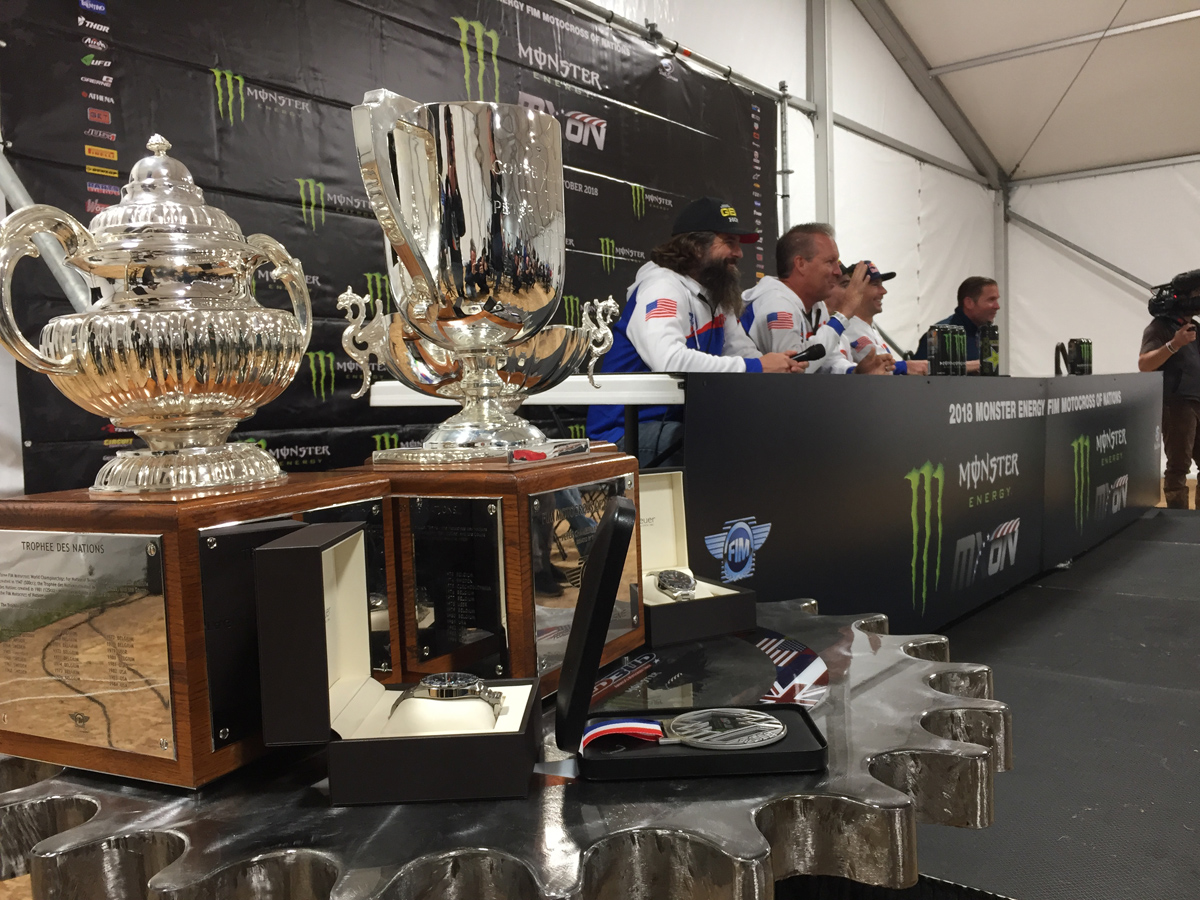 Instead it was Team Puerto Rico that attracted some of the biggest interest. Unsurprisingly really, considering the collective effort of Travis Pastrana, Kevin Windham and Ryan Sipes – steered by Ricky Johnson – as a novel line-up to raise funds and awareness for the hurricane relief in the country after the devastation caused by Irma and Maria and with allegedly 3000 people losing their lives. Windham, labelled a ‘caveman’ by Pastrana on account of the voluminous beard and hair worn by the Geico Honda star and winner of the Nations in 2005, had the call-up after Ronnie Mac’s departure and had only six weeks to prepare after retiring from the sport five years ago.

“It was not a lot of time…I wanted to kill Travis on a daily basis!” he joked. Sipes summed up the allure of the meeting: “Team USA was always the ultimate dream but I’ll race for whoever if I can race the Nations.”

Pastrana talked about the return to a race he last contested in 2000, as part of the winning team at St Jean D’Angely. “When Ronnie Mac called me about this I actually laughed and said ‘are you drunk?’ but I have to say that this might not be the dream team but it is my dream team. We cannot do it for everyone in Puerto Rico but if we can put a few roofs on houses then we will have done something.” 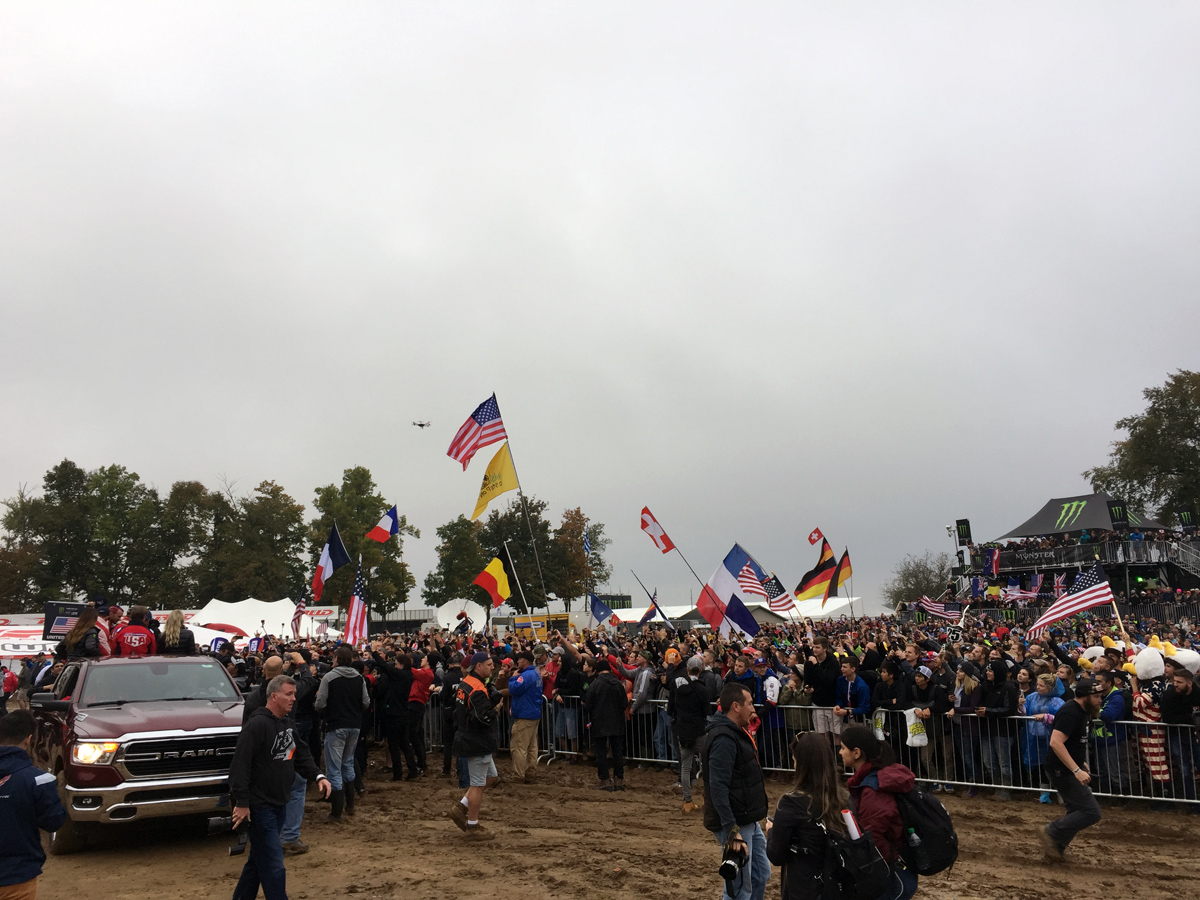 All three riders will thrash two-strokes at the weekend. “I’ve ridden two-strokes all my life and people kept telling me I had to get-with-the-times and rode a four-stroke but then I kept imagining ‘what if I got the holeshot?’ I’d be lucky to last a few corners!” said Pastrana.

[more info and merch on Team PR can be purchased here: https://teampuertorico2018.com/]

Friday effectively closed with the Team Presentation near the start gate and the reception for Team USA was predictably raucous. Imagining scenes of a victory – their 23rd in the competition – on Sunday would create images of clamour unseen for some time, even at the Nations…