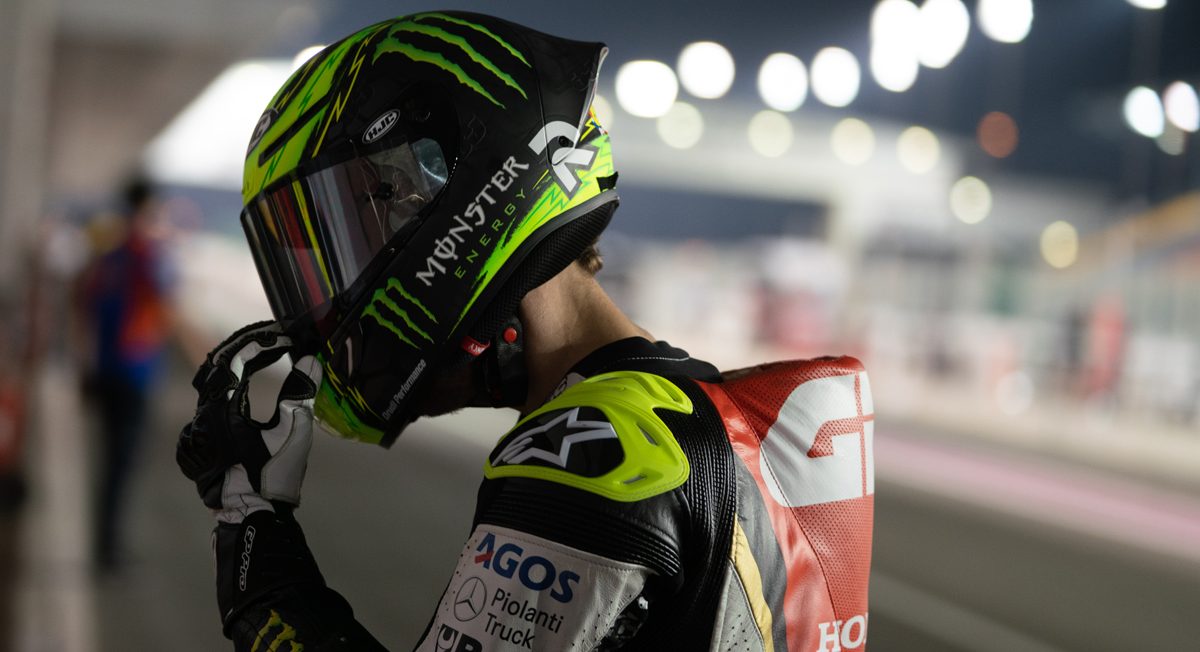 Cal Crutchlow’s words, or rather the lack of them, said it all. “I’m not speechless, but …” The Englishman trailed off as he contemplated a fine third place in Sunday’s spectacular curtain raiser in Qatar, and, no doubt, the months of pain, toil and perseverance that preceded it. “Obviously this was not expected,” he said, recovering his train of thought. “It’s a great relief that I can come back, race and be competitive.”

Competitive he most certainly was. Had it not been for the resumption of Andrea Dovizioso and Marquez’s on-track feud that resulted in the lead changing hand five times on the final lap, and the subsequent political fallout from which four manufacturers protested Ducati’s conniving interpretation of the rules, Crutchlow’s comeback performance may well have been the take away story from 2019’s first race weekend.

No one endured blood, sweat and tears in recent months quite like #35. A podium place, 0.3s back of the race winner, after doggedly outgunning Alex Rins on the final lap and surviving a late scare at turn four, must surely rank among his greatest MotoGP achievements. And not just because he fought off the effects of an unwelcome impact from a competitor’s footpeg early into the astonishing eight-rider fight for the lead. “I couldn’t feel my arse for 15 laps,” he quipped.

This was a minor triumph of Crutchlow’s warrior spirit. It’s difficult to overstate how far away Sunday’s events appeared last December, when attempts to begin walking on a right ankle, shattered by abrupt contact against the gravel at Phillip Island’s notorious turn one on October 26th, had near-immediate consequences. “After six weeks I started weight-bearing,” he told the MCN Sport Podcast in January. “I walked for five days and had to stop because the pain was so bad.”

A pilon fracture meant doctors had to completely reconstruct the talus bone. So bad was its state, there were fears the joint needed to be fused. Despite returning to the seat of his bicycle in December, early attempts at walking inflamed tendons, which caught the nerve and caused enormous pain. It was around then Crutchlow contacted members of his LCR Honda team. Doubts had begun to set in. Participation in the early rounds was far from certain, he told them. This couldn’t have been an easy time, especially when Jorge Lorenzo had shown so well in his first outings for the brand. As Honda’s clear number two last year, the small matter of replicating that feat in 2019 was now unquestionably more difficult.

Thus there was a sense of perspective to his actions throughout last weekend. The reassuring nature of Christophe Bourguinon, Crutchlow’s crew chief of over four years, always has a means of keeping his rider’s emotions in check. “[He] summed it up to me by saying: ‘if we’re honest we didn’t think we’d be on the grid three months ago.’ … [He] told me before the race to remember the email he sent a couple of weeks ago which said, ‘you’re lucky to be racing – just enjoy it, finish where you finish, and if we get points we get points.’”

Lowly as it seems, scoring points seemed reasonable after the final preseason outing. February’s test in Qatar was nothing short of a disaster. Crutchlow placed 17th overall, played ‘catch-up’ to his rivals and admitted it had been a “waste of time” as he tested “different settings and different ways of working”. So bad was the first day of running, team boss Lucio Cecchinello took the extreme step of cancelling his rider’s media duties that night – presumably fearing Crutchlow would let some harsh words slip. While rivals Maverick Viñales and Rins lit up the timing screens with impressive race runs, the 32-year old was miles-off. “We’re not even close to thinking about the race,” he stated blankly.

Never mind missing two-day outings at Valencia and Jerez last November, Crutchlow returned to a revised team in early February. Two of his electronics technicians – Arlan Holterman and Marco Barbiani – had been moved to Lorenzo’s garage for 2019. Experienced HRC engineer Gianni Berti also switched LCR for Repsol Honda, despite the protestations of Crutchlow and Bourguinon. Minor factors, you may ponder, but new faces to learn the bike, and the rider’s working methods.

Yet Crutchlow rarely looked flustered. It speaks of his enormous self-belief that he never appeared anything other than quietly confident coming into round one. This was in light of machine difficulties, too. He lacked front-end feel from the moment he swung that swollen right ankle over the ’19 bike at Sepang in early February. Geometry adjustments during free practice aided his cause somewhat. But come the race he was still riding differently to the past, compensating those turning difficulties with the front by using the throttle mid-turn. “I haven’t [cured the front end feel],” he said. “We spun the rear to turn the bike.”

The Honda’s slightly unruly character has always demanded heavy usage of the rear brake on corner exit. Movement in his right foot is still some way below its normal rate. “If I look back to the start of January I had 20% of the movement I used to have,” he said on qualifying day. “I’m probably at 70% now. It’s not enough.” Pain wasn’t so much of an issue; more there was difficulty in lifting the right foot from the rear brake. A thumb-operated lever wasn’t to his liking, meaning Crutchlow regularly found his foot stuck mid-corner. “I just can’t bend it enough. Even on the straight to try and put it back on the peg is a massive effort for me.”

Dovizioso’s decision to repeatedly pass Rins along the 1.068km main straight then slow the pace mid-race aided Marquez and Crutchlow’s cause. With the race two seconds slower than the previous year, the Englishman noted he was not as dependent on the rear brake during these 22 laps as he was in practice.

Still, this was way beyond pre-race expectations of “getting points”. Aside from his well-known battling qualities (ex-crew chief Daniele Romagnoli calls him ‘a Braveheart rider’), Crutchlow managed tyres and his aggression like a seasoned pro. He’s now scored podiums in each of the last eight years of premier class racing – a feat not matched by a British rider since Mike Hailwood’s champagne-flavoured stay in the 1960s. A premier class podium haul of 17 now towers over Ron Haslam’s nine and Niall Mackenzie’s seven, fine home-country riders known for battling through another era of greatness.

Barely surprising then that Crutchlow found it hard to take this recent achievement in. “First of all I wanted a normal life and to be able to walk and I can,” he said of his primary wishes last October. “It’s just a bonus that I can still race motorcycles.” Another is that he can do so at such speed. At this rate, repeating last year’s pre-injury feats no longer seem far off. Another season pestering Marquez and Dovizioso beckons.