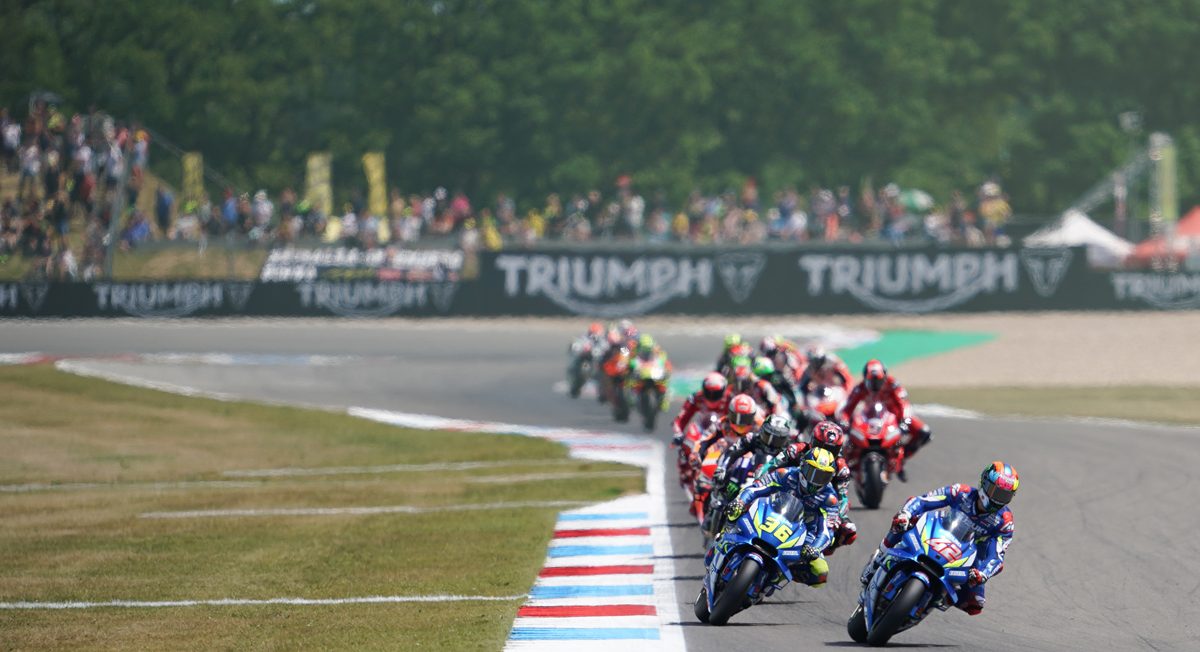 The silence of Assen

Assen is a fascinating place of contrasts. You could swear that some of the old cambers and dips are exactly the same as the road-derived brick-paved course that drew motorcyclists to the region in the 1920s. Yet for all the wonderful character of the narrow layout that funnels the riders south through a succession of flip-flop corners and mini elevations, it is offset by the modern and featureless Turns 1-5: Haarbocht to Strubben. Later, in what is now a short lap, and the outstanding Hoge Heide wonky straight (meaning ‘high heath’) is a breath-taking sight when the bucking and protesting MotoGP machines are feathering throttles and charging down to Ramshoek.

Away from the curving grandstand that houses 60,000 people and was completely full for more than a kilometre of its length, Assen spreads out significantly.

The end of a MotoGP session brings an odd calm and silence within the southern loop. It is surrounded by shallow banking with a wild plantation and apparently something of a bird sanctuary in the infield. The culmination of MotoGP Free Practice 3 session and the practice starts brings an eerie stillness and total dislocation: no tannoy, no music. Just the soundtrack of nature, a rustle here-and-there and a faint hum when walking past one of four big screen TVs.

Across the road on the outside of what used to be the old northern loop complex, the campsites are full by Saturday. Unlike the edgy hedonism of Le Mans or the machinery abuse prevalent in Mugello or Jerez, Assen carries an established festival feel. The waft of BBQ smoke and bonfire dilute the blue sky and achingly elongated sunsets that close all three days of a summery 2019 edition; the 71st Grand Prix at Assen.

Inside the paddock there is a distinct feeling of being surrounded by many invited guests. Some decked with apparel signifying their status as fans, others clearly discovering this Dutch institution that is the TT. Those same people will have driven past the line of hardened spectators in deck chairs sitting atop the banking at 7.45 in the morning; their backs to the traffic, already in place for the full programme on raceday.

When Maverick Viñales – a rider who has waited nine months since his last MotoGP victory and who toasted his third at Assen, his maiden premier class success – says “it is all in the atmosphere…you can feel the emotion” then he is talking about the tangible enthusiasm of the public that flood the banks, and the ones quickly won over by the spectacle that the track provides. Those that regard the TT as an essential annual note in the agenda, one that will most likely have been passed down a generation or three, and those that recognise the sensation of motorcycles bombing down Veenslang is something that cannot be missed.

Indeed there was something particularly apt about Honda’s 60th celebration at a venue where a chronicle never feels far away. No other circuit seems to cast such a ‘youtube spell’ and make you want to source old clips and memories.

Assen doesn’t thunder with noise. The actions of the riders are not greeted with a wild din but there is a knowing appreciation from this audience.

The audible from a gripping Moto2 race was largely of carbon, metals and other composite scratching and crunching on gravel and tarmac. The chase provided by a category that is often maligned and rarely given credit for how bastardly hard, close and unforgiving it can be was arguably the highlight on Sunday. For all of Marquez’s, Viñales’ and Quartararo’s jousts (and the spectacular tankslappers that were causing the 20 year old to ease off the gas along Veenslang and due to his line choice and gusty winds) it was the crash, bangs and wallops along with the limit-pushing by Augustino Fernandez (what a revelation in Moto2) and Brad Binder that stuck in the mind.

There were shouts. Among the choice obscenities in English and Spanish from the likes of Sam Lowes and Alex Marquez the Assen marshals could enjoy (or endure) a different kind of language class. Perhaps only a few heard the grumbles for at least two riders who complained of gearbox irregularities: Pole sitter Remy Gardner being one of those. The Australian crashed and was ultimately robbed of the superb narrative of aping his father’s feats. Wayne loved Assen, but his Grand Prix career infamously began with that debut in 1983 when he struck the fallen Franco Uncini: the accident ending the career of what is now the FIM Safety Officer. The 1987 500cc World Champion would return to Assen victorious in 1986 and 1988 and surely 21 year old son Remy will get another opportunity to create history where there is history.

Assen was pivotal for Viñales and emboldening for Marquez who is becoming increasingly ruthless with his consistency on what appears to be an intricate and difficult HRC RCV. “Oh yeah. By far. It’s hard,” said LCR Honda’s Cal Crutchlow when quizzed on whether 2019 was his toughest with the brand in five years so far. “But I don’t think it’s hard just for me. I think the only one it’s not hard for is Taka [Nakagami, using the 2018 configuration of the works bike]. That’s honest. I think Marc is riding harder and better than he has before to make it work so that he is leading the championship.”

More contrasts at Yamaha. While Petronas Yamaha SRT continue to be the annoying little brother to the factory team, Assen sent the paths actually within the Monster Energy squad further afield. Viñales appearing relieved, confident and empowered while Valentino Rossi returned early to the pitbox for the third Grand Prix in a row (TV Commentator Matt Birt said it was a surprising trend that had not happened since 2011 for the icon). In the Media Debrief afterwards Rossi was standing in the middle of a posse of journalists. The absence of chairs as part of the rapid packing-down procedure for the team in order to get the whole show to Germany and the Sachsenring meant the Italian was a little like a politician under pressure; crowded by camera lenses, MP3 recorders and having to pivot as questions on his form, his motivation and with a hidden vein of doubts over his longevity began to surface.

“Yeah three crashes in a row is a big, big shame,” he said. “Also because Mugello, Barcelona and Assen are three of my favourite tracks. So it’s a great pity also for the championship, but the important thing is to try to find a solution for being faster. The bigger problem is that I was quite slow.”

If there was another contrast to be found then it was in the power of a rider’s right hand. Red Bull KTM could be forgiven for being baffled at the extremes of their racers: Pol Espargaro soldiering through a dose of painkillers and a throbbing right wrist to take 11th place while Johann Zarco parked the RC16 after ten laps with complaints of arm-pump. Zarco’s predicament and latest act of submission further complicates his future at KTM. There have been centimetres of progress for the Frenchman but whether he would be able to actually turn around his first experience as a factory rider and display the attitude and guile to motivate and make strides is a mystery. It was a hot topic, particularly among the gathering of French press at Assen as the evolution of Quartararo keeps Johann’s career spiral firmly in view and context.

At 8.45pm Assen was largely deserted. The banks litter-strewn and green. The long lines of traffic and cones weaving into the circuit now gone and the roads free again.

For fans still drunk on nostalgia then there was not much longer to wait. Another former street circuit in the Sachsenring (and with a tale more fractured and perturbed than Assen’s love affair with motorcycling) takes MotoGP into something else utterly unique.