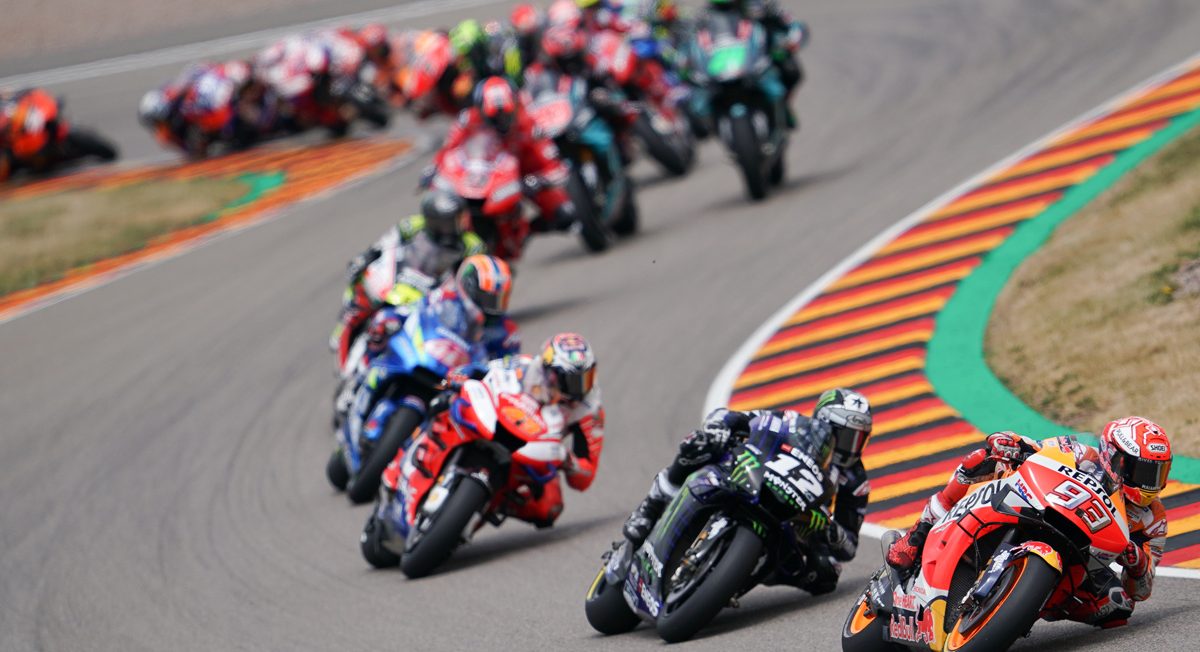 Pain is a never-ending factor in the life of a motorsport athlete. From their first crash to their last and all the way into retirement their bodies gradually become a map of moments reflecting a physically gruelling career. They know the agony that follows the tumbles, crashes, breaks and bruises and yet they jump right back on the horse without a glimmer of thought. Those aches and pains that will prosper with age are not even on the radar right now, unlike those who came before them. It is a mindset that is unhinged but completely and utterly unchangeable so they roll with the punches even if they really hurt.

Riders are the walking wounded and have been for decades. Modern day athletes have the ability to bounce back in incredible fashion. Sporting fresh supple scars, skin grafts, mangled fingers, bowed legs and a little limp that should go away with time. But ever since we can remember we have been baffled by the amount of time these guys allow for their bodies to recover. At the Assen TT, five time World Champion Jorge Lorenzo sustained a T6 and T8 fracture after a peculiar crash into the gravel. Lorenzo has a long list of injuries not only in the last twelve months but over the course of his career including two broken ankles (Chinese GP 2008), a broken left collarbone (Assen GP 2013 – picked-up on Thursday, operated that evening and ridden on Saturday), lost the end of his ring finger but saved its mobility and functionality (Phillip Island GP 2011), broke the scaphoid in his left wrist (Training injury 2019) and bruised his back, wrist, fingers, feet and ensured a rib fissure (Qatar 2019). And maybe there’s more. You can see by the way he walks that not everything is as oiled as it once was but he is a believer that “pain and suffering are temporary, surrendering is forever”. A mindset shared by very few.

Ex HRC Repsol Honda rider Dani Pedrosa has also faced the pain threshold on many occasions, mustering a whopping twenty-two injuries between 2003 and 2018 before his decision to retire. These consisted of multiple collarbone fractures, compartment syndrome, fractured left wrist, deep wound to right knee, loss of feeling in left knee, a fractured humerus, fractured left tibia and left ankle and a fractured left foot. It is easier to label what he hasn’t broken rather than what he has. Riders like Marc Marquez and Valentino Rossi who have had brilliant success, have endured their fair share but unlike most have continued on with little fear. Marc Marquez was left with double vision after a heavy crash at the Malaysian GP in 2011 and a repeated dislocated shoulder in 2018 but in both instances medical treatment fixed the issue. The only remnants are the scars, and there are a fair few mapped out.

Similarly, Rossi was faced with a displaced and exposed leg fracture at the Mugello GP in 2010 and a broken leg during a training crash in 2017. This was a key moment where he realised just how much easier it was to heal seven years earlier in his career; a reminder of the slow process of age. Tito Rabat on other hand was infamously clipped by fellow rider Franco Morbidelli’s bike at Silverstone last summer. He fell victim to a triple fracture in his right leg, but was up taking small steps the next day and only seventy-three days after surgery and physical therapy he was back on a bike. During FP4 in Assen this year, Rabat crashed at the last chicane and in a sprint back to the garage he hobbled across the track, compensating with his left leg. It was nerve wracking to hear the bikes closing in and watching him struggle. Almost a year later and the effects of the accident are still prominent. Most riders have marks scattered across their bodies but only a handful bear the full brunt of the damage at such a young age. For some maybe the stress of contractual obligations and a job in one of the hardest industries is what drives them to ignore the pain and heal quicker than realistically possible.

Technology hasn’t always been at the level it is now, so accidents and injuries proved to be even more severe than we see today. Five times World Champion Mick Doohan pottered around the Assen TT for Honda’s 60th Anniversary. He had a slight limp and a large scar on his right ankle and hands that looked a little stiff, in-fact from memory one of them didn’t even move. They were the remnants of a first lap incident in Jerez 1999 where his right leg was trapped underneath his bike. Twisting his lower body in order to get out, he kissed the kerb and caused it to snap. He damaged his wrist, collarbone, the muscles in his back and faced the scary reality of a possible leg amputation.

Broken bones and limps in common, fellow World Champion Kevin Schwantz was no stranger to a crash. 1994 was a year riddled with injuries including ones from his past that came back to haunt him. A dislocated hip, broken collarbone and the biggest of them all, a broken wrist which after returning a mere twenty four hours later (something that usually takes eight weeks and up to six months in total to heal) ended up producing serious cartilage damage and further fractures. The motion of braking and accelerating caused the bones to grind and further serious deterioration. Both of these issues would finish the rider’s respective careers and alter their bodies evermore.

They are not alone though. Australian Troy Bayliss who is still racing today, underwent surgery in March this year after damaging both hands again. Troy is a man who couldn’t hide his wounds even if he tried. In 2007 during the Donington World Superbike round he crashed and was sent sliding across the track. The top two joints of his little finger were amputated and one of his testicles had split. Still to this day he says that he walks like someone has hit his manhood with a hammer. Wayne Gardner is another Australian whose injuries seemed to match his impact in the sport. After sustaining a broken foot, broken leg, broken toes and broken wrist over the course of his career he decided it was time to call it quits. Much like himself, son Remy Gardner at a mere age of twenty one years old broke both of his legs and fractured his ankle in a motocross accident last year. He is now back racing for the CIP team and fighting at the front but what will his body decide to do in several years time when he’s put those cracked bones to use too quickly? Will it be another re-run in the footsteps of his father?

There is no doubt the older generation has played a key role in creating better technology to keep riders safe. The FIM introduced compulsory airbags in 2018 and their kit is constantly tested to reach the highest quality possible. But, this protection isn’t fool proof and injuries can be just as severe as they have always been in this industry. At the moment, bouncing back isn’t the problem. Riders that are young and in their prime naturally heal quicker, it’s easy for them to be flippant. There is no question that the speed of their recovery is impressive but sometimes you have to sit back and wonder if they ever think about the long term. It doesn’t seem to be a concept that is programmed into their minds. Maybe they have already accepted their fate ahead of those grey hairs and creaky joints or maybe they feel like they don’t have a choice.