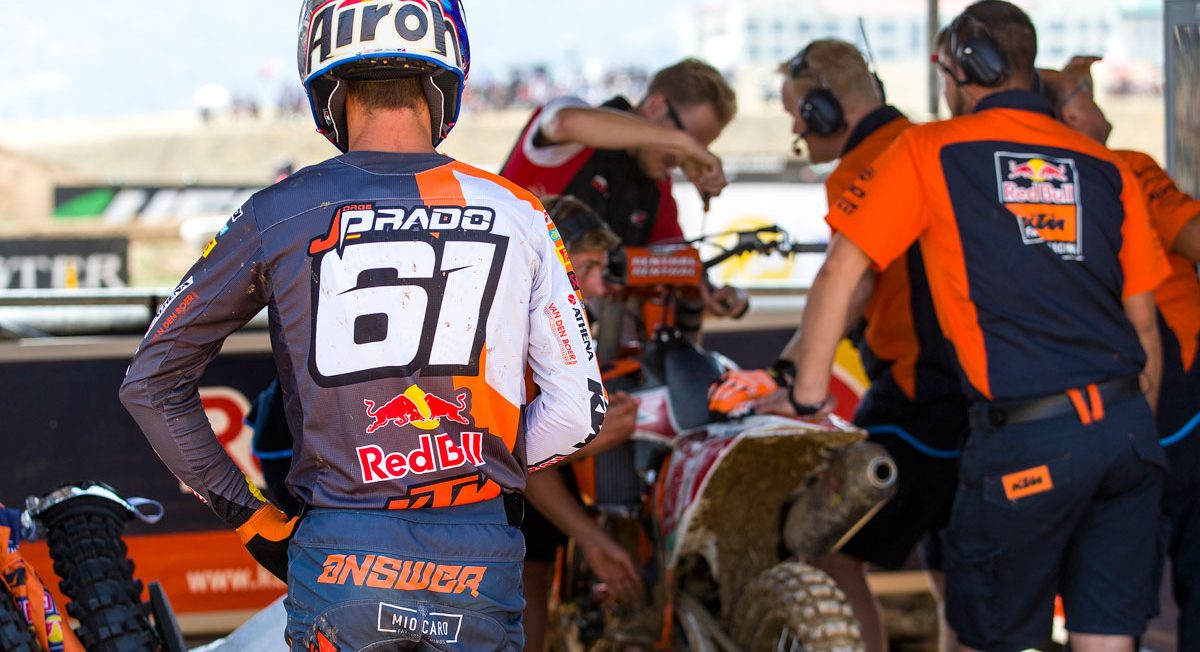 Prado still without a set date for MXGP return

Jorge Prado frustratingly celebrated his 19th birthday away from a factory Red Bull KTM motorcycle. “I really want to start riding as soon as possible…mainly because I miss it!” the 2018 and 2019 MX2 World Champion said this week less than ten days after his emerging from his teens and while convalescing from the snapped femur sustained in a training crash in December.

Last week Prado received verification from doctors to step-up his training programme with more upper body gym work and cycling and therefore less rehabilitation. It is the second winter in the last three years where he has had to deal with injury: in 2018 he started his second Grand Prix year lacking bike time due to a broken arm but would eventually catch and overhaul then-KTM teammate Pauls Jonass to snare his first world title. A shoulder issue early in 2019 meant he had to miss the British Grand Prix and the absence was the sole blot on an otherwise exemplary campaign of results and trophies.

The broken femur represents the most serious ailment of his young career (he had previously fractured his lower left leg) and it occurred through an innocuous practice smash at the Malagrotta circuit near Rome where he habitually trains and tests with Tony Cairoli. “I’ve not thought much about the crash; for a day or two afterwards I was replaying in my mind what had happened, but I didn’t make a mistake and there was no problem with the bike: it was just bad luck,” he says. “It had started to rain and I lost grip over a very easy jump! An amateur might crash there but there is no way a rider at my level should do that.”

“The circumstances mean that it hasn’t affected my confidence or my desire to get back on the bike,” he added.

Prado cannot run or contemplate any ‘impact-based’ exercise for now and this means a schedule for his return to the KTM 450 SX-F is still undetermined. “We don’t have a set date at the moment,” he stresses. “This break needs quite a bit of work and it means I might end-up on the bike when the leg is not in an ideal condition. I also need to work as much as I can to build up the muscle strength again, that will be the main thing before I can think about the bike.”

Prado is set to form part of the greatest team line-up seen in Grand Prix when he will eventually join Cairoli and Jeffrey Herlings under the Red Bull awning. His presence will add another dynamic to the KTM rivalry that was played out in Herlings’ favour in 2018. Prado is Cairoli’s friend, protégé and close teammate but received messages of support and advice from Herlings immediately after his accident. Herlings himself suffered the same injury in 2014 and narrowly lost what would have been his third MX2 crown. “Honestly that surprised me, and I really appreciated it,” Prado said of the gesture.

In the last five years the MXGP championship was won by rookies in 2015, 2016 and by a second-year athlete in 2018. Prado is now very unlikely to have any of the expectation to make an instant splash in his first term with the 450 but he brushes aside the notion that his delayed entry into the premier class means less pressure to deliver results. “All I want to do is progress,” he says of his view on the 2020 campaign. “I had very little time on the 450 but the bike was already ready to race and that also gives me confidence for when I can finally be in the MXGP gate.”