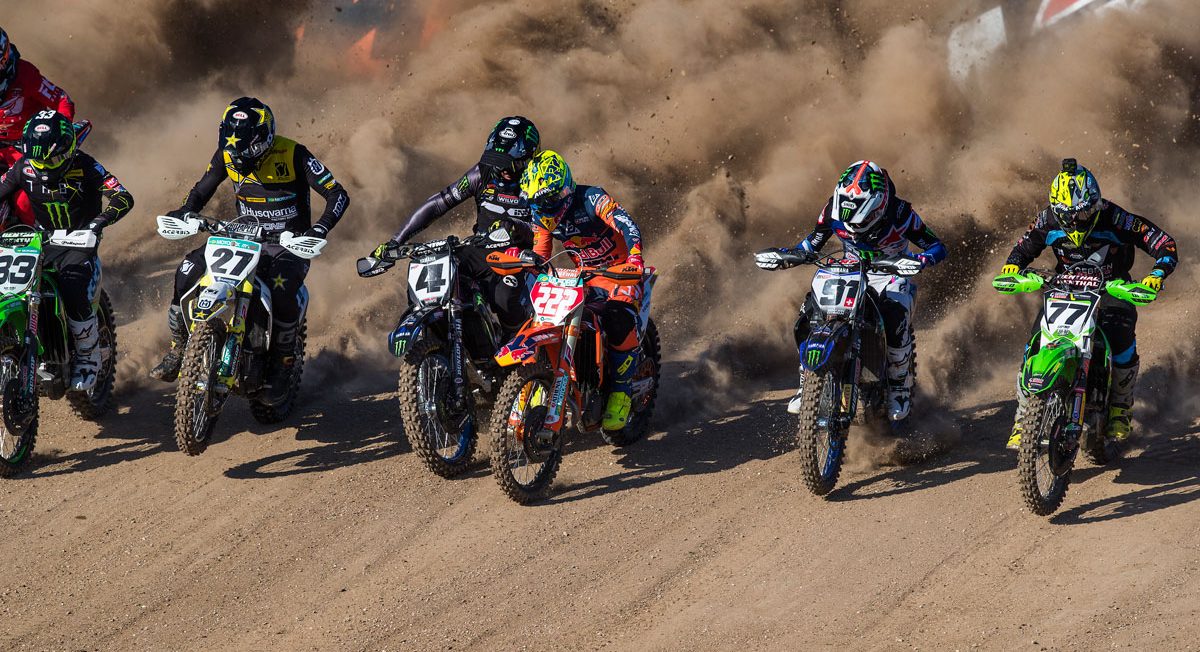 The value of the first

Ah, first round hype. To be honest there is nothing like it. There can be other challenges and situations such as ‘who can defeat Tony Cairoli on Italian soil?’ or ‘who can stop Jeffrey Herlings at Valkenswaard?’ and ‘will the French prevail in France?’ but there are few better prefaces than Grand Prix #1 where every rider has yet to start their roll of momentum and confidence and the formbook is blank.

We all know the factory riders likely to be setting the pace at Matterley this weekend but that doesn’t mean nerves, jitters or rustiness won’t come into play and possibly determine a final result. The British Grand Prix is first on the slate for the first time in the modern era which means the conditions could range from a moderate late winter climate to extremely testing mud, rain and wind although it seems that the Winchester-site has braved the grim stormy UK weather fairly well in recent weeks. It’s a mixed bag and who knows what racer will jump out first.

Matterley will see MXGP and MX2 protagonists eager to compete after their last major outing in the Netherlands on September 30th 2019. For the vast majority of the experienced Grand Prix pack it is also the first nibble of a big cake that will carry both sweet and sour tastes over the next six months with visits to sixteen other countries and three fixtures per month (with the exception of July). Once the teams start rolling out of the UK and on towards the Eurocircuit near Eindhoven thoughts will already be working on the next instalment of 57 race starts to take place. Matterley encourages excitement but will also see some reservation, especially from riders returning from serious injury like Cairoli, Clement Desalle, Romain Febvre and (maybe whisper it with hope) Jorge Prado. A couple might gorge on the occasion, most will show some restraint: this could be another decider in the overall top ten classification on the day.

The value of round one is debatable and will be a source of a small feature in MXGP Special Edition of OTOR next week but mathematically it still constitutes a maximum haul of 50 points. Take it or leave it, considering that only two of the last ten MXGP championships have been won with an advantage less than 50 at the end of the season.

You could argue for the bolstering effect administered in the victories by Tim Gajser and Jeffrey Herlings in Argentina in both 2016 and 2018. Rookie Gajser went on to be champion that year and Herlings’ last lap battle and demotion of teammate and reigning #1 Tony Cairoli set a template for the ’18 season. In terms of the final outcome in the standings then round one has proven to be fairly unprophetic in the last ten years. Since 2010 only four athletes have won the premier class: Cairoli (2010-2014 & 2017), Gajser (2016 & 2019), Romain Febvre (2015) and Herlings (2018). From that spell only Cairoli (2012 and 2017), Gajser and Herlings have walked away from the opening salvo with the first win bonus of the campaign, just 50%. Other victors have included Clement Desalle (three times), Gautier Paulin and Max Nagl; all of whom had their subsequent title plights disrupted or ruined through injury.

Of course curtain-closers are fantastically dramatic and watching Herlings limp into the 2014 Mexican closer with a weak left femur and lose out on his second MX2 crown by just four points and witnessing the jubilation that accompanied David Philippaerts’ final race title-confirmation at Faenza in 2008 (the first Italian to take the premier class crown since Andrea Bartolini’s 500cc success) provided unforgettable fare. Those moments are few-and-far between however whereas ‘round one’ comes around without fail on an annual basis.

That only leaves me to urge fans to make the trip to southern England. Yes, it could be a washout but could also also serve up something a little different compared to the usual British Grand Prix, and is worth the investment considering that Matterley almost didn’t make the schedule for 2020 as part of an events-promotion and organisation landscape that is not getting any easier or more feasible. Even if the odds seem pretty long for a ‘comfortable’ Matterley experience the chances of catching some promising and unexpected action appear to be much brighter.