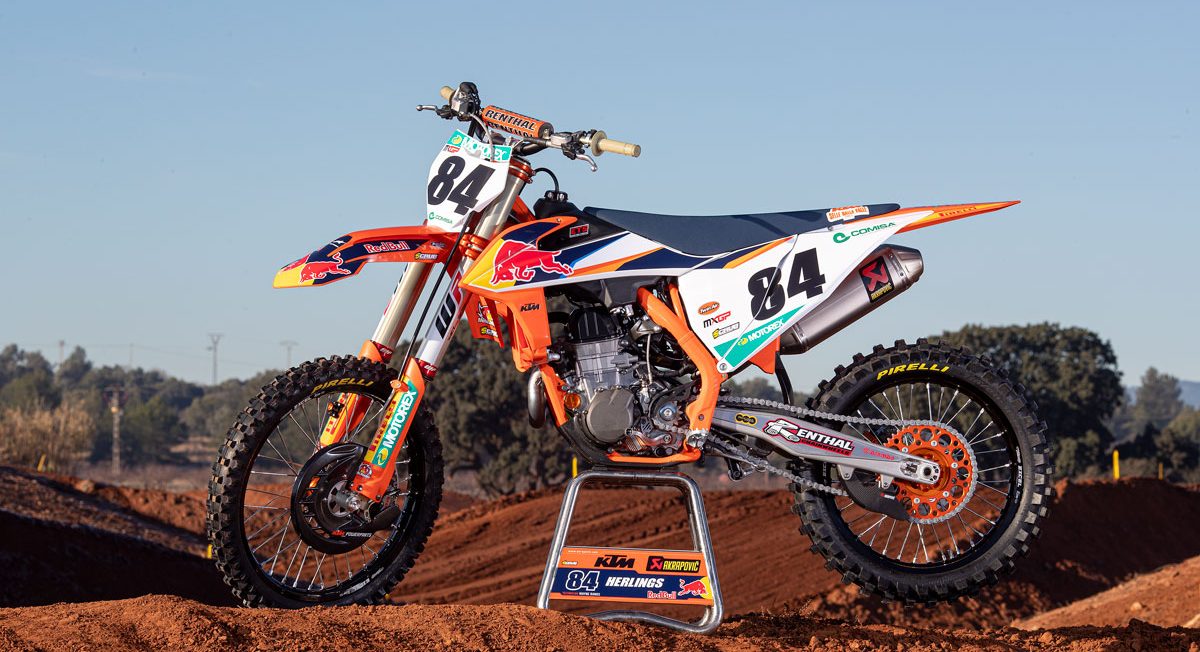 Since 2010 factory KTM motorcycles have claimed seven premier class FIM Motocross World Championships; five with the 350 SX-F and two with the 450 (the bike was also used to win three AMA 450 SX supercross crowns in the same period).

Just how different is the racebike that Tony Cairoli, Jeffrey Herlings and Jorge Prado steer in Grand Prix compared to the production version found gleaming on a dealer showroom floor? We decided to ask Team Technical Co-ordinator and Team Manager Dirk Gruebel for the lesser known details…

Do the works KTMs hit the minimum MXGP weight limit of 99kg (with operational fluids)?

No, to be honest we are far away from it. The bikes are faster, the guys get faster, the jumps get bigger and a couple of years ago we had trouble with wheels and that’s where it starts: you reinforce stuff, reinforce trains and other components. In a sand race the tank capacity needs to be bigger and certain riders like Jeffrey uses more fuel compared to Tony. It all adds up. If we could find two kilos then it would be nice because then we’d be near the limit again. At the moment we are around 102kg. We cannot use titanium in the wheels axles, for example, because it is against the rules. All the small parts like nuts, bolts, fasteners are titanium already. We could still trim further but you are only talking about a few grams.

It’s widely accepted that horsepower is not the most essential thing for a 450 now but has the output varied over the years?

I think we still have more power than the riders find useful. We need to make the bikes ridable and tame the power to the riders’ needs. Nobody is really riding on the maximum we can offer.

It might be hard for motorsport fans to grasp that: there are not many racing series where you are trying to dumb-down speed…

It’s not that we don’t want power…but grip is limited in motocross and the more you put-in, the more wheelspin you create and you cannot really have traction control; I mean we have a form of TC but it is difficult to get the power to the ground so we work more with power delivery than max horsepower.

What’s your opinion on the holeshot and geometry devices used in MotoGP and how such a high-tech sport is using rudimentary theories developed in MX and mountain-bike?

Ten years back we also played around a lot with geometry. We experimented with the holeshot devices, like they have now, but since MXGP has used the metal grid flooring it has been a lot better. Still, after the net you hit the dirt and you need power on the ground. Everything is a bit more limited here compared to asphalt where you have way-more options and where you always have more or less the same grip.

If Cairoli or Herlings don’t want more speed or horsepower from their factory bike for the next racing year then what are they asking for during the off-season and tests?

Well, some guys ask for heaps of torque. Tony and Jorge are short-shifters and Jeffrey is coming more towards that way; he was more of a revver but now he’s using more torque. You want to be able to shift early with maximum torque for the power to get to the ground. Some guys want that aspect to be really responsive when they are coming out of a turn and others like a little bit of a delay. It is very specific from rider to rider and we try to dial it in.

Cairoli and Herlings have both been on KTMs for so many years, so you must know what they like, what they want and it must be difficult to make incremental changes compared to a rider that is new to the team the technology…

It is difficult for him {Herlings] because he’s quite conservative, so for anything new you almost need to convince him, let’s say, with a better part by showing an improved lap-time. His first feeling is always relying on what he knows and he has had, especially when he was winning like he was at the end of 2018: he didn’t want to touch anything on that bike. He was so fast, and that was it. Basta! But there are always little improvements we can offer and you need to get it dialled-in for them. We eventually get to a point where he will ride the new stuff but other guys will just jump on it and be happy and others need to feel their way.

When was the last major change to the 450 SX-F?

It was the 2019 bike with the new concept. It came from ’16 bike model that we rode in ’15-’16-’17 and then in ’18 we promoted the ’19 bike that was a different frame idea and the swingarm was new as well. It felt different for the guys. It is not completely different – it still feels like a KTM – but varied from the previous model.

Electronics: are you satisfied with the potential for development?

100% there is more out there…but then they need to loosen the rules. It will also be a milestone in terms of costs because you will need real specialists for launch control and traction control and the whole data acquisition side will explode. We are at a step with the sport where it is not cheap but then on the other side it is not super-expensive, however moving to the next level means more manpower and budget. I don’t know how much more you will get out of it. What scares me also is the racing environment: it’s dirty, raining sometimes and these bikes are washed multiple times during a weekend and you are almost asking for trouble. This doesn’t happen with a MotoGP bike; imagine if you had to wash it every weekend with a pressure washer! It’ll cause havoc.

KTMs have been prolific in both classes in the last ten years but people still look at HRC and their resources as pioneers for new technology. How do you feel about that?

Well, you see the HRC facility and what they can do. I don’t know how many people they employ there but it is probably half of all KTM straight away. We are talking about a couple of thousand and in all of KTM motorsports we are a couple of hundred across the disciplines from rally to enduro, motocross, road racing and so on. So they have a lot of experience racing – they even went to Formula One – they have a lot of specialist knowledge in-house and they have that reputation of bringing the highest technology and pushing forward. We could perhaps improve [to match them] but we would need time. I think motocross is still pretty mechanical because it is restricted. If they [the FIM] came up with ride-by-wire then that means traction control and if that was open tomorrow then they [HRC] might be ahead of us because they have that experience from MotoGP and so on. But we are also ‘on it’. We are learning and improving and use it on the rally bike for testing. It never stands still. Like I said, motocross is mechanical and if you set-up your bike good for your rider and the suspension works and he is happy with the frame behaviour then I still think you are at the top of the game.

What about the evolution of suspension?

There are always small steps. You find improvements, from bending behaviours to overcoatings and piston designs, volumes and so-on: it is endless. Some guys cope with changes right away and others don’t. We try to make everybody happy and with a setting that they like. WP had a good idea in the past with the air shock, which worked brilliantly but didn’t get tested enough and was thrown into racing pretty quickly. In my opinion it still has potential and the plug was pulled too quickly. It definitely needed more testing and with perhaps slower riders before bringing it up to the big guys that are at a different speed.

Kawasaki Racing Team said their 2019 race bike was about 90% different to the stock KX450F. Is it a similar ratio for the KTMs?

Yeah, I’d say pretty much the same. I mean, it seems very much like a stock bike when you first look at it but a lot of parts are different. We need them because of the extra stress on the bike and to equip it for a guy riding twenty-five seconds faster than the average guy. You cannot stick with the normal material. You need to choose the best on the market for the engine, the suspension and so-on. 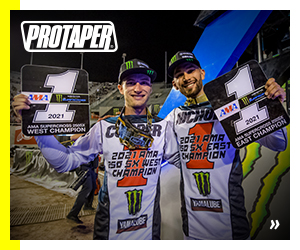