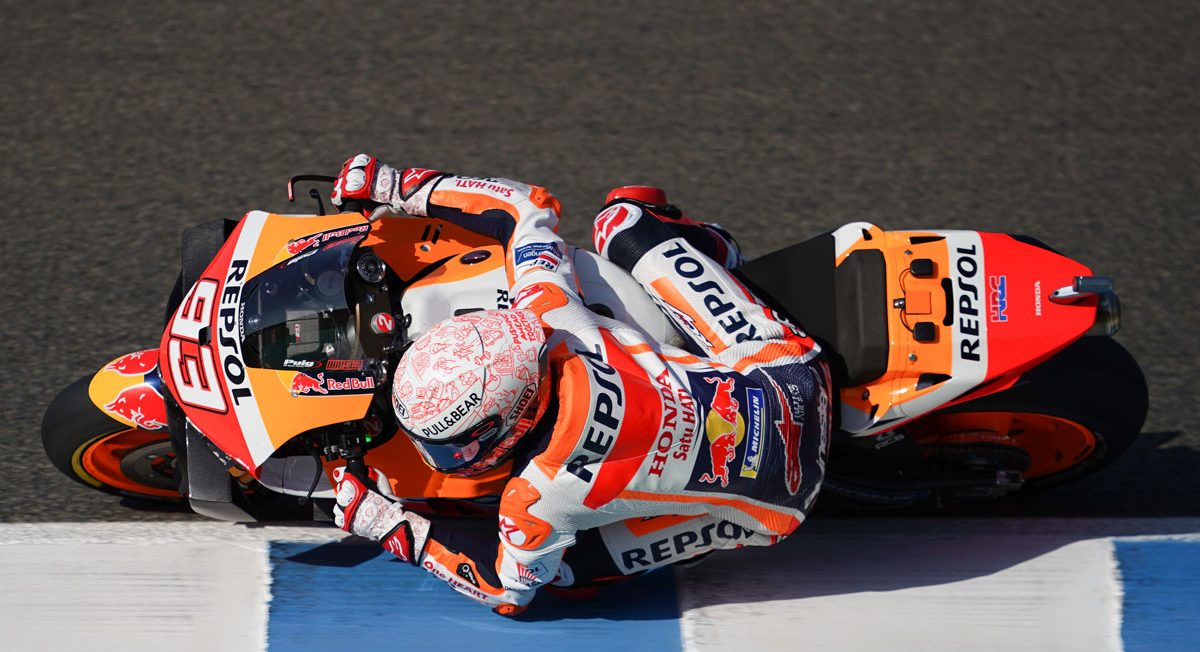 It’s funny how history works out. Sunday marked the 245th day since MotoGP machines last formed on a grid to compete for points and prizes, the longest period without premier class action since the winter of 1985-86. Back in the mid-eighties Freddie Spencer broke that particular barren spell by flaunting his talent to a degree that had his rivals’ heads spinning.

We all know what happened next. Eleven laps into race one at Jarama – and ten seconds clear of second place – a numbness started to spread up Spencer’s arm. So much so he slowed before pulling in to the pitlane to the amazement of the watching world. Compartment syndrome ruined the feel in his right wrist; it was the last thing needed for Freddie’s ever-depleting well of motivation. He would never be the same rider again.

Early prognoses of Marc Marquez’s fractured right humerus suggest this latest injury is in no way as serious as first feared. Through his twelve year stay in the grand prix paddock there are certain parallels to draw between ‘Fast Freddie’ and the 27-year old Catalan that has done his utmost to eclipse the American’s records. There was the odd similarity in Marquez’s most recent display and Spencer’s efforts on that opening day in ’86: namely a performance so dazzling it defied logic before departing from the track, hopes of retaining a championship hanging by a thread.

With Sunday’s memories still fresh, it’s hard to recall another title defence that began so dramatically, Spencer’s ’86 effort included. As one Twitter user pointed out, when did a rider last rack up the season’s most incredible save, most stirring comeback and – quite possibly – most spectacular crash in the space of 17 dazzling laps? Like Estoril in 2010, Motegi in 2012 or Termas de Rio Hondo in 2018, this was the eight-time champ operating way beyond the parameters of skills exercised by his opponents.

Saving the front-end slide at turn four at 101.9mph would have been enough to make this occasion memorable. But Marquez was only getting started. It would be no exaggeration to say the manner in which he ruthlessly eased by Danilo Petrucci at the scene of his save on lap ten, Miguel Oliveira on lap 13, Franco Morbidelli and Francesco Bagnaia on lap 17 and Andrea Dovizioso and Pol Espargaro on lap 19 as he charged from 16th to 3rd was riding from another planet. In this form no one even comes close. His speed was such even nemesis Valentino Rossi decided to move to one side to “not create problems.”

Overtaking shouldn’t be made to look so easy around one of the narrowest, most physical layouts on the calendar. Factor in track temperatures of 55 degrees and grip becomes – what race winner Fabio Quartararo called – “critical.” The Frenchman, who won his first MotoGP race, said, “Honestly it felt so strange. After the Moto2 race we know that normally the grip is low, but I didn’t expect (it to be) that much (less).” The majority of races at Jerez fall into the ‘processional’ category because of this. Mounting a comeback here veers on the realms of fantasy.

The disbelief in brother Alex’s voice was palpable when discussing the reigning champion’s performance on Sunday evening. If the telemetry from the #93 machine was made public, Alex asserted, “every rider would be destroyed … He was unbelievable today. And I think all the riders here in the paddock will know that today he was the winner of this race.”

Quartararo would (rightly) contest that claim. For as witnessed with Marquez in Argentina two years ago, operating so close to (and occasionally over) the line of what’s physically possible can come at a cost. When intent on carving out another chapter in his repertoire of extra-terrestrial feats, Marquez occasionally goes well beyond the limit. A safe second place was just 0.185s ahead with four laps to play. Was there any need to continue pushing the boundaries in such conditions as he had throughout the previous seventeen?

Repsol Honda team boss Alberto Puig was sure his number one rider could have caught the leader “if there were four or five more laps.” His claims of the differences in Marquez’s and Quartararo’s speed were greatly exaggerated, but he may well have a point. At 5.2 seconds back of the leader at the start of lap 21, Marquez was no doubt thinking of ways to place the Frenchman, who has limited experience of such situations, under pressure in any way he could.

Again, here is evidence of the levels of competitiveness that can be so self-destructive in this sport. That urge bit Marquez when he tried to unnerve Quartararo in qualifying at Sepang last year. Now his latest title defence is under serious threat. Surely a rider of Marc’s experience should have accepted second or third safe in the knowledge there would be twelve other chances to stamp his authority all over the class in the coming months?

Yet it’s that kind of mindset that has pushed Marquez to the heights at which he is currently operating. The ‘very best’ are driven in ways that onlookers like me find hard to fathom. To expect anything else would be naïve in the extreme, according to Pol Espargaro. “We know that Marc is always going on the limit and this is his personality. Marc is like this. Those that are saying now that he took too much risk don’t know so much about motorbikes and his results in the past,” said the Repsol Honda rider-to-be.

So, what of the recovery? Early reports from Cat Radio state there has been no damage to the radial nerve in Marquez’s right arm, as had previously been feared. Dr Xavier Mir, who operated on the patient on Tuesday morning told the radio station, “The objective is to return at Brno … if the nerve isn’t affected.”

On Track Off Road has written extensively on the subject of Marquez’s physical power of recovery before. He was back on a bike ten weeks after “serious and aggressive” surgery on a badly damaged left shoulder in the February of last year when the normal recovery time was double that. Performances in Thailand and Malaysia later than year after monumental crashes in the days before further underlined how Marquez has a pain threshold to match his talents.

And while in 1986 Spencer’s disaffection with the sport led to several embarrassing incidents when recovering from his particular injury (his team and bikes were ready and waiting at the second GP of ’86 only for Freddie not to show. His PR manager famously told Motocourse’s Peter Clifford, “Freddie’s out there practicing” on Friday morning when Spencer hadn’t even boarded a plane out of the US), there will be no such sloppiness from the reigning champion.

During his recovery from serious surgery on his left (December 2018) and right (December 2019) shoulders, Carlos Garcia, Marquez’s personal physio, noted: “His head is fantastic. He is always focussed on the target. From the first day until the last one. He always keeps going, keeps going (even) in some bad moments.”

Still, a broken humerus bone is unknown territory for the eight-time champ. Different disciplines place different demands on a rider’s body, but Supercross star Ken Roczen’s eye-watering smash at the start of 2017 required countless operations to put a dislocated wrist and elbow back in place. It took over a year before he was winning again. Justin Bogle was arguably not the same rider after breaking his humerus in 2018.

If Marquez does make it to Brno, it’s no ‘given’ he’ll be competitive. Over 17 days in early August he’ll deal with countless fast changes of direction (Brno) and a series of punishing braking zones (Red Bull Ring twice) that place all kinds of stress on the upper body. Even for a rider that has taken physical preparation and injury recovery to new heights, retaining his world crown for the fourth straight year is a longshot.

But as witnessed during those 17 breathless laps on Sunday, this guy has a habit of defying logic. This latest challenge will no doubt be viewed as another chance to quash our doubts and prove us wrong.